“There is no time for us to be silent any more,” says Manal al-Sharif

For Manal al-Sharif, the self-described “accidental activist” who spearheaded the campaign against the ban on female drivers in Saudi Arabia, the time for women to be silent is over.

Overjoyed by a royal decree last month allowing women to finally get behind the wheel in the ultra-conservative kingdom, the eloquent 38-year-old has now set her sights on the next battle: abolishing the system of male guardianship.

“There is no time for us to be silent anymore,” Sharif told AFP at the Frankfurt book fair, where she presented the German translation of her bestselling memoir “Daring to Drive”.

“Speak up, that is the only way to bring awareness and change things in Saudi Arabia.”

In a country that adheres to strict gender segregation and an austere vision of Islam, the guardianship system requires Saudi women to get permission from a designated male family member on anything from travel to enrolling at university.

Like the driving ban, the male guardianship “has stopped a lot of women from pursuing their dreams”, said Sharif, who has drawn comparisons with the late US civil rights activist Rosa Parks.

To show how serious she is about her new campaign, Sharif rolls back her sleeve to reveal a plastic blue bracelet that reads “I am my own guardian”, alongside a picture of a car.

“We are not minors. We are capable of driving our own lives,” she said, smiling at the pun.

In her book, Sharif charts her unexpected journey to rebellion, culminating in her arrest after she filmed herself driving and posted the video on YouTube as part of the “Woman2Drive” campaign in 2011.

Charged with “driving while female”, she spent nine days in jail in a case that sparked global uproar.

With unflinching honesty, Sharif recounts the hardships she faced growing up in relative poverty in Saudi Arabia’s holiest city Mecca and the struggles she encountered later on as a divorced single mum.

She credits her strict parents with pushing her to excel academically, but also expresses anger over the painful female genital mutilation she had to endure as a child and the domestic abuse she suffered at home, as well as at the hands of her first husband.

She admits to succumbing to radicalism in her youth, even burning her brother’s Backstreet Boys cassettes in what she calls her “extremist days”, because she believed they were “haram” or forbidden under Islam.

“In this book I was very open, I tried to break every single taboo that I could,” Sharif said. 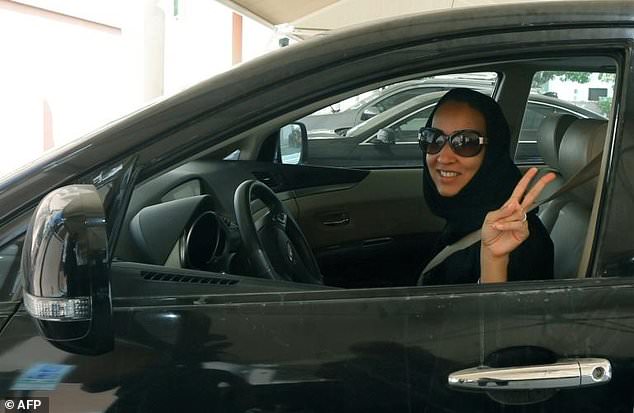 Her top grades eventually led her to become the first female information security specialist at the Saudi national oil company Aramco, where women are allowed to drive within the firm’s compound.

But trying to get around outside as a woman “who had no man in her life” was a constant battle, forcing her to rely on her brother, colleagues or taxi drivers.

One day, after failing to find a ride after a doctor’s appointment, she decided to walk home alone. But a car followed her along the way, leaving her terrified — and fed up.

Emboldened by the Arab Spring sweeping through the region at the time, she decided enough was enough. It was time to drive.

“So it was really a personal struggle,” Sharif said.

“It was really from the fear of being helpless in my own country.”

The memoir ends before the ban is lifted, but Sharif is more than happy to update the epilogue.

“I cried, I was so excited,” she said about hearing the news of King Salman’s decree.

“The first thing I tweeted was ‘Saudi Arabia will never the same again’, I call it the new Saudi Arabia for women,” said Sharif, a prolific social media user.

The decree comes into effect next June, and Sharif is already looking forward to getting in the driver’s seat, legally this time.

“I think it will be the most liberating thing,” she said.

Her book is due to appear in Arabic in November, and Sharif — who divides her time between Saudi Arabia and Australia, where her new husband works — is bracing for the reaction in her home country.

“I know the personal price I will pay for speaking up will be high,” she said.

“Women in my country are always told to be quiet,” she added. “This has led to so many injustices when it comes to women’s rights.”

But the mother-of-two says she has been encouraged by recent changes in the Gulf kingdom.

Men and women danced in the streets of Riyadh last month after they were allowed to celebrate the country’s national day together for the first time, and Sharif excitedly talks about the prospect of women being allowed to study engineering soon.

The changes, which risk upsetting religious hardliners, come as Crown Prince Mohammed bin Salman is introducing economic and social reforms as part of his “Vision 2030” programme aimed at diversifying the kingdom’s oil-dependent economy.

And that includes getting more women into the work force.

“So many things are happening right now that people are saying: ‘Has Saudi Arabia been hacked?'” Sharif said with a smile.

Pfizer and BioNTech file for EU approval of Covid-19 vaccine