Officials have arrested 12 men after 17 year old Khadija Okkarou was kidnapped and sold to a gang who raped and forcibly tattooed her before she was dumped back at her family home near Beni Melal after two months.

The case has sparked outrage in Morocco as it emerged she endured extreme violence during the ordeal with a video was posted online showing her arms, leg and neck covered in tattoos and cigarette burns.

Parents of some of the accused have claimed the girl is ‘lying’, had been living promiscuously and ‘wanted this’. Doctors say she has been badly affected by such accusations.

Speaking at the family home in Oulad Ayad, near Beni Melal, central Morocco, her mother said she fainted when she saw her daughter’s desecrated body. 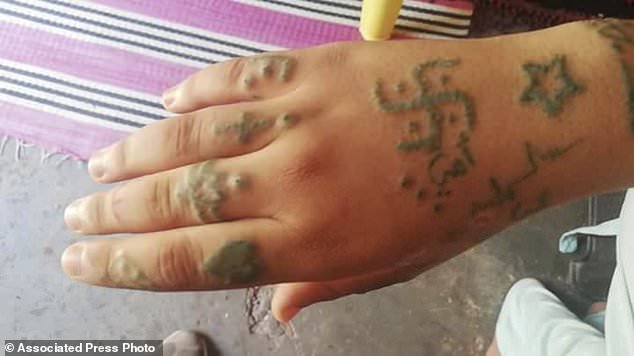 She said: ‘I was caught off guard when those criminals brought my daughter and I saw her in this condition.

‘I fainted … I collapsed, seeing her like that, the tattoos, the burns, her honor lost.’

The mother, who asked to remain anonymous, said: ‘Why did they do this to my child? Are they beasts? Will my daughter ever return to the way she was?’.

The girl’s parents initially refused to report her case to authorities, fearing the social stigma of sexual abuse in a Muslim country.

‘But she insisted,’ her mother said. ‘She picked up the family records and just went to the gendarmes. I followed her.’

Khadija told authorities she was released in mid-August. Protesters have taken to social media to demand justice with the slogan: ‘We are all Khadija’.

In an interview with Moroccan TV last week, the girl alleged that her kidnappers ‘would assault me one by one,’ burned her and didn’t feed her or let her shower.

She displayed crude swastikas and other tattoos as well as cigarette burns on her hands and legs.

The teen said that two men kidnapped her at knife-point when she was visiting her aunt during the May-June holy month of Ramadan, before selling her to other men in exchange for money or drugs. She said her captors gave her drugs that knocked her out for days at a time.

The horrific account has sparked calls for an end to a culture that turns a blind eye to sexual assault and other violence against women, with nearly 75,000 people signing a petition urging action. 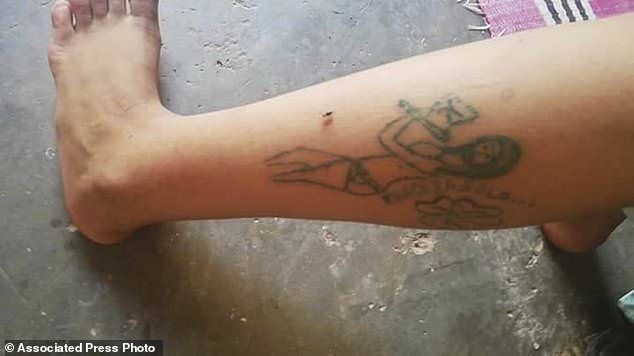 Twelve suspects are in custody in the alleged kidnapping and rape, and three are still at large, according to Ibrahim Hashane, a volunteer lawyer who is pressing the case.

‘Unfortunately, the machismo culture makes some people blame her for what happened to her,’ said Hachane, a member of Morocco’s Association for Human Rights.

Parents of some of the accused have accused the young girl of ‘lying’ and living promiscuously.

In an article titled ‘We are all Khadija,’ Moroccan author and filmmaker Abdellah Taïa, criticized what he called Morocco’s rape culture and called on the government and King Mohammed VI to intervene. It was signed by dozens of Moroccan intellectuals.

Concern about sexual violence gained momentum last year when video footage circulated online of boys on a bus ripping the clothes off a girl and groping her breasts, among other abuse. Neither the passengers nor the bus driver intervened.

Facial recognition system to be introduced to Dubai’s public transport

Oman: Remote learning for all students, except Grade 12