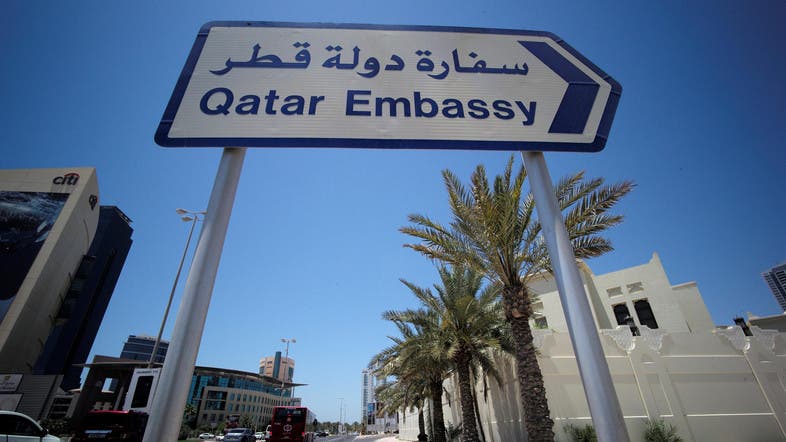 A sign indicating a route to Qatar embassy is seen in Manama, Bahrain, June 5, 2017. (Reuters)

According to Bahrain-based al-Ayam newspaper, Qatar has a long history of hidden hostility toward Bahrain, starting from spying to recruiting Bahrainis to work for Qatar, ever since the two countries gained independence in the 70s.

One of the oldest espionage operations took place in 1987, when Qatari intelligence recruited a Bahraini military man to gather sensitive information about the Bahraini forces and their readiness in the Hawar Islands. The military man was arrested and sentenced to 10 years in prison, but then was released upon a pardon in 1993.

This incident was followed by another spying operation in 1988 when Qatar Intelligence recruited 2 Bahraini employees working at the Ministry of Interior and tasked them with passing sensitive information to Doha regarding the Bahraini armed forces, their formations, movements, bases, airports, warplanes and weapons. The two recruited elements were arrested and sentenced to five years in prison.

In 1996, the Qatari intelligence service attempted to gather sensitive information about Bahrain through an officer named Fahd al-Bakr, in collaboration with a Qatari woman, Salwa Fakhri, who was married to a Bahraini and resident in Bahrain; she was recruited in 1993.

The mission of the 2 agents was to collect information on Bahrain in various areas (including military, economic, social and security fields), the Bahraini leadership visits to the Hawar Islands, information about the government’s relationship with the Shiite community and the names of officers and individuals in the military forces.

The cell, known as al-Bakr cell, was arrested in October 1996; Bakr and Fakhri were sentenced to 3 years in prison before they were released on an Amiri pardon in December of the same year and left for Qatar.

He also received a Qatari intelligence agent and assisted him in taking photos of sensitive and vital facilities in Bahrain.

The military was arrested in the same year and sentenced to 8 years in prison, demoted and discharged from military service.