To really test a cars’ capability, handling and power – it’s vital to have a great location and roads to drive it. In early February I trekked to a very foreign environment to test a new car; the arctic. I was invited by Audi Middle East for the international launch and drive of the all new Audi RS Q3 Sportback in Arvidsjaur, Sweden… aka Narnia! It’s the land of the northern lights, elks, reindeer and of course the land of innovative automotive testing.

After an overnight stay in Stockholm we took a chartered flight way up into the north of Sweden, it was fascinating watching out of the plane window the terrain change from greenery to a blanket of white within 90 minutes. It was so picturesque and quite a shock to the system to step out into -15 degrees Celsius.

Not long after checking into our comfortable abode for the night and a quick briefing, it was out into the ice world to pick our ride for the day. Of course, I fought my way to get my hands on the Kyalami Green RS Q3 Sportback. Without hanging around, I set off for an adventure into Arvidsjaur. I was immediately impressed with how responsive the car is, and how well it handled in the snowy terrain. I’d never driven in conditions like it, so I began a little cautious (and nervous), but it didn’t take long to get a feel for how the car and the quattro system handles. My confidence grew, and I started to have some fun.

So why go for the RS badged Q3 rather than the standard Q3? For starters, there’s no lack of power in the RS Q3 Sportback, for a small sporty compact SUV it’s bursting at the seams with power and technology. It’s equipped with the multi award-winning 5 cylinder engine that produces a whopping 400 horsepower (which is 60 extra horses compared to its predecessor and 26kg lighter engine) and it does 0-100kph in 4.5 seconds with a top speed of 280kph. How about them apples?!

Audi is setting new standards when it comes to sporty design in their RS range. The new RS Q3 Sportback an aggressive front and sits 10mm lower than the normal Q3, has the mean-looking gloss black honeycomb structure grill, RS bumper with large side air inlets with striking boomerang-shaped blades which are exclusively designed for the RS Q3 Sportback.

At the rear, there’s big improvements from the first-ever RS Q3 Sportback from 2013 in exterior design. I struggle to take sporty SUV’s seriously if they have just one exhaust – which was the case with the first generation, but the new generation comes with a dual-branch RS exhaust system with chunky oval tailpipes on both sides. It sounds great too.

The interior of the car mirrors the athletic look of the exterior. It has the RS sport seats with the honeycomb pattern, RS sport leather steering wheel with shift paddles and a large user-friendly MMI touch display which is tilted toward the driver. There’s been no compromise on comfort or space and my body gripped well to the seats at high speeds and sharp corners.

The second day of driving was even better than the first as we took the cars on a frozen lake. This is where the real fun was at. In fact, this was the most excitement I’d ever had testing a car, even more so than on a track. What’s more, you learn so much about the car and in this case – the quattro technology. It was incredible to feel how the car handles with the traction switched off. It took several laps of practicing and some laps with one of the Audi driving experts who taught me a few tricks in handling on ice and before I knew it I’d really gotten the hang of it. I did get a bit too big for my boots on two occasions and landed into a heap of snow (see image). 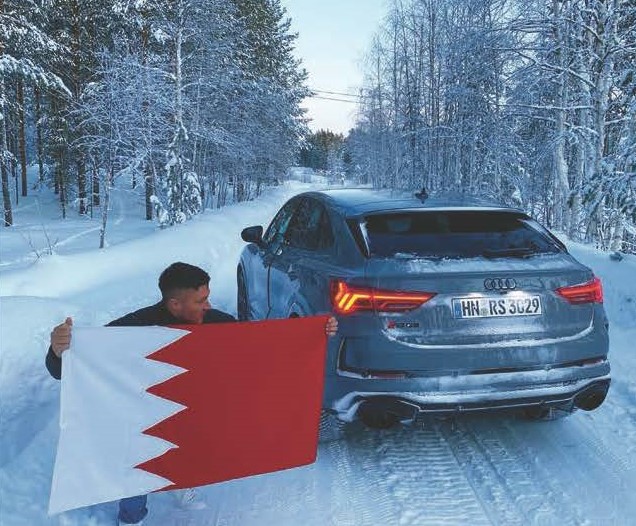 Whilst it’s packed with performance, the new RS Q3 Sportback is a fully fledged five-seater that offers everyday usability. When the car is in its ‘comfort’ mode, it drives smooth and effortlessly. And for its size, it would be a sound SUV for either a small family or an individual.

A Weekend With Audi