The policeman killed in the blast was identified as Salman Anjum, according to multiple media reports.

“The incident took place on Khalifa Bin Salman Highway at 5:26 pm,” the Interior Ministry confirmed the attack in a  statement.

“Militants targeted the bus using a local-made bomb and detonated it distantly,” the ministry said.

“Investigations are underway to determine the circumstances of this premeditated terrorist attack and arrest the group involved,” the ministry said in a statement on its website.

The blast destroyed the vehicle and caused several ‘serious to medium’ injuries to the policemen travelling inside.

“All the injured policemen were immediately rushed to the Military Hospital in Riffa. Three of them are in a critical condition,” a reliable source told DT News.

According to the source, the bomb went off near the big roundabout near Budaiya Highway.

“The blast resulted in the bus coming to a halt on the side of the road,” the source said adding: “They were then attacked by a group of people carrying a heavy machine gun.” 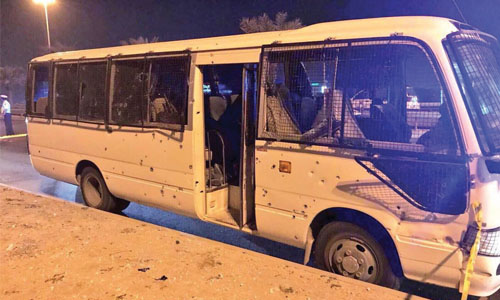 The ministry, in a statement, said, “Efforts continue to identify the persons involved and bring them to justice.” “Relevant procedures are taken,” the ministry said.

The statement provided no further details about the attack or who was thought to have carried it out.

Meanwhile, a group named “Waad Allah Brigades” claimed responsibility for the attack saying, “The operation was for avenging our fallen men” in reference to terrorists killed in clashes with security forces earlier this year.

Police later closed the section of the highway between the big roundabout and Seef district intersection.