The government of Bahrain reiterated Wednesday its restrictions on the operations of Qatar Airways, requiring all aircraft not registered in Bahrain to obtain prior approval to fly in or out of Qatar through Bahraini airspace. Whether this applies to U.S. military aircraft stationed in Qatar is not clear.

The onerous restrictions allow Qatar Airways to continue flights only by transiting Bahraini airspace through two airways into Iranian territory. Western bound flights must swing wide from Iran into Turkey.

In an email, Khalid Al-Sada from the Bahraini Flight Permission Team confirmed the tight restriction remains in effect.

Non-Bahrain registered aircraft operating into the country now must request approval from the Bahraini government, a process that can take days.

“This shows an escalation,” said Mark Zee, of OpsGroup, a flight service consultancy. “The intent is to make it as difficult as possible for everybody to get in and out and the reason that Bahrain is so critical is because it essentially controls the airspace that Doha and Qatar sit under.”

It is not clear if the restrictions include aircraft operated by the U.S. military at Al Udeid Air Base, which houses 10,000 U.S. troops and is used to support American operations in Afghanistan and Iraq though Zee believed it would not.

As a member of the Oneworld Alliance, Qatar airplanes are carrying travelers on tickets sold by other alliance members including American Airlines, British Airways and Japan Airlines. And while Qatar Airways says it will re-accommodate them on flights, first they have to get out of Doha, a process that is getting increasingly difficult given the airway choke points now in effect and the pressure on the airline to evacuate Qatari citizens from Saudi Arabia, the Emirates and other countries that have cut relations.

The airline is working “tirelessly to ensure that all passengers were brought home safely to Doha within 24 hours of the flight cancellations,” Akbar Abu Baker, the airline chief said.

Things are sure to get worse before they get better, though, now that Jordan and Mauritania have joined the list of Middle Eastern countries that have cut diplomatic and economic ties with Qatar, alleging that it supports extremist Muslim groups. Is this what President Trump had in mind when he bragged via tweet: 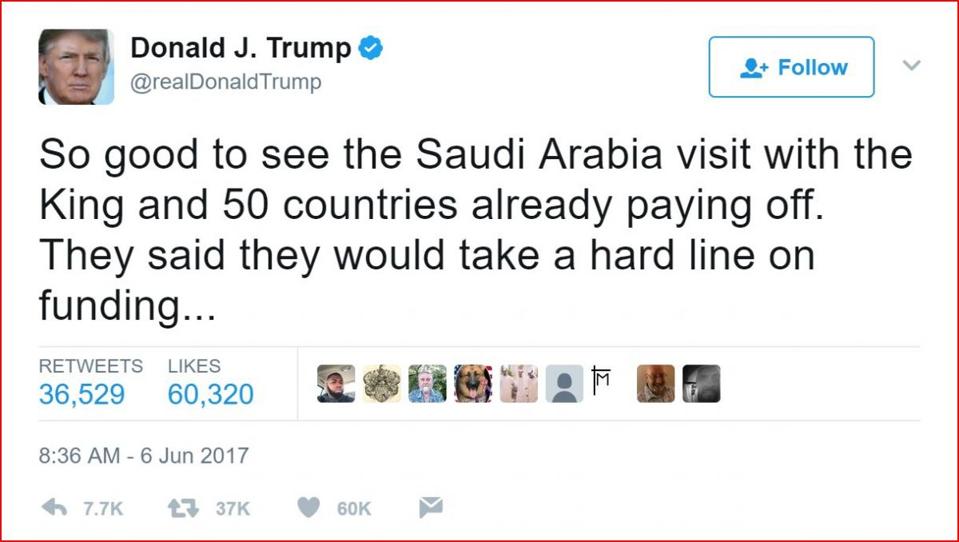