While the introduction of cinemas into Saudi Arabia has been happily welcomed, a blogger who was jailed for expressing his opinion in Saudi Arabia is not too impressed.

Raif Badawi, 33, was sentenced to ten years in prison and corporal punishment in 2013 for ‘insulting Islam through electronic channels’ after creating a website called Free Saudi Liberals.

When news of the Riyadh screening of Black Panther broke, he took to Twitter to remind the world of his case. 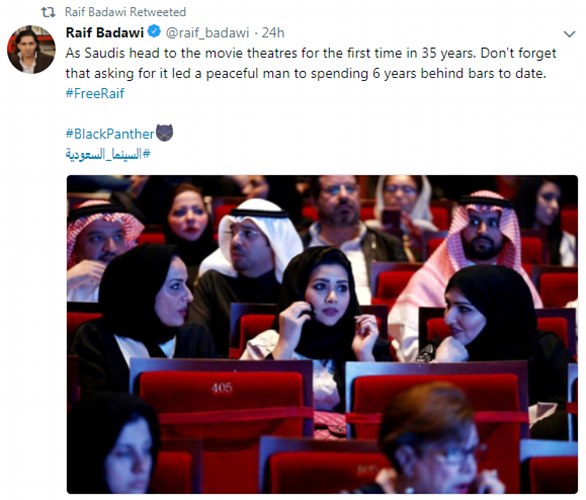 He wrote: ‘As Saudis head to the movie theatres for the first time in 35 years. Don’t forget that asking for it led a peaceful man to spending 6 years behind bars to date.’

Badawi was first detained in 2008, but released after questioning. He was arrested again in June 2012 before his conviction in 2013.

In December 2015, the European Parliament gave Badawi the Sakharov Prize for Freedom of Thought.

His wife, Ensaf Haidar, who fled to Canada with the couple’s three children in 2013, has fought to keep his case in the spotlight.

In September last year, she told the UN: ‘Ironically, some of what [Badawi] was demanding is already being implemented in Saudi Arabia.

‘Indeed, Saudi Arabia spoke of these reforms when it was elected as a member of this council. And yet Raif is still in prison.’

Israel’s EL AL to operate 14 weekly flights to Dubai from...

Covid-19 vaccine will be free for Saudi Arabia residents