A British woman is facing jail in Dubai after her friends got into a fight with a Swedish tech executive, when he caught them taking selfies with him as he was sleeping in a hotel lobby.

Asa Hutchinson, 21, claims she was not involved in the fight with the Swede, and had only picked up the man’s glasses from the floor and ‘put them in the bin because she was worried someone would step on them’.

Ms Hutchinson, originally from Chelmsford, Essex, says that as her friends were just visiting tourists, and she is living in Dubai, she has ended up facing charges of assault and theft alone. 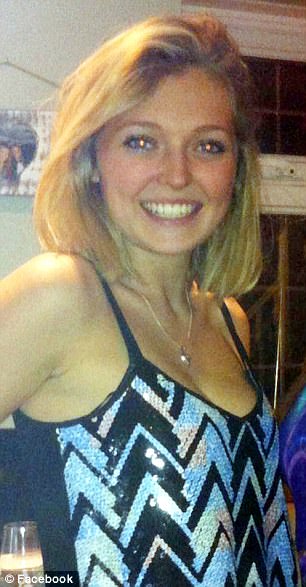 Facing jail: Asa Hutchinson, 21, has been charged with assault and theft after her friends got into a fight with a Swedish man in Dubai

Her mother Lucie Harrison has today defended her daughter, saying she is ‘absolutely and completely innocent’.

‘She was there at the time but all she did was pick some glasses up off the floor and put them in the bin because she was worried someone would step on them.

Ms Hutchinson herself has said that she and her friends had been to a brunch at Dusty’s in Dubai’s International Financial Centre district when they spotted a man who had fallen asleep on a sofa.

She describes how her friends began taking selfies with the sleeping man, Swedish a technology company executive in his 50s, when he suddenly woke up.

According to Ms Hutchinson, the man became angry and began punching her friends.

‘The man woke up and began punching the boys. I heard the commotion and came back to see what was going on.’

The group left, but unbeknownst to them, the unnamed Swedish man contacted police.

‘He called the police and made official complaints about the boys for taking pictures of him, and for being rude.’

Police obtained the group’s names from the reservations list of the hotel restaurant and they were called in to a police station.

Ms Hutchinson says her friends managed to get their passports back by paying cash deposits, before flying home to the UK, but as an expat living in Dubai, she has ended up taking the full hit on their behalf.

She has been charged with assault and theft  – the man is accusing her of having stolen his glasses them – and there is a real threat of a custodial sentence.

Ms Hutchinson, a key account manager for a transportation company, says: ‘It is so unfair, I was not involved, I just happened to be there, but the police are not interested in anything I have to say. 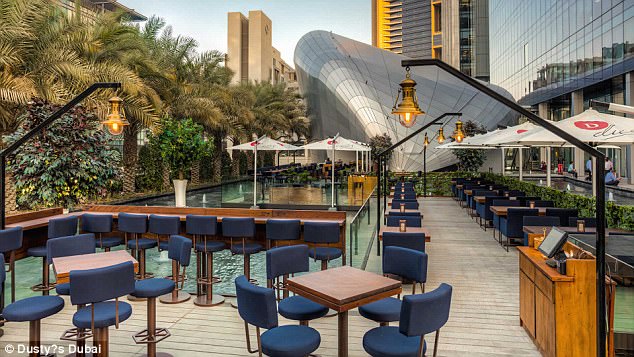 This computer generated image shows the outdoor seating of Dusty’s, the hotel restaurant where the group had been enjoying brunch before the fight

Radha Stirling, CEO of Detained in Dubai, the organisation representing Ms Hutchinson, said: ‘Visitors to the UAE need to be aware that justice does not operate the same way as it does in countries with mature legal systems.

‘In Dubai, if two parties are in dispute or arguing, the first person to speak to the police is usually the one who is believed.

‘Often it is a race to get to the police first.

‘By making this complaint, the man may have been safeguarding himself from being charged himself.

‘Also, it is clear in this case that Asa was a bystander, not involved with the fight and is only being victimised because the alleged culprits have left the country.’