A woman in wearing a niqab has become the first person in Denmark to be fined under new laws banning full-face Islamic veils.

A 28-year-old female was fined after getting into a fight with another woman, who had tried to tear of her veil.

Police were called to the scene and reviewed CCTV footage of the incident, which took place in a shopping centre in Horsholm, around 15 miles north of the capital Copenhagen yesterday. 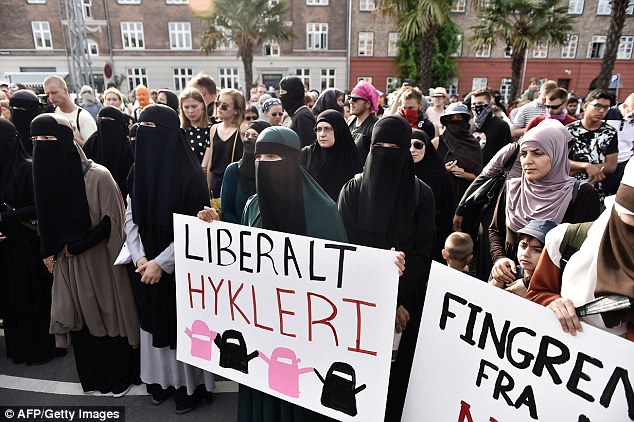 She was told she would be fined 1,000 kroner in the post, and was told to remove her veil or leave the public space, but decided to keep on her headwear.

Police officer David Borchersen said: ‘During the fight her niqab came off, but by the time we arrived she had put it back on again.’

Denmark introduced a law on August 1 where people wearing a burqa, which covers a person’s entire face, or a niqab, which only shows the eyes, while in public carries a fine of 1,000 kroner.

Repeated offenders could be fined as much as 10,000 kroner.

Balaclavas, masks, false beards and other accessories are included in the ban.

The law does not mention mention burkas by name, but reads ‘anyone who wears a garment that hides the face in public will be punished with a fine’.

Human rights campaigners have slammed the ban as a violation of women’s rights, while supporters argue it enables better integration of Muslim immigrants into Danish society.