Fire ‘spread rapidly’ through a skyscraper in Dubai’s world-famous Marina in the early hours of this morning.

Burning debris could be seen spiraling down to the ground below as firefighters desperately tackled the blaze.

The same skyscraper was devastated by fire in 2015 and the building’s flammable cladding, which was similar to that used in Grenfell Tower, was blamed for fuelling the flames. 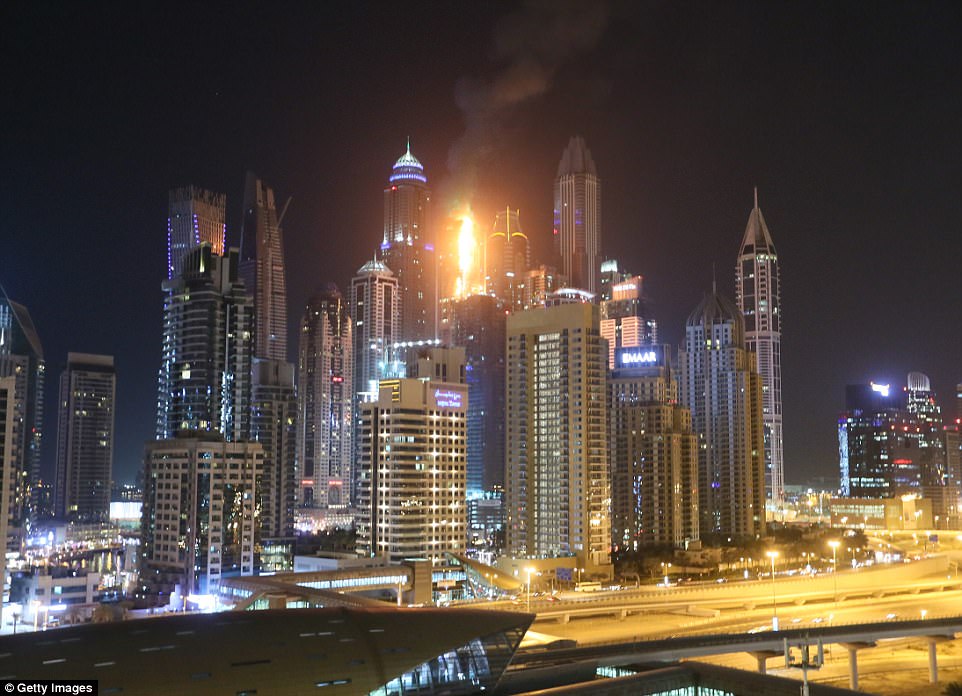 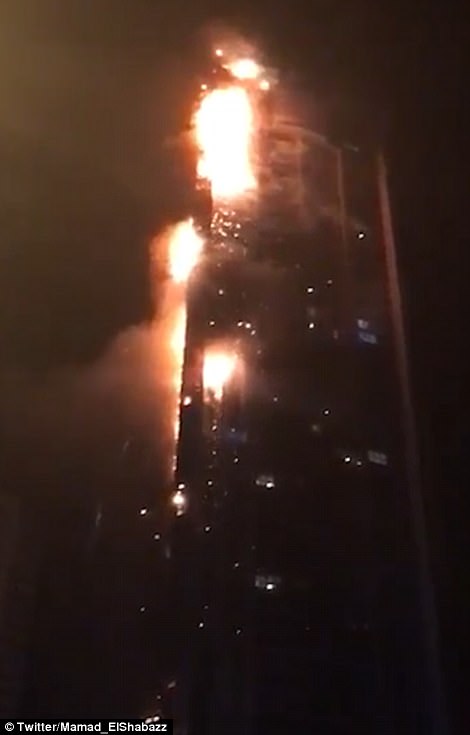 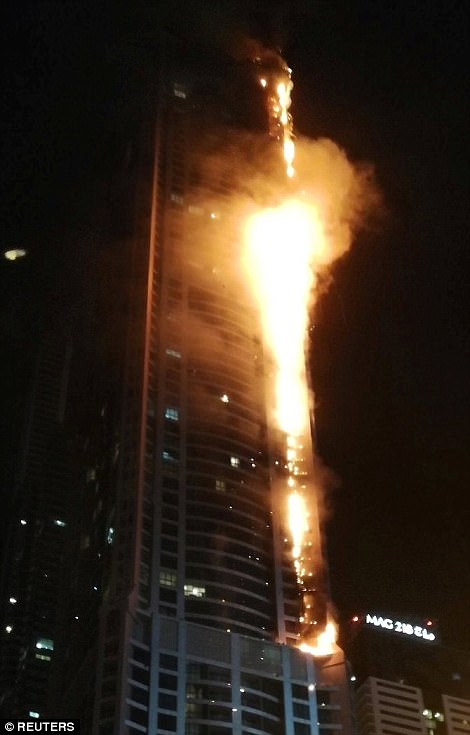 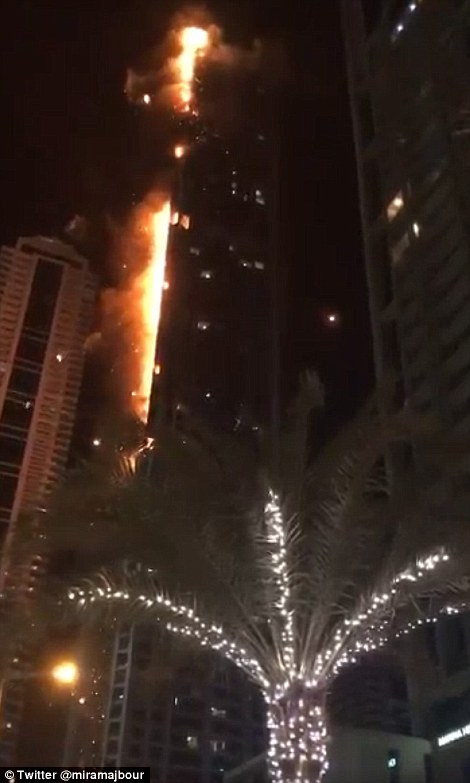 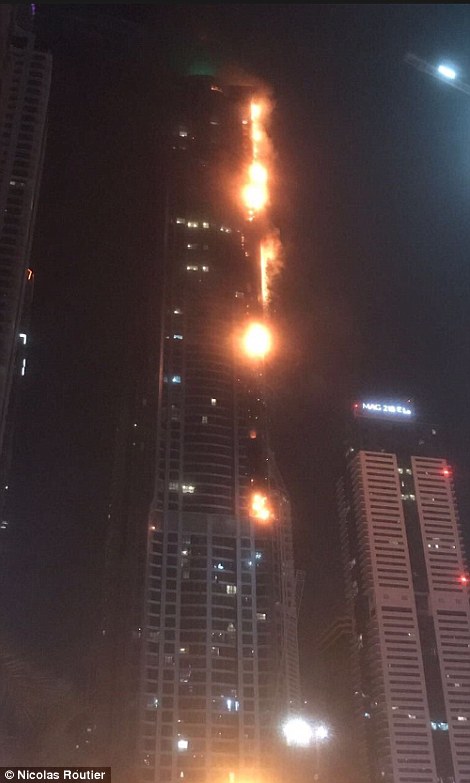 Horrified Dubai residents and tourists shared photos and videos of the flaming debris falling from the building.

Twitter user Ernesto Che Guevara said: ‘If you are in there get out! It’s spreading rapidly up the building.’

Cara Spillane added: ‘Terrifying to see Torch Tower, in the area I live in on fire now. Hope everyone gets out OK.’

The Dubai Media Office confirmed the civil defence was tackling the fire and no injuries had yet been reported. 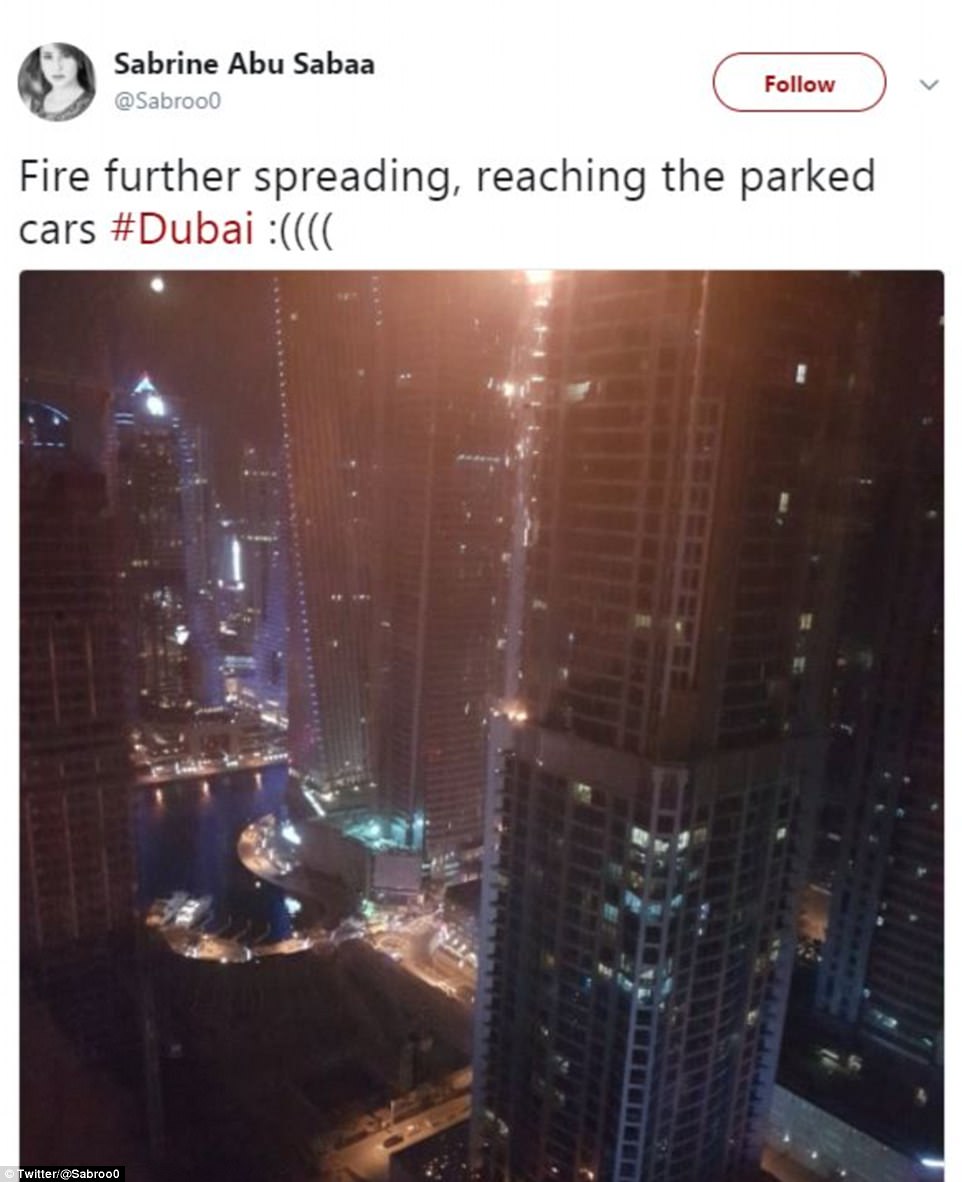 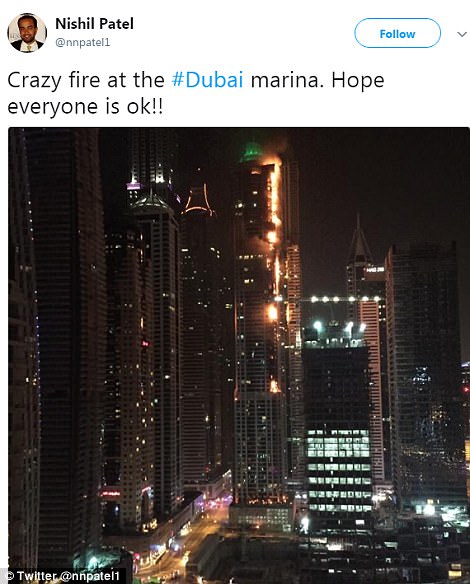 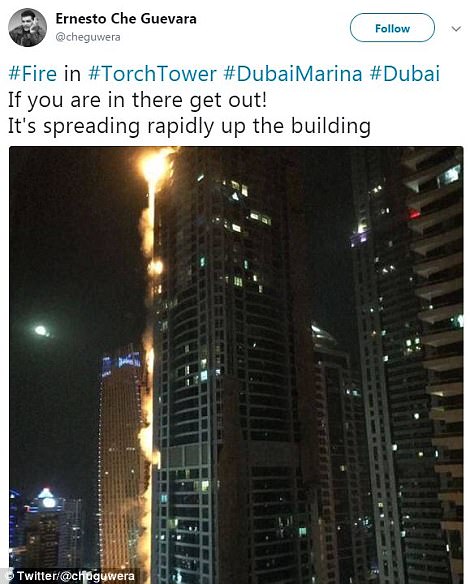 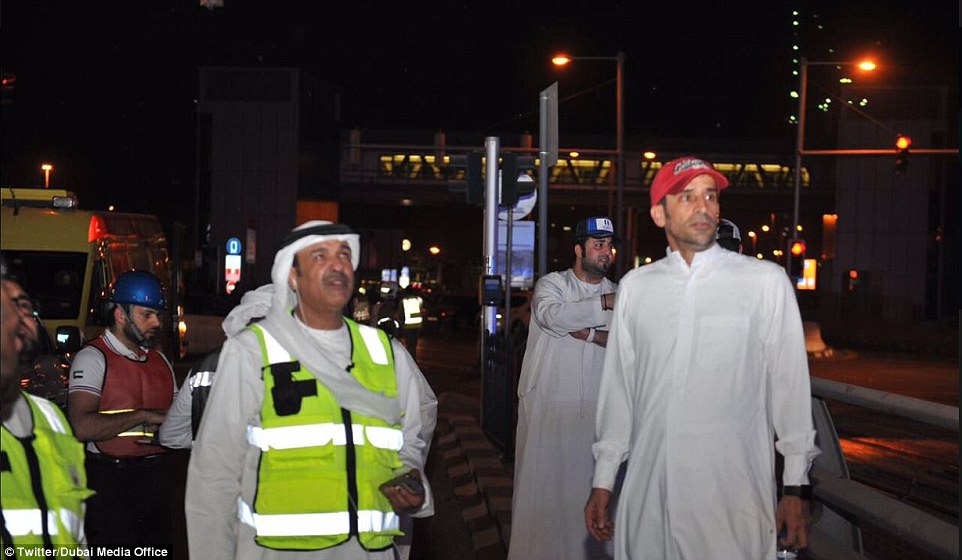 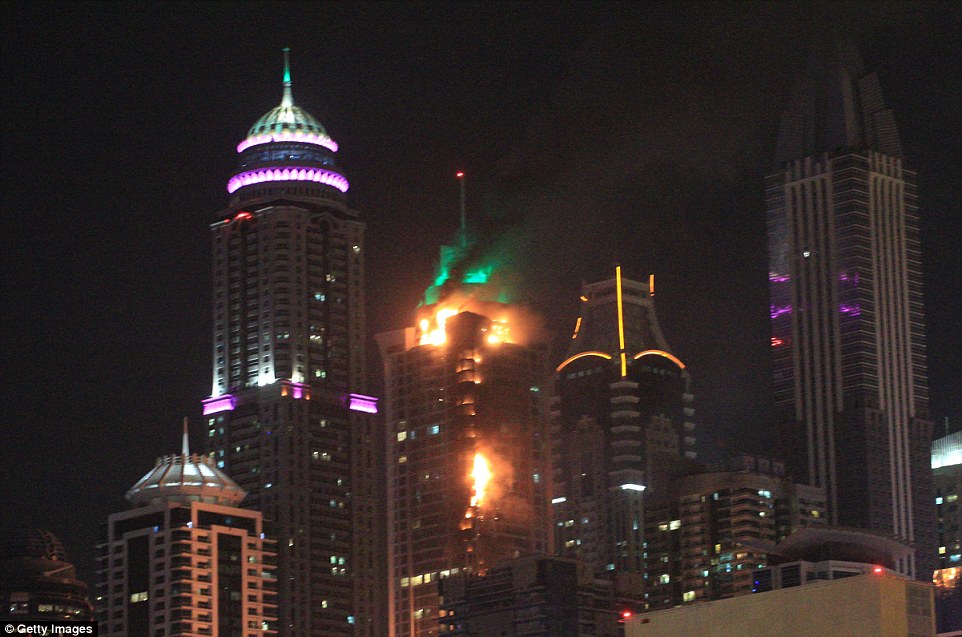 The cause of the fire is not yet known but civil defence officials said they had ‘successfully evacuated’ the building and were investigating. 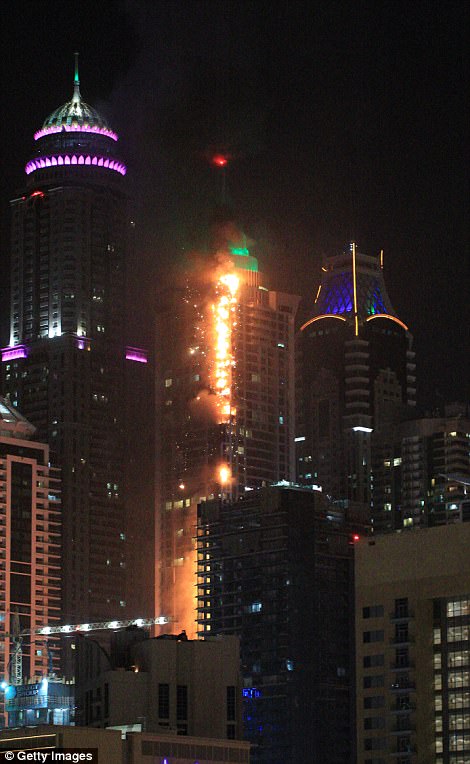 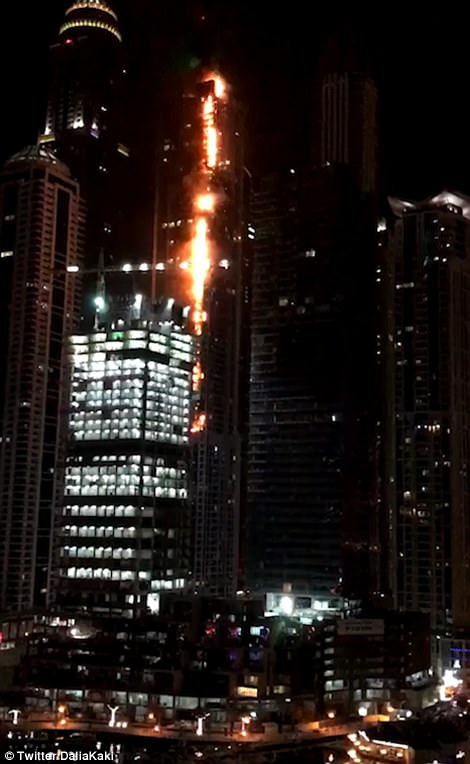 The Torch Tower is the fifth tallest residential building in the world and stands at more than 330 metres (1,105 ft). 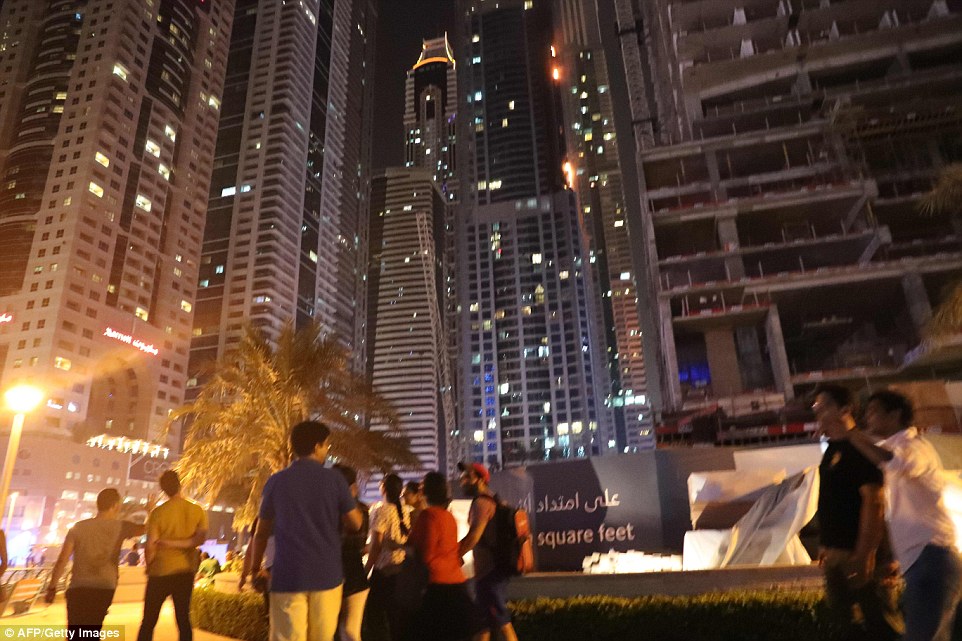 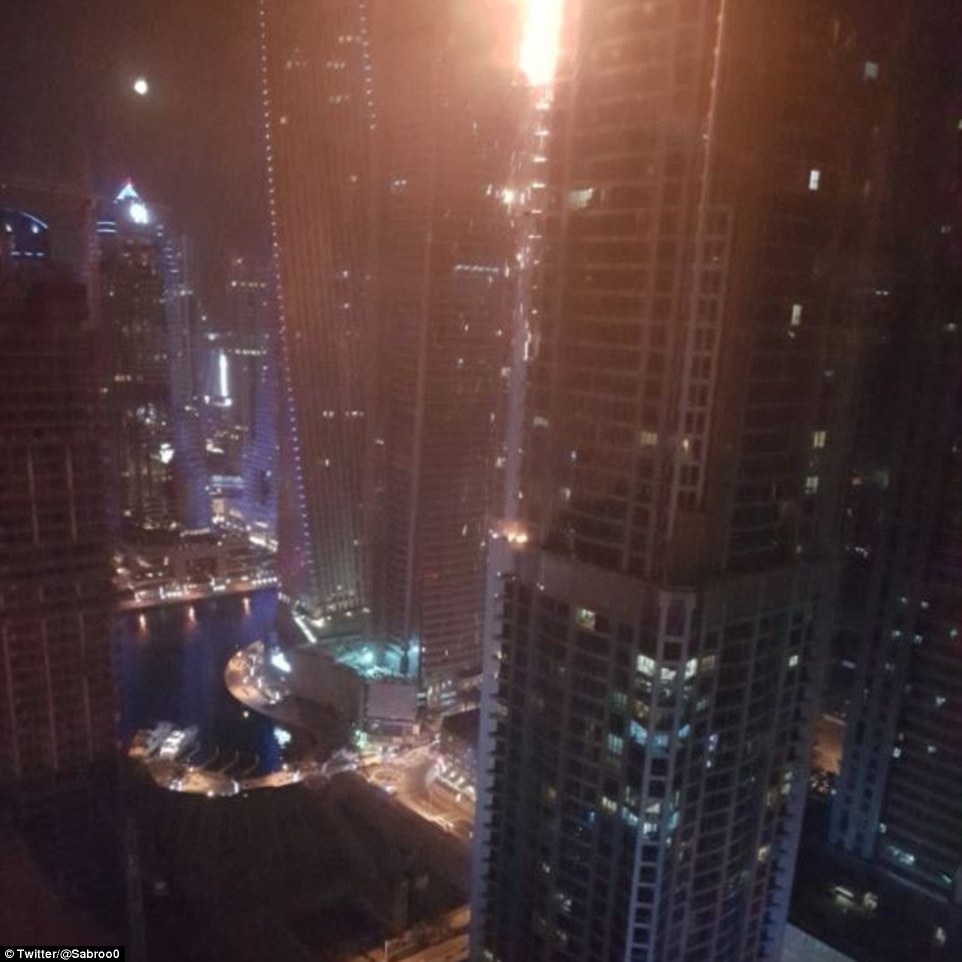 The Torch Tower is the fifth tallest residential building in the world and stands at more than 330 metres (1,105 ft).

It became the tallest residential building in the world in 2011 but lost the record the following year to the neighbouring Princess Tower.

In February 2015 hundreds of residents were evacuated from the same building after it was engulfed in flames in the early hours of the morning.

The blaze ripped through multiple floors of the new building, in the expat-heavy Marina district of the city.

Flames shot out from two sides of the building and glass and metal rained down from the skyscraper.

After a series of recent fires, Dubai is introducing a new code for skyscrapers this year, insisting that full-scale mockups of the facade are fire-tested rather than just the individual materials. 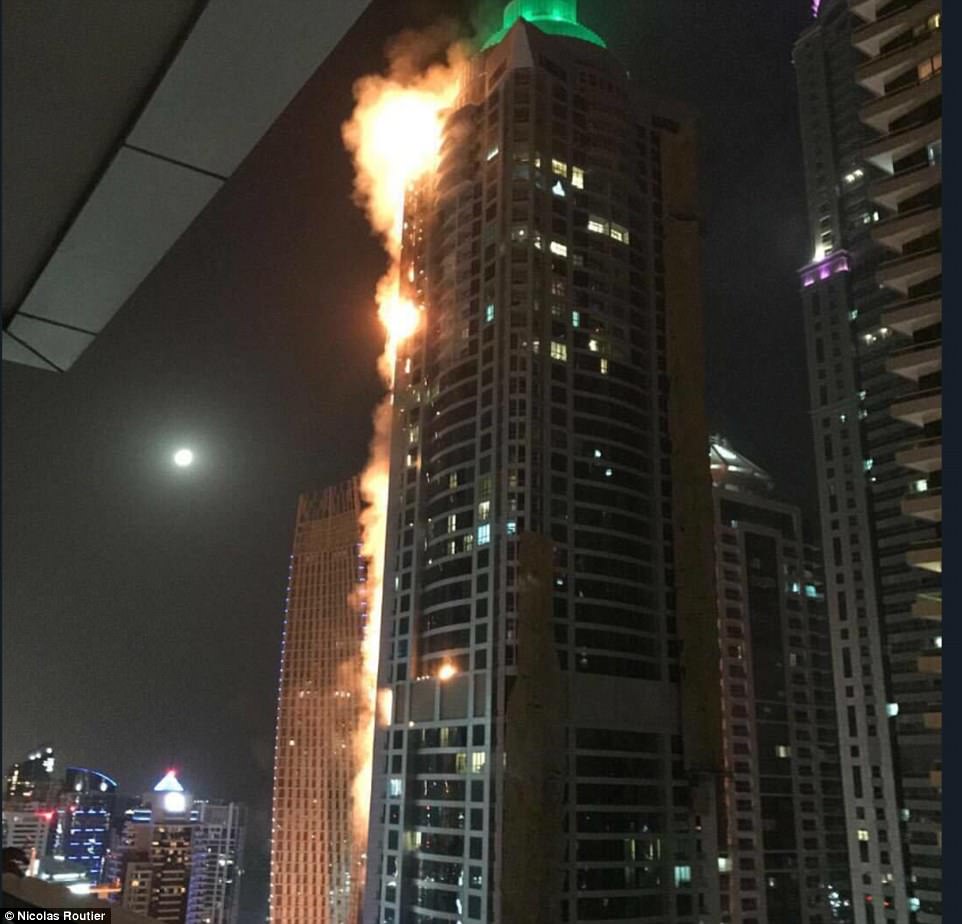 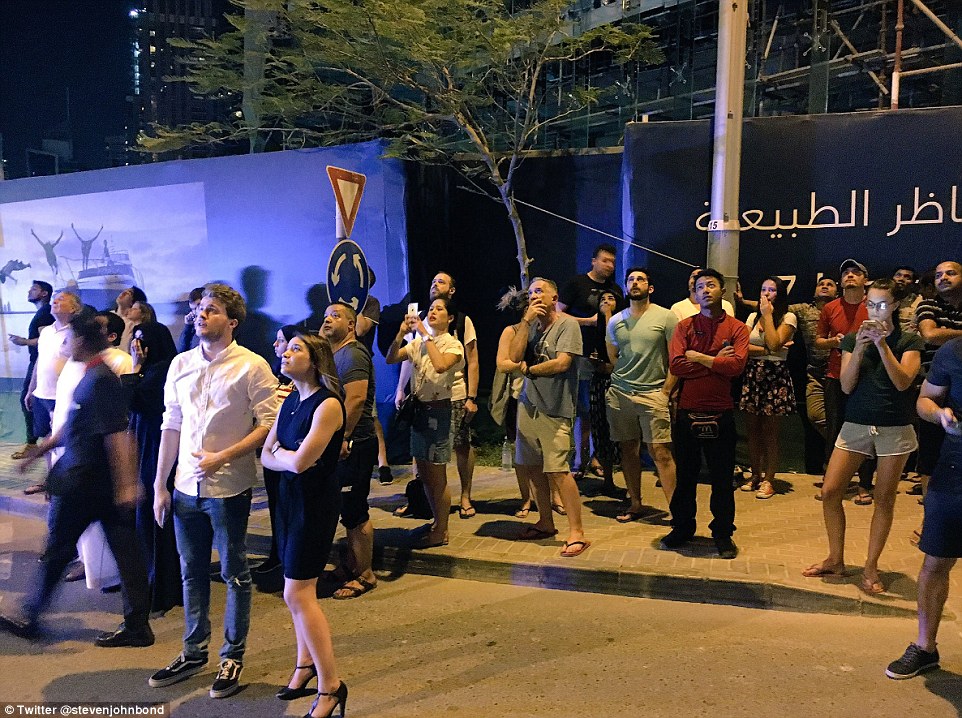 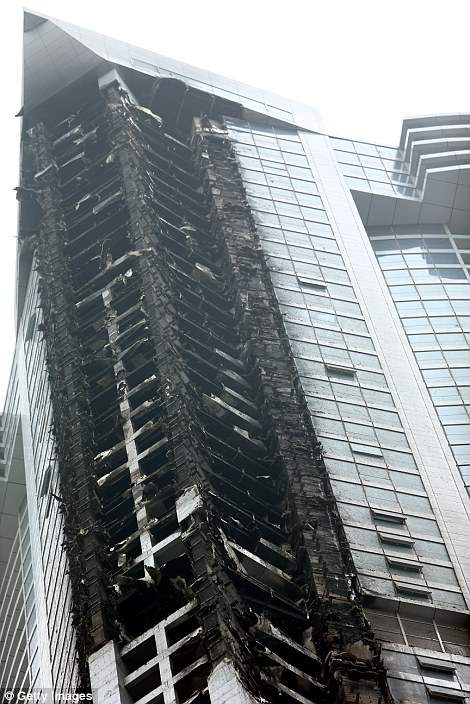 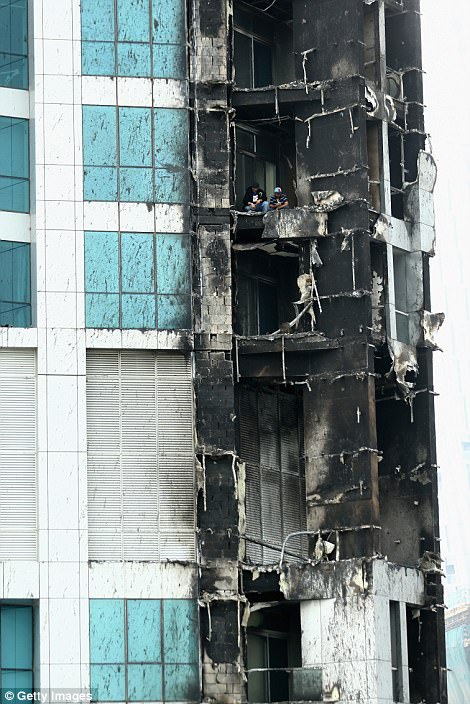 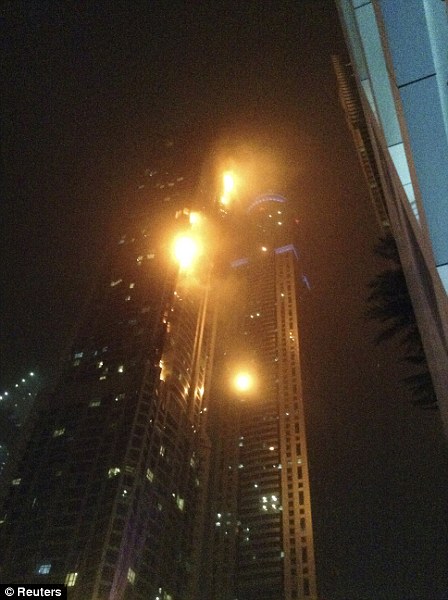 More than a dozen fire were called on to extinguish after the fire alarm went off around 2am local time.

One witness said flames shot out from two sides of the building as glass and metal rained down from near the summit of the skyscraper.

Two residents of the Torch, who were evacuated from the building, were told the fire started on the 52nd floor. They said the flaming material fell and set lower parts of the building ablaze.

Residents of at least one neighboring tower were told to evacuate as a precaution because of strong winds, but they were later allowed back inside.

The director of Dubai Civil Defence, said the fire ‘proved Dubai Civil Defence’s ability to control the fire and stop it from spreading to the tower’s other wings and to nearby buildings by following strict protocols to break in quickly and reach the source of the fire on the 51st floor.’

He added: ‘As daylight broke, residents waiting to check the extent of the damage at their homes could see the external cladding on the corners of the building was charred black and mangled for dozens of floors.

‘Clean-up crews dressed in orange uniforms swept up pieces of shattered glass and other debris covering the street outside the building.’