Residents in the UAE’s Northern Emirates, and further south towards Dubai and Abu Dhabi, reported feeling tremors following a 5.8 earthquake that occurred in the vicinity of Iran’s Qeshm island, off the coast of Bandar Abas about 4.30 pm.

Iran’s Fars news agency reported quake on Sunday, but did not give any information regarding possible casualties or damage caused.

A 5.7 Magnitude Earthquake on Richter scale is recorded in South of Iran at 16:30, 2020-02-16 "UAE time” According to the NCM “National Seismic Network, Slightly felt by residents without any effect.

The UAE’s National Center of Meteorology confirmed the incident on Twitter, saying the incident occurred at 4.30 pm UAE time, which was “slightly felt by residents without any effect”.

Local media reported that the tremors were felt in Ajman, Dubai and in Abu Dhabi. 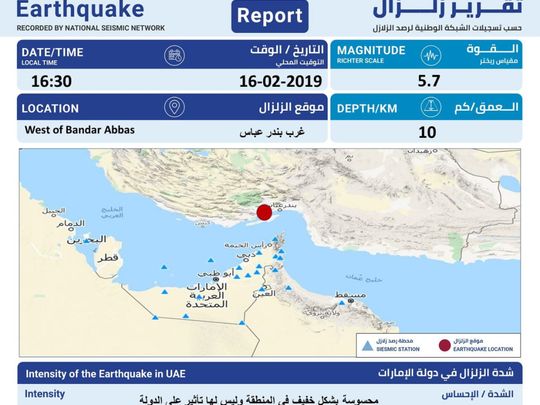