Egyptian archaeologists have discovered a mummy in one of two previously unexplored tombs, the antiquities ministry said on Saturday.

The tombs were found across the Nile from the southern city of Luxor in the 1990s by German archaeologist Frederica Kampp. However, she had only reached the entrance gate and ‘never entered’, the ministry said.

It said that both tombs, which were given numbers by Kampp, were likely to date back to dynasties of the New Kingdom, which lasted several centuries until about 3,000 years ago. 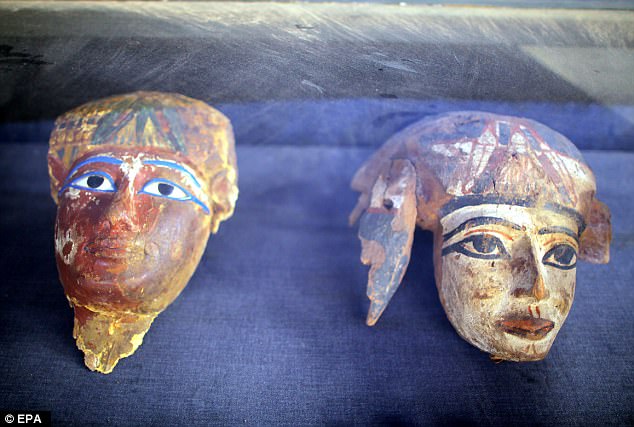 In addition to funerary items, archaeologists found ‘a mummy wrapped in linen’, the ministry said, adding that ‘studies suggest the mummy could be for a top official or a powerful person’.

The owner is unidentified, though the ministry said they have two possible identities.

The tomb might belong to ‘a person named Djehuty Mes whose name was engraved on one of the walls’, the ministry said.

Or it could belong to ‘the scribe Maati as his name and the name of his wife Mehi were inscribed on 50 funerary cones found in the tomb’s rectangular chamber’.

The other tomb was not excavated and only ‘uncovered’ in April, the ministry said, adding that the tomb’s owner is not yet known.

‘The tomb has a court lined with stone and mud-brick walls. It has a six-metre deep burial shaft at its southern side that lead to four side chambers,’ the ministry said.

‘Studies reveal that the tomb was reused in antiquity,’ it said.

The tomb contains several artefacts and a depiction of ‘a person, probably the deceased’s brother, presenting offerings and flowers to the deceased and his wife’.

The Antiquities Ministry has made a string of discoveries since the beginning of 2017 in several provinces across Egypt – including the tomb of a royal goldsmith in the same area and belonging to the same dynasty, whose work was dedicated to the ancient Egyptian god Amun.

Classes to resume at British School of Bahrain tomorrow