Hundreds of women were filmed snatching clothes off racks in Saudi Arabia during a sale in early May. 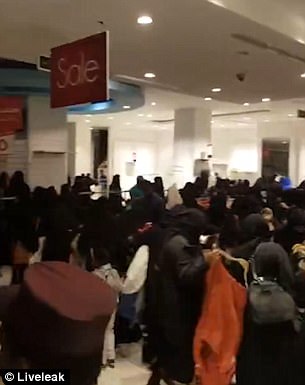 Footage taken in department store, shows a large amount of women desperately grabbing clothes off several hangers in the shop.

Brightly coloured skirts and t-shirts are seen being ripped off hangers and flailing in the air as the women battle to get the best bargains.

At one point, two clothing racks collapse under the sheer weight of the women’s forceful nature towards the hangers.

The camera then pans around the shop showing a security guard and a young boy laughing at the situation, while other women are seen calmly observing the chaos and talking to each other.

Another man is also seen filming the scene.

It is not clear which shop the video was filmed in or when it was recorded.

UAE Seeks to Verify Credentials of Pakistani Pilots in its Airlines