Hundreds of camels have died of thirst after Qatari farmers were expelled from Saudi Arabia during a diplomatic rift and forced to trek across the desert.

Animals collapsed at the border between the two nations as only a few hundred camels were allowed to cross each day. 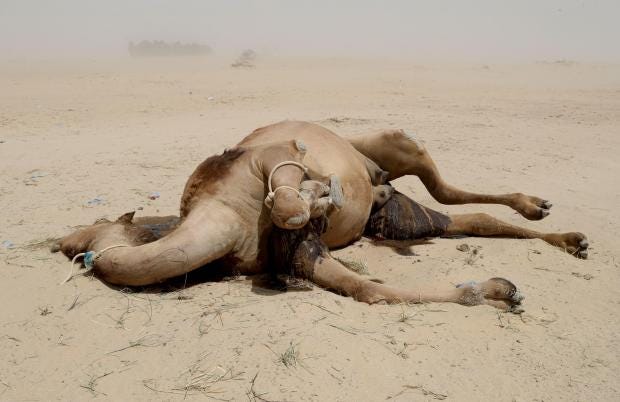 Other animals were left to die by the side of the road. Some farmers left immediately, while others and their animals were still travelling back two weeks after the diplomatic rift.

Camel owner, Said Al Hajari said: “It was hard, the camels were exhausted because they did not know which way to go.”

Camel owner, Hussein Al-Marri, from Abu Samra, said: “I have returned from Saudi Arabia. I myself saw more than 100 dead camels on the road as well as hundreds of lost camels and sheep.”

On the Qatari side of the border, the environment ministry provided shelter, water and food for more than 8,000 camels after the fall-out was announced.

Officials said veterinarians and animal experts had also been mobilised to help and that more shelter in Qatar would be allocated soon, as reported by The Peninsula newspaper.

Conflicting reports say that between 12,000 and 25,000 animals have fallen victim to the Gulf diplomatic crisis.

Farmers from Qatar, which measures 4400 square miles, often graze their animals in the larger, neighbouring state.

In early June Saudi Arabia, Kuwait, Egypt and the United Arab Emirates broke ties with and blockaded Doha due to its close ties to Iran and alleged links with extremists.

A spokesperson for international animal charity SPANA said: “All too often around the world, working animals and livestock become the forgotten victims of conflict and political disputes.

“It’s a situation we’ve seen countless times before – in Somalia, Mali and many other locations.

“It is critical that the welfare of animals is prioritised and that they receive essential requirements such as food, water, shelter and access to veterinary care.

“It’s also important to remember that the communities that depend on working animals worldwide are usually the poorest in society – these animals are often all they have and are absolutely crucial to their livelihoods. The loss of their animals can have devastating consequences for vulnerable families.”