Named world press photographer of the year four times and an Oscar nominee – for his war documentary Restrepo – he was one of the most respected members of his profession.

However, his relentless drive to document the impact of war would cost him his life. The 41-year-old Briton was killed alongside American journalist Chris Hondros in a mortar attack while covering the Arab Spring, in Libya in 2011.

Now, to mark the seventh anniversary of his death, the Imperial War Museums – which has acquired his complete archive – has revealed some of his photographic treasures.

The collection comprises his seminal photography and video work from his embeds in Afghanistan (2007-2008), Liberia (2003-2006) and Libya (2011), reflecting his work as an intrepid conflict journalist but also as a humanitarian and an innovator. US soldier Tad Donoho screams with pain after being given a ‘pink belly’ for his birthday in Korengal Valley, Afghanistan in 2008. The ritual sees junior-ranked soldiers hit in their stomach until it turns pink and starts to bruise. 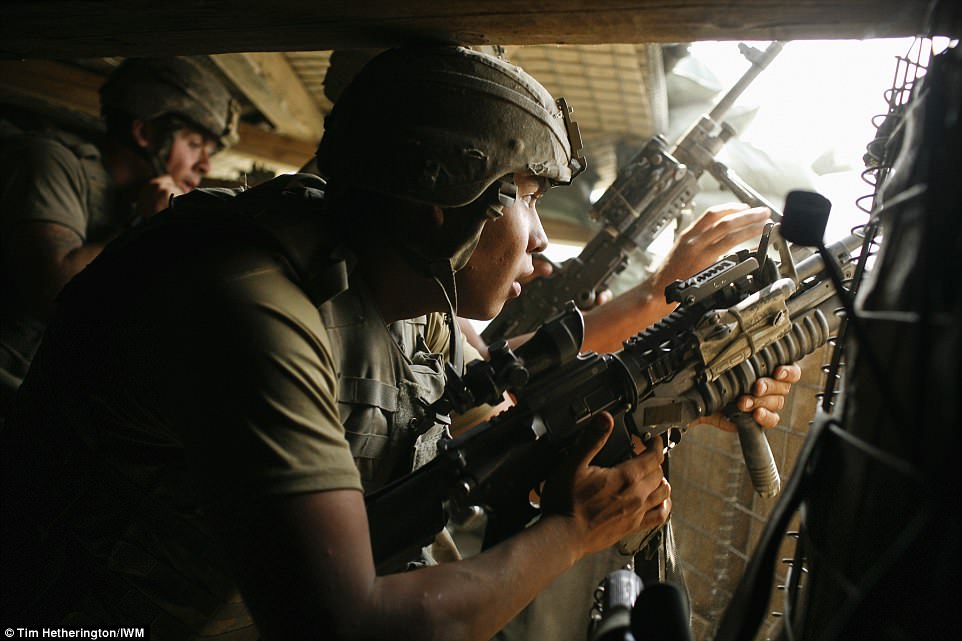 US troops coming under attack from Taliban forces man their observation post, named Restrepo. Photographer Tim Hetherington made an Oscar-nominated documentary in 2010 (called Restrepo) which chronicled the deployment of a platoon of American soldiers in Korengal Valley from 2007 to 2008 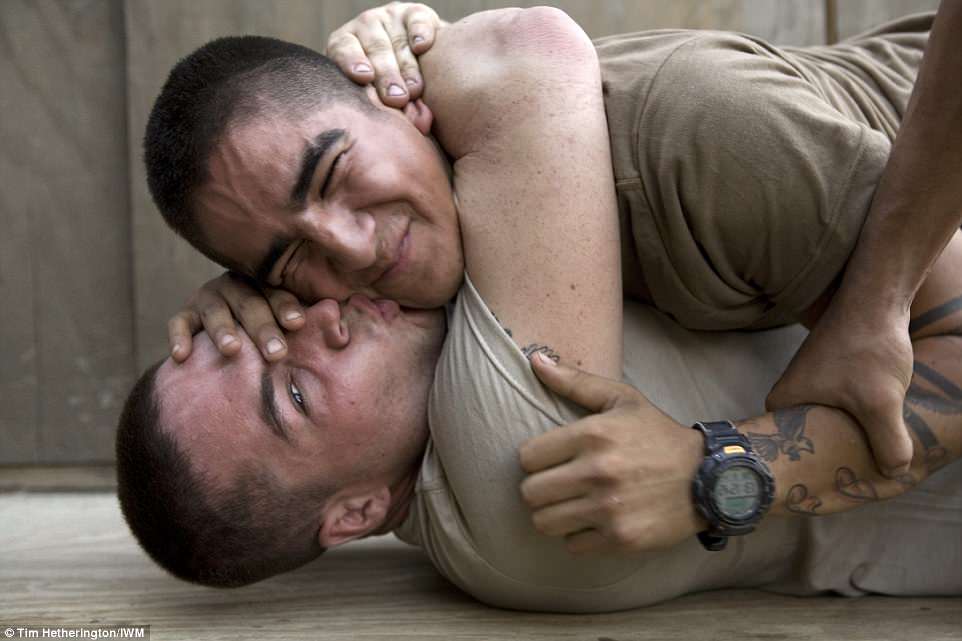 A soldier jokingly kisses his colleague during a play fight at the barracks of Second Platoon in Kunar Province, Afghanistan in June 2008. During the war on terror in that year, approximately 150 US soldiers would be killed in action while fighting insurgents in the sparsely populated mountain regions of Afghanistan 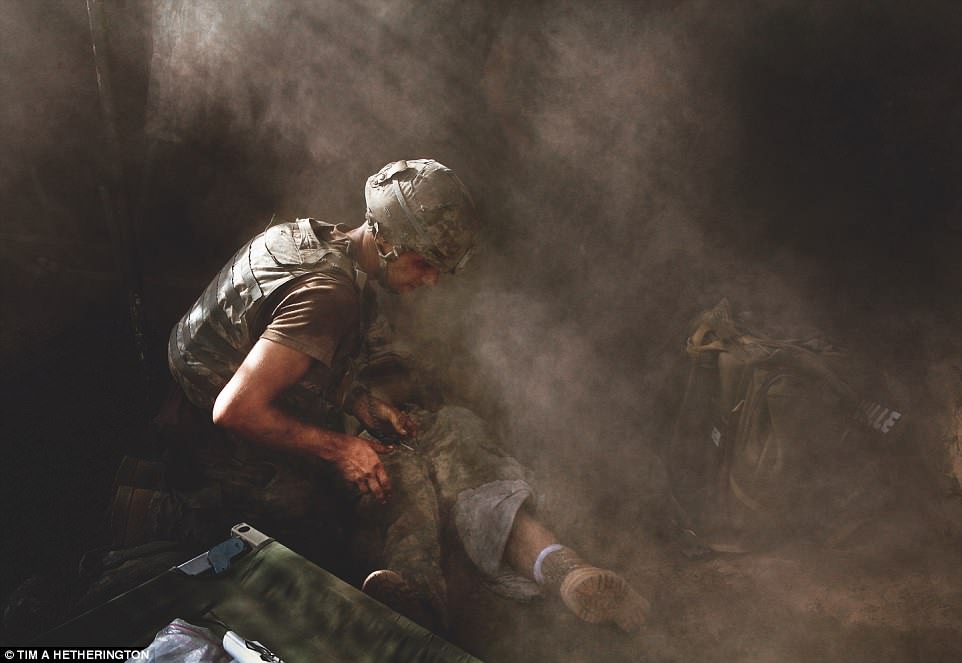 A medic treats specialist Gutierrez, injured during an attack by Taliban fighters on the Restrepo outpost in 2007. Forty-two American soldiers died at the infamous bunker before the United States military pulled out of the area in April 2010. Since Operation Enduring Freedom in Afghanistan began (in 2001 – and to the present day), there have been around 2,380 US,  and 455 UK military fatalities 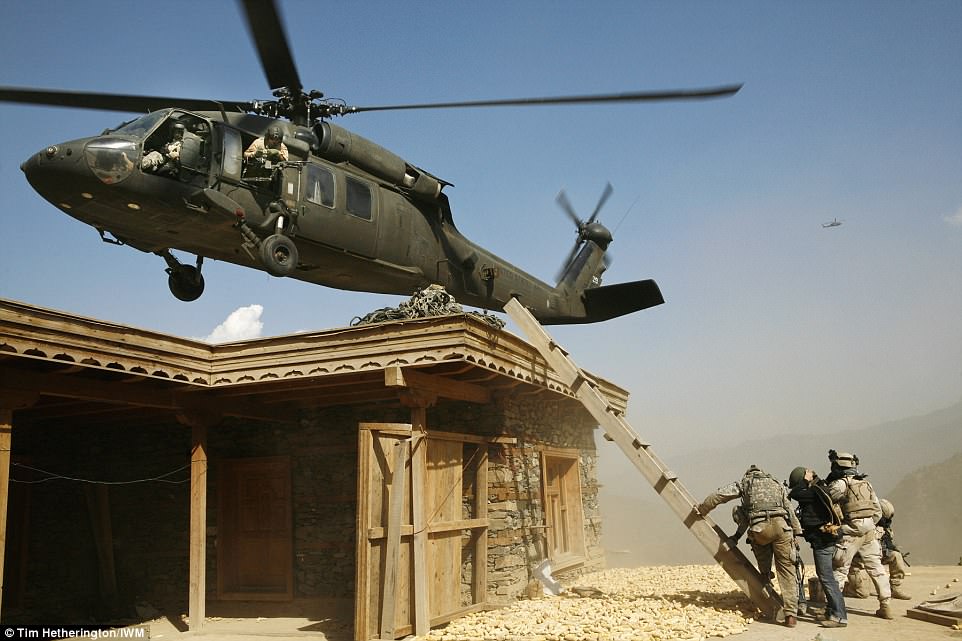 An army Black Hawk helicopter landing on the roof of a civilian house, north-eastern Afghanistan, to extract senior military personnel following a meeting – or ‘shura’ – with Afghan elders in 2007. The aim of such meetings was to make breakthroughs in co-operation, while also showing a respect for Afghan culture 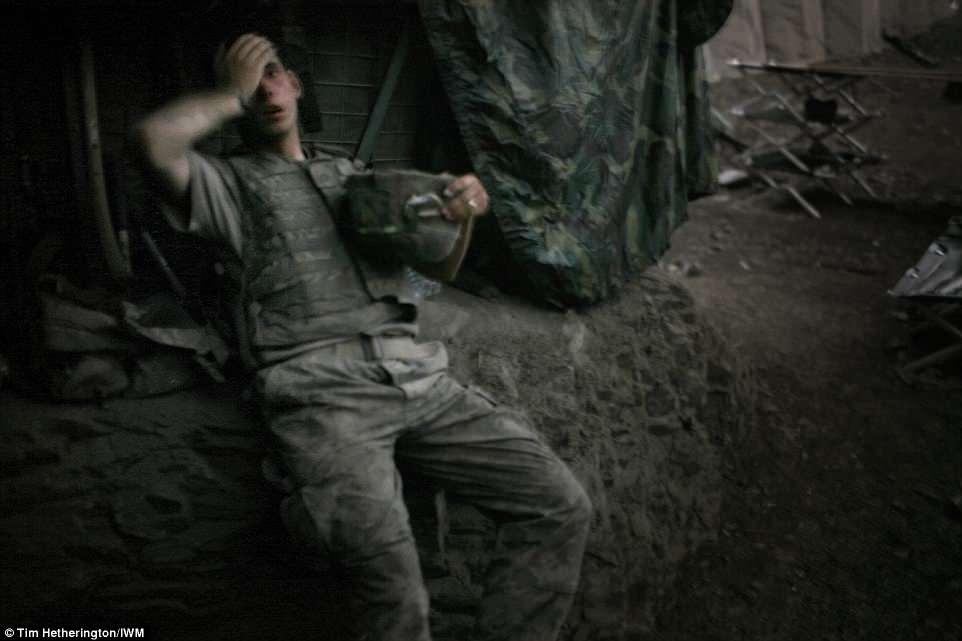 World Press Photo of the Year 2007, taken in the Korengal Valley in 2008 – showing a US solider resting in the Restrepo bunker. A jury chairman from the contest said it represented the ‘exhaustion of a man – and the exhaustion of a nation’. Just six miles long and half-a-mile wide, Korengal –  also known as ‘Death Valley’ – was the scene of some of the bloodiest fighting in the War on Terror campaign 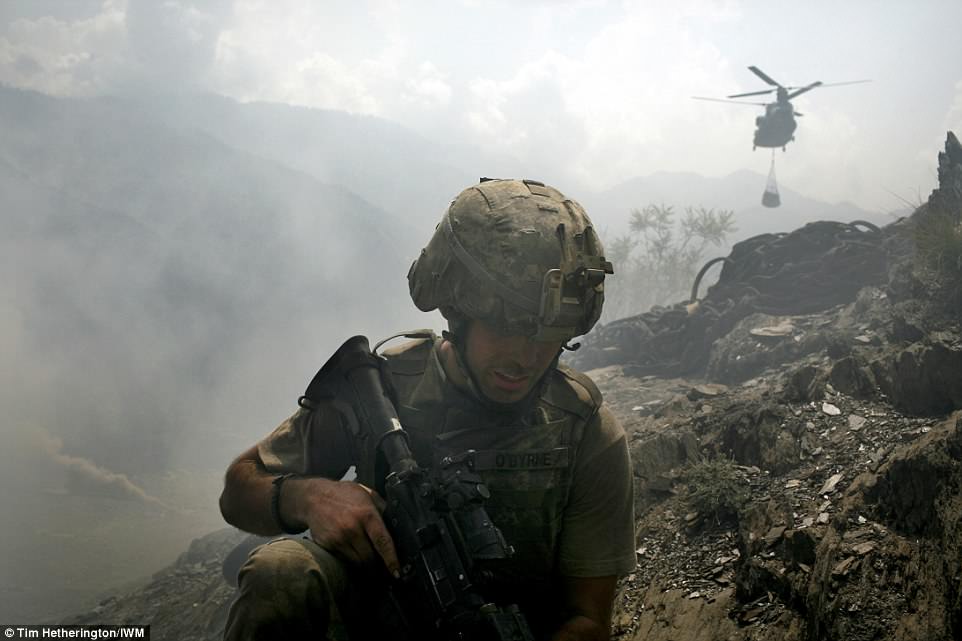 A US soldier is seen taking cover from the dust whipped up by a Chinook helicopter delivering supplies to Restrepo firebase. In addition to American troop deaths at the hand of the Taliban insurgents, scores more were wounded in helicopter crashes, machine-gun attacks and grenade blasts in the Korengal Valley 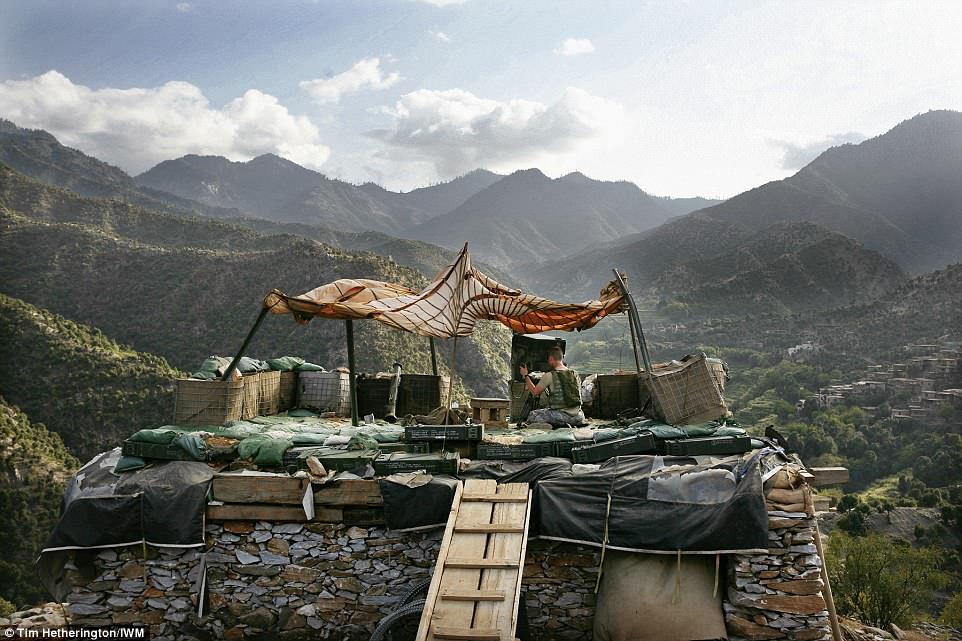 Conducting surveillance with a thermal imaging camera from the US main firebase in the Korengal Valley in 2007. Despite more than a decade of the Coalition forces presence in Afghanistan, the Taliban remain strong and are growing in number. Prime Minister Theresa May confirmed last May that 86 extra UK troops would go to the country after pressure from the US to increase support. This figure then rose to 150 in November 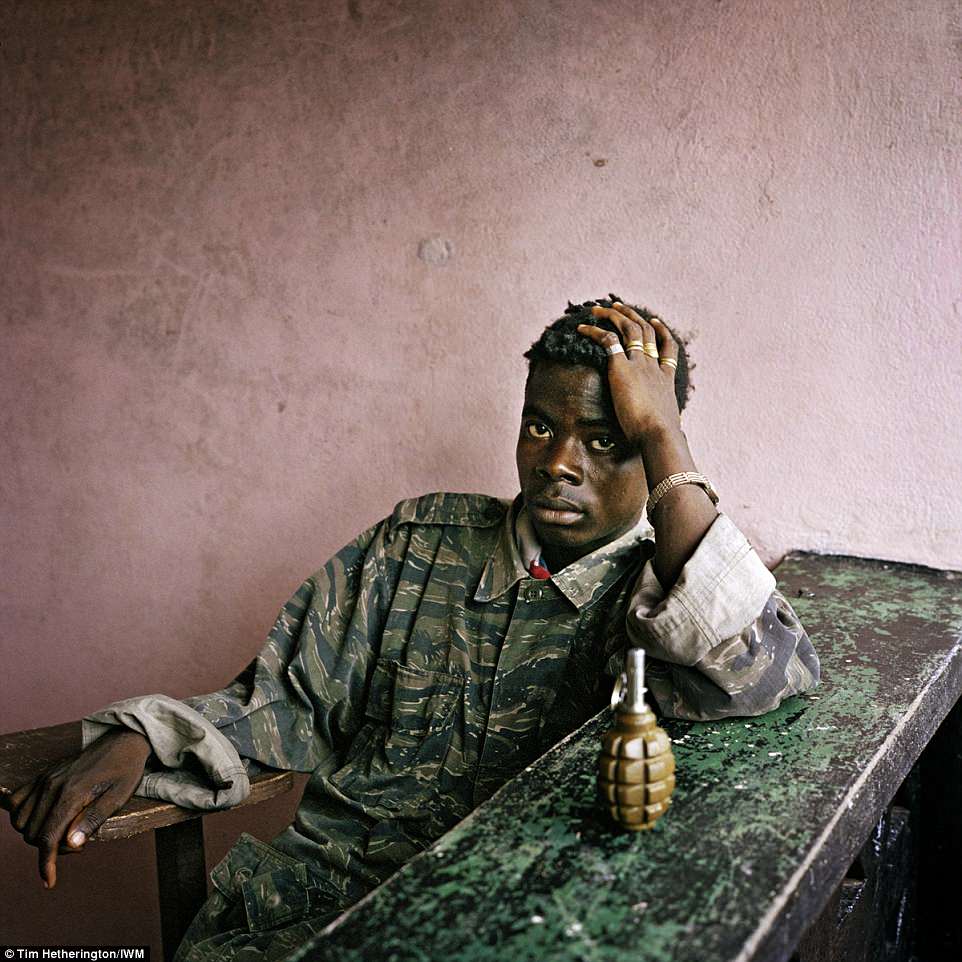 A Liberians United for Reconciliation and Democracy (LURD) rebel fighter with a hand grenade in Tubmanburg, Liberia, 2003. The Second Liberian Civil War raged for four years, from 1999 to 2003, and involved child soldiers on all sides along with extensive civilian casualties. The conflict spread into neighbouring countries Guinea and Sierra Leone 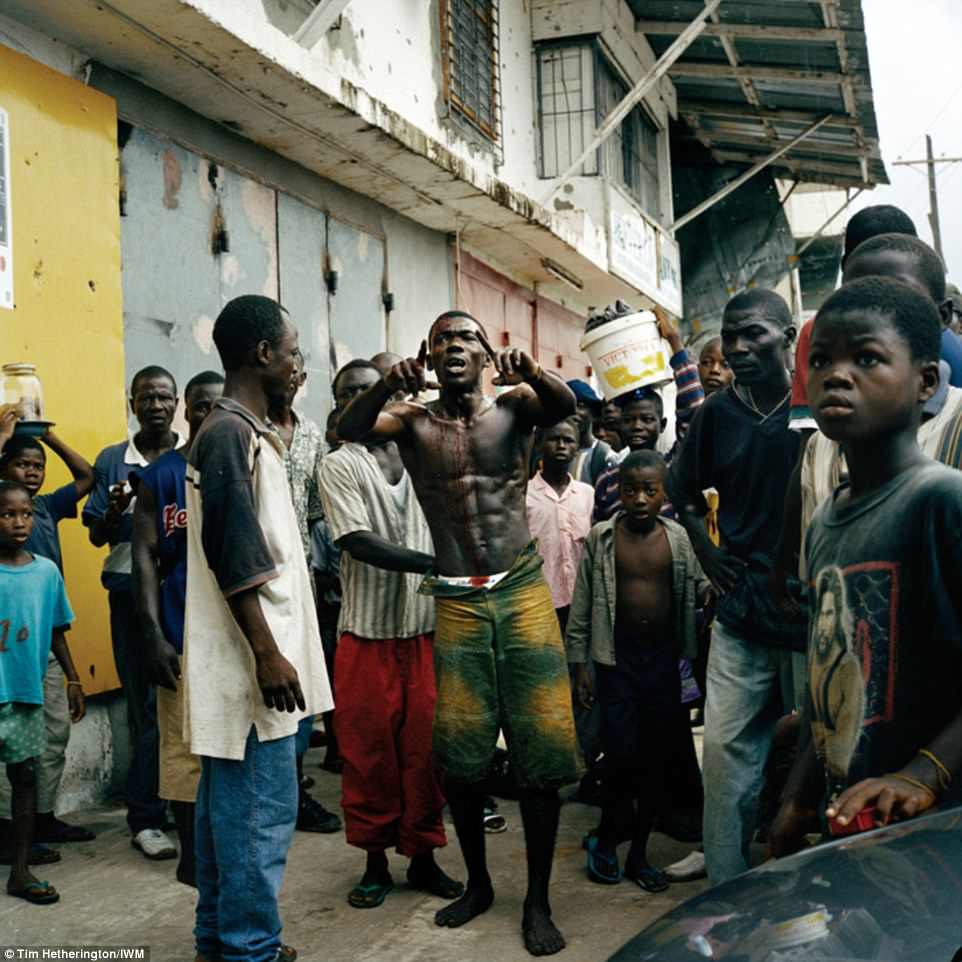 A thief is caught in a marketplace in Bushrod Island, Monrovia, in 2003. He was beaten before being handed over to UN forces. As a result of the civil conflict, the nation’s president, Charles Taylor, was forced to resign and fled. A West African peacekeeping force was deployed to the capital in August and was replaced by a UN force in September 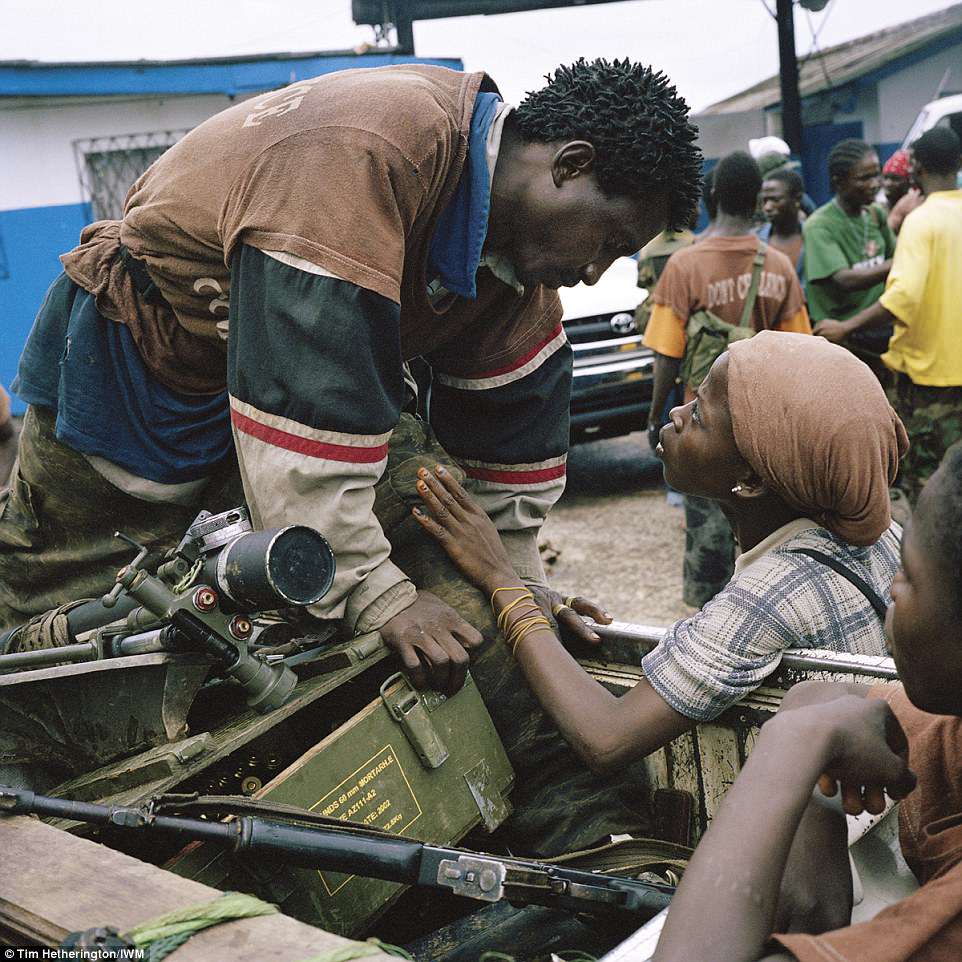 A member of the anti-aircraft brigade talks to his girlfriend during heavy fighting in Monrovia, Liberia in 2003. Although UN deployments increased security within Monrovia, other parts of Liberia continued to experience clashes between rebels and pro-Taylor fighters for the rest of the year 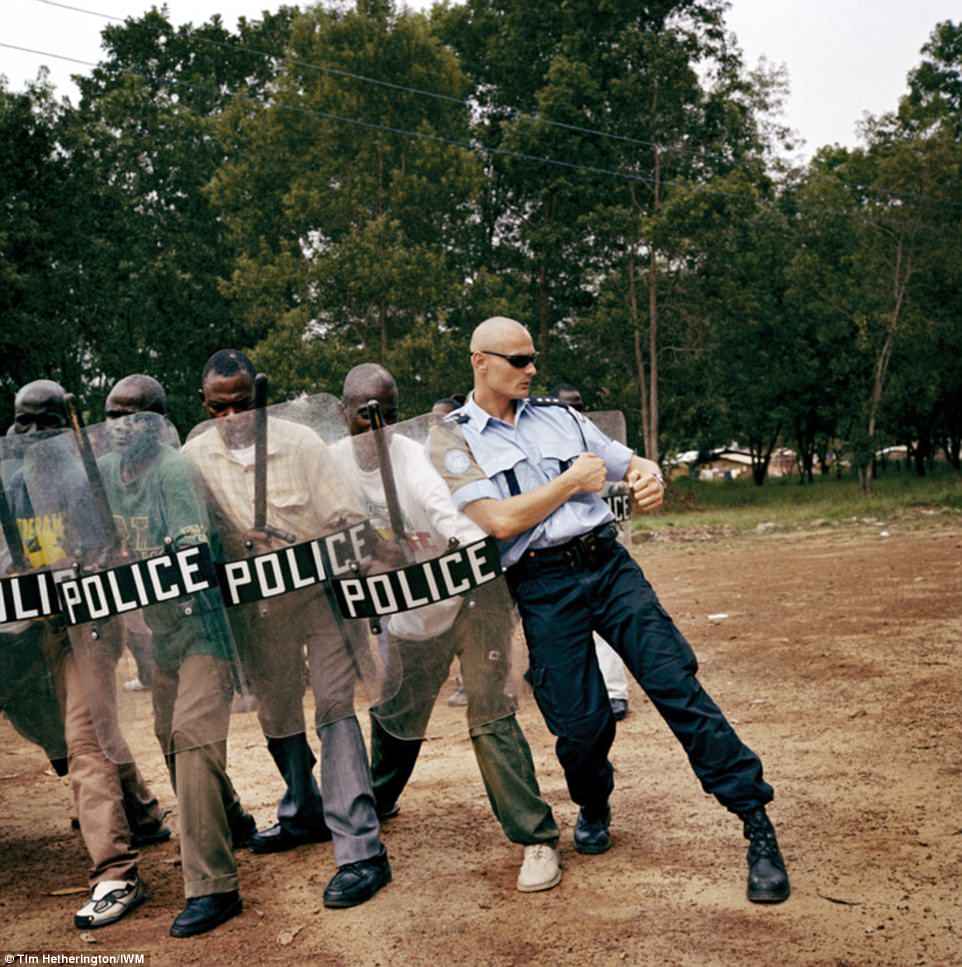 Matren Ondraka from the Czech Republic trains new recruits of the LNP (Liberian National Police) in riot control as part of the United Nations Civilian Police restructuring plan in Monrovia, Liberia in May 2004. By mid-2003, fighting had escalated when Liberian rebels took the offensive. The greatest onslaught occurred in the capital city of Monrovia, where more than 1,000 civilians were killed in a two-month campaign 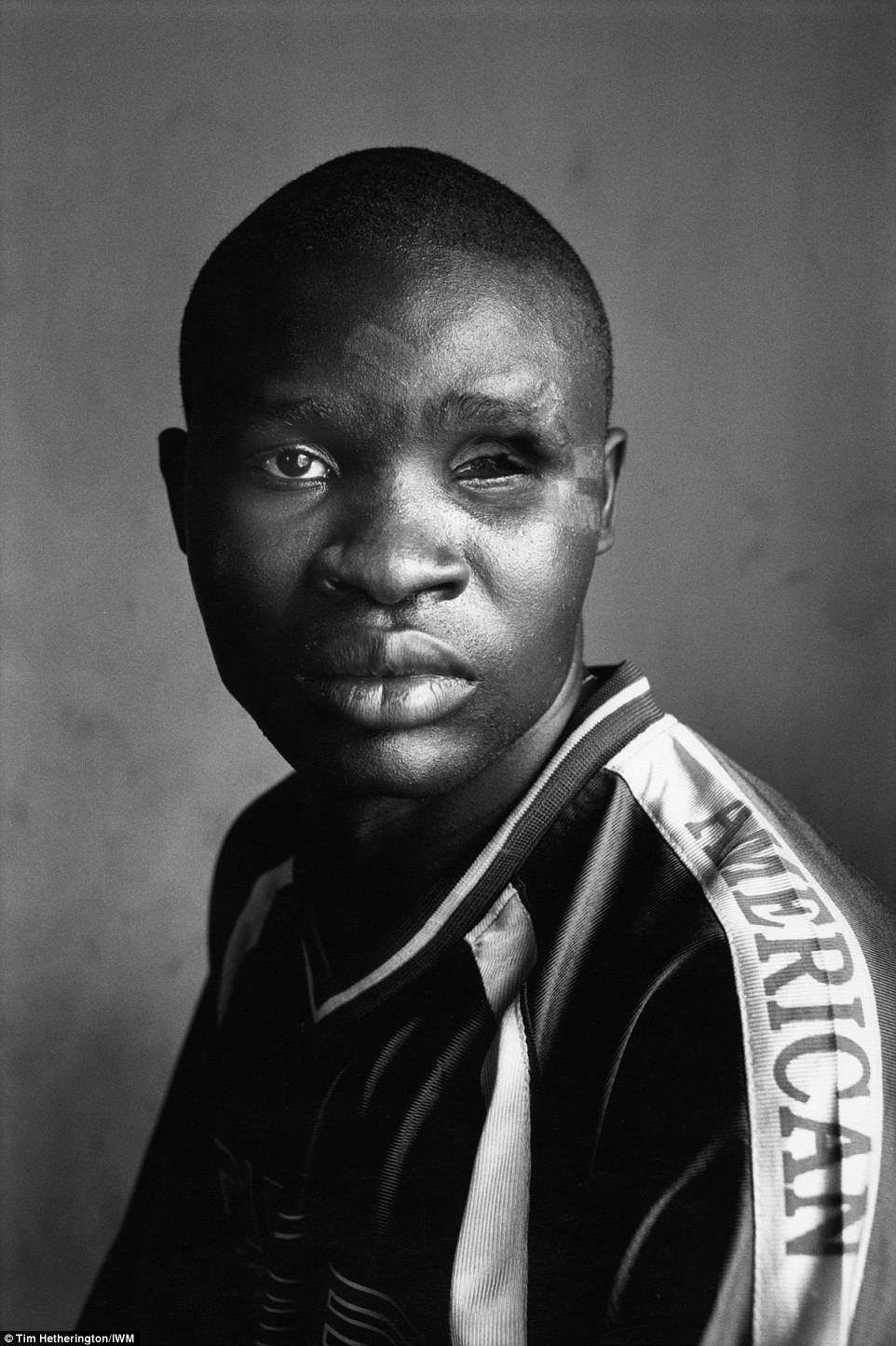 A warblind patient awaiting surgery in Freetown, Sierra Leone in October 2000 . A large number of people lost their eyes during the civil war, either through gunshot, shrapnel or rebel torture. Charles Taylor, once one of Africa’s most feared warlords, faced charges of rape, murder, mutilation and recruitment of child soldiers at a UN-backed Special Court for Sierra Leone, set up to try those most responsible for the 1991-2002 civil war in Sierra Leone. He was found guilty in 2012 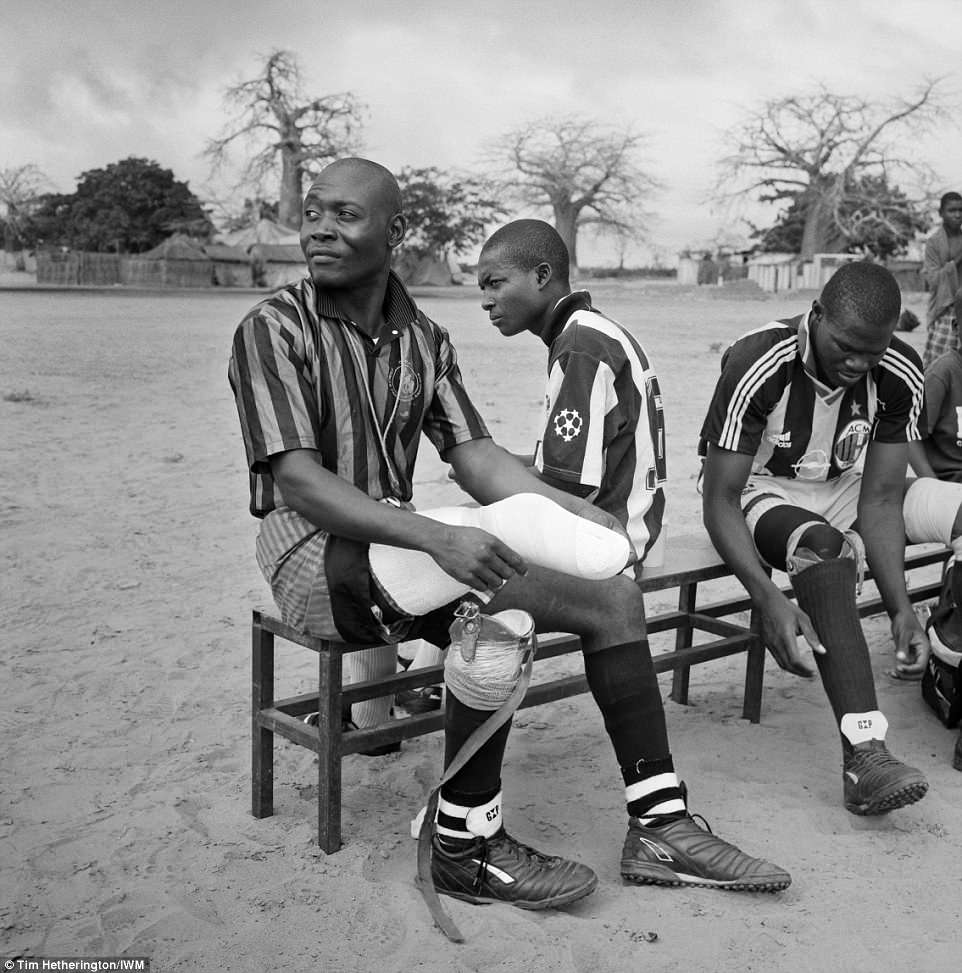 A veteran of the Angolan civil war with a prosthetic leg, and his teammates, prepare for a football match near Luanda, Angola in 2002. The conflict in the region lasted for 27 years. It had begun immediately after Angola became independent from Portugal in 1975 – and was a power struggle between two liberation movements. The war led to  around 100,000 amputees, of which around 8,000 were children aged under 15 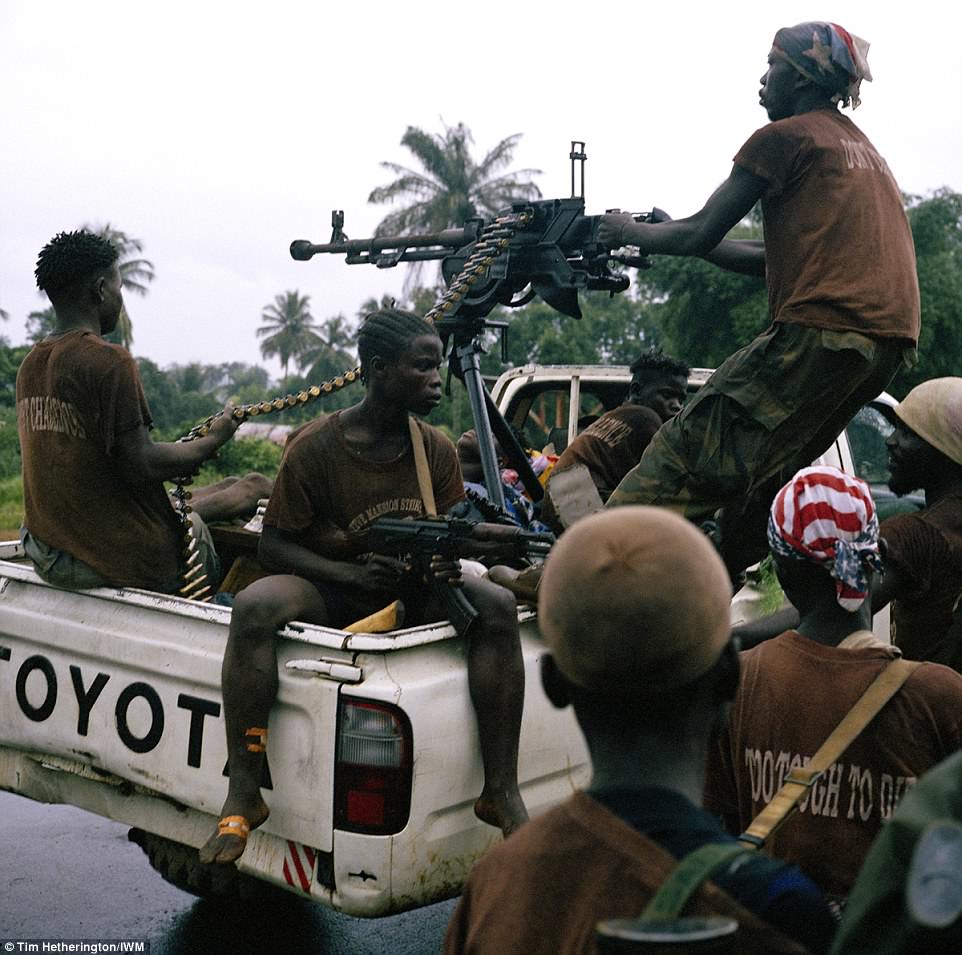 LURD rebel forces using a pickup truck mounted with an anti-aircraft gun during their advance on the Liberian capital city Monrovia in 2003. Thousands of people were displaced when rebels clashed with the armed forces of Liberia during the ensuing two-month siege 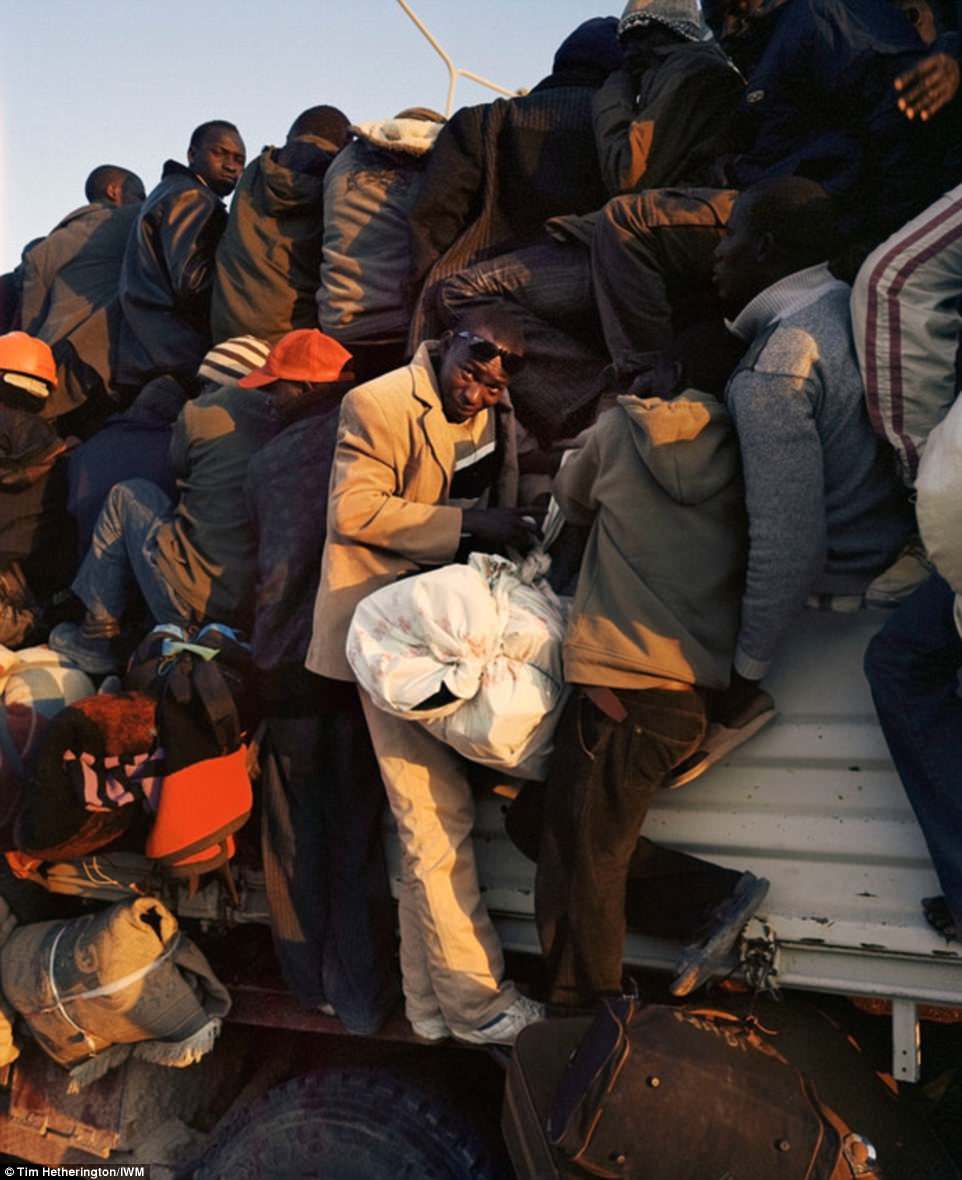 African men from Niger who had been working in Misrata, Libya, attempt to flee the besieged city via the port in April 2011. Earlier that year saw an uprising that finally toppled the four-decade rule of despot Muammar Gaddafi. In February 2011, anti-Libyan government militias took control of Misrata after evicting forces loyal to Gaddafi 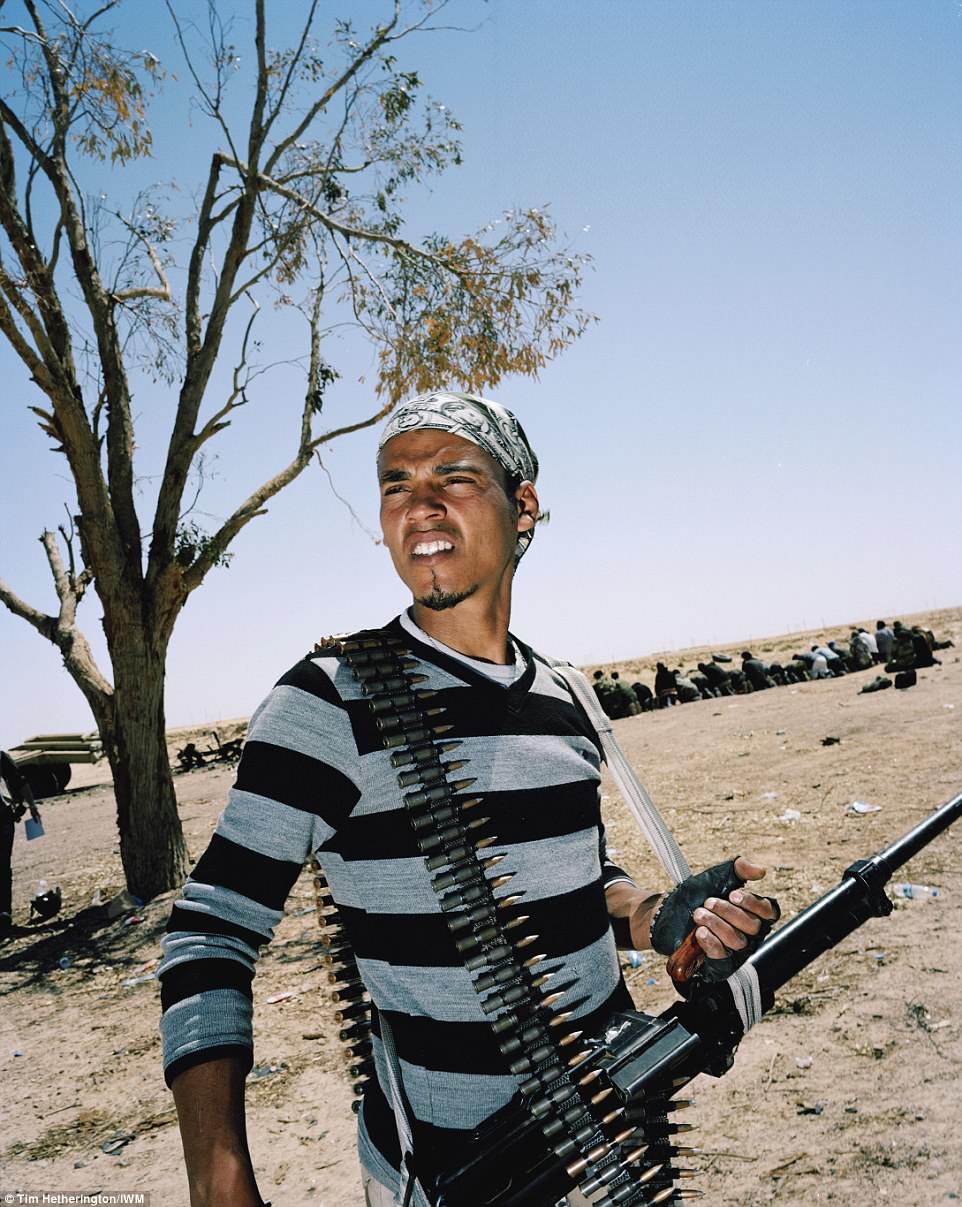 Portrait of an anti-Gaddafi fighter in the desert of Eastern Libya in 2011. Gaddafi was captured and killed by rebel forces in October that year. It is not known how many died during the conflict but the figure could be as high as 20,000 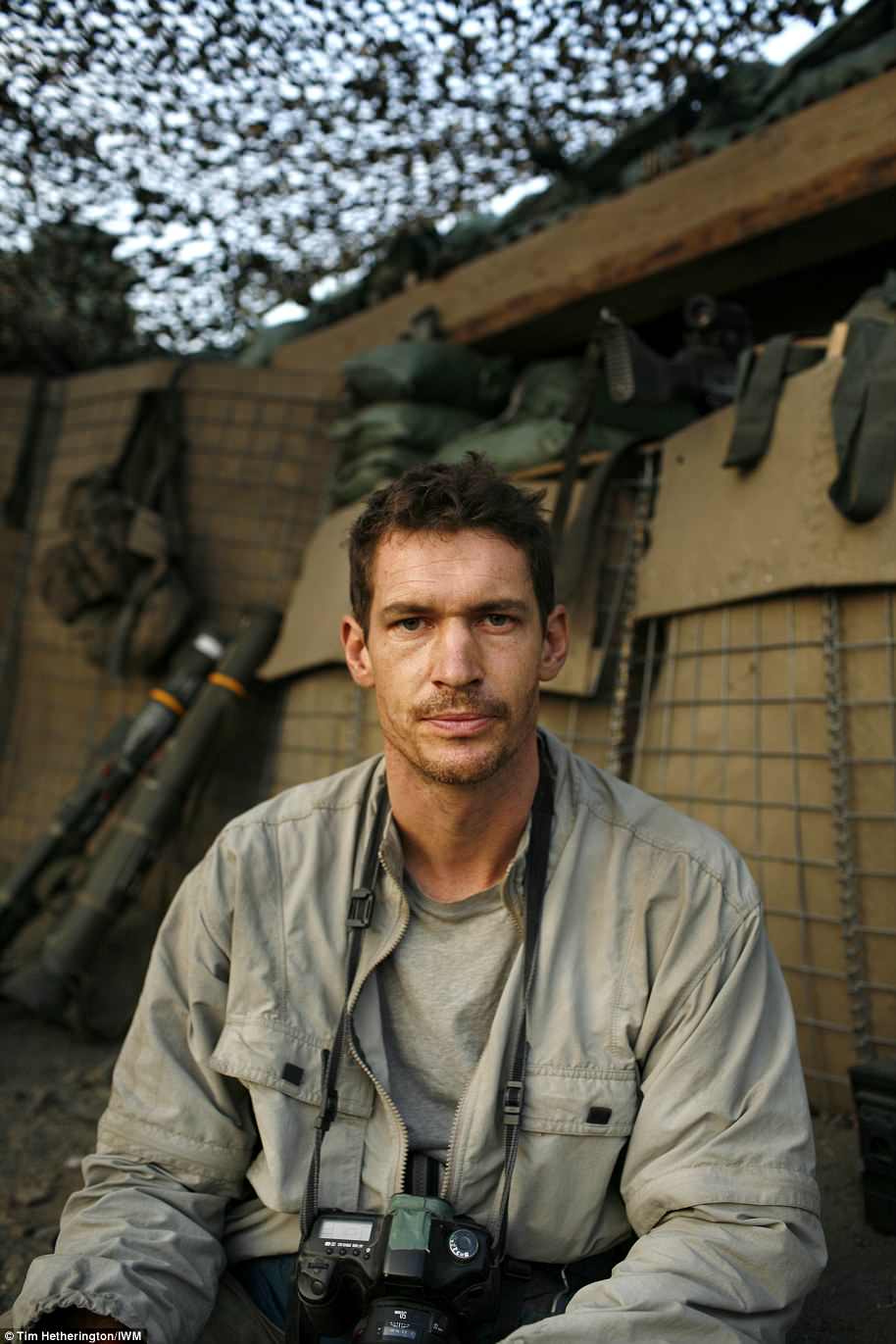 Portrait of Tim Hetherington while embedded with US Airborne troops in the Korengal Valley, Afghanistan, 2007. The 41-year-old Briton died in a mortar attack in Libya in 2011
- Advertisement -
- Advertisement -