The mother of a seven-year-old girl who was raped with a water hose and left fighting for her life in India has called for the attacker to be hanged.

The young girl was reportedly lured to a landfill site in New Delhi by a 21-year-old man before he raped her with the large metal pipe.

After the sickening attack, he handed her 10 rupees and a piece of chocolate for her silence before leaving her bleeding from her genitals with a towel around her waist, reports CNN.

Her 26-year-old mother told CNN: ‘He should be hanged. Life imprisonment is too small a punishment.

After she picked her frightened daughter up the girl identified the rapist in a crowd nearby, and he was arrested by local police.

The alleged victim was then rushed to hospital where she needed hours of urgent surgery.

Swati Maliwal, chairwoman of the Delhi Commission for Women, took to Twitter to describe how the young girl had been left in indescribable pain.

‘Just met with 7 year old rape survivor who was brutally raped in Seemapuri yesterday by a 22 year old man.

‘He took her to a park, inserted water pipe inside her private part & then raped her. Girl is v critical, has bled incessantly & was operated upon. Mom single parent, v poor! 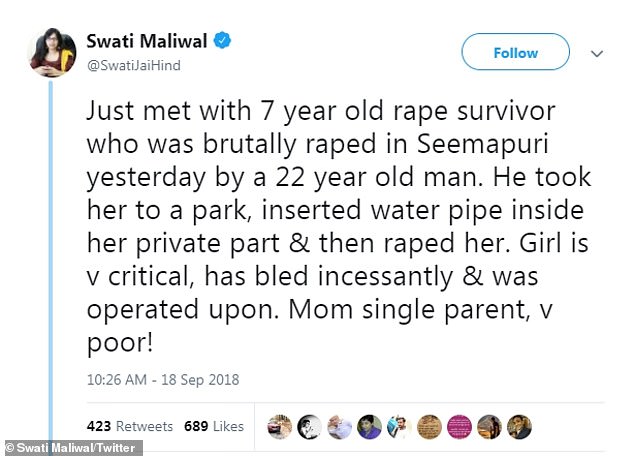 ‘Cannot describe the pain the little girl was experiencing. Already malnourished, she has a long struggle ahead.

‘We are going to support her in her legal fight to ensure death penalty to her culprits. Will file compensation application & shall make all efforts to rehabilitate her.’

Local media reports that the 21-year-old alleged attacker has confessed to carrying out the crime, and he has been denounced by his own family.

His pregnant wife told India Express: ‘We used to argue over his alcoholism, but I can’t believe he would do this. Police should bring justice to the girl.’

Rape victim, 12, dies from her injuries after she and a friend were abducted and assaulted

A 12-year-old girl has died after she and a friend of the same age were abducted and brutally raped by two males in western India.

The two girls had been playing at a temple near their homes in Pune, Maharashtra state, when a 17-year-old boy and a man, aged 22, lured them away from the grounds with chocolates.

The alleged attackers reportedly took the 12-year-old girls to a ‘desolate’ area and took turns in raping them.

The horrific incident took place in Hinjewadi, a suburb to Pune, on Sunday afternoon.

After the brutal sexual assaults the 17-year-old and the 22-year-old told the girls they would kill their families if they told anyone what had happened.

‘They raped the girls and threatened them with dire consequences if they revealed the incident to their parents or any other person,’ said an officer of the Hinjewadi police told Times of India.

‘One of the traumatized girls fainted after reaching home. Her parents, who were not aware of the incident, took her to the private hospital.

‘Another girl then gathered courage and narrated her ordeal to her parents.’

The condition of the 12-year-old girl in hospital deteriorated, and she slipped into a coma.

She died on Wednesday as a result of the injuries inflicted on her during the sexual assault.

The other girl was able to identify the two attackers, and the men have been arrested by police.