An Indian TV show has been pulled off air after outraged viewers claimed it glorified child marriage by showing a 10-year-old boy wed to woman aged 19.

The show was criticized over its portrayal of child marriage, which though illegal remains widespread in many parts of India, and accusations that the show sexualised children.

‘The young couple talk about going on a honeymoon. There’s talk of suhaag raat [consummation of marriage].

A petition questioning the influence of the show on viewers prompted the Ministry of Information and Broadcasting to call for a review of the soap by an independent broadcasting authority.

‘There were numerous complaints about the content of the show and we sent it for review,’ said an official in the ministry, requesting anonymity.

‘The show was pushed to a late night slot with a disclaimer first and has now been taken off air.’ 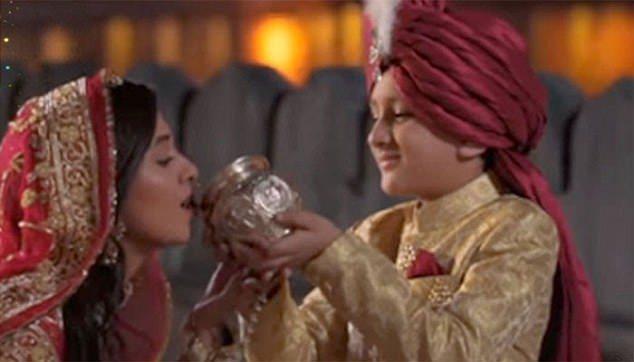 The show was criticized over its portrayal of child marriage, which though illegal remains widespread in many parts of India, and accusations that the show sexualised children

The Change.org petition urging information and broadcasting minister Smriti Irani to ban the show had garnered nearly 50,000 signatures in 48 hours.

The petitioner Mansi Jain questioned the influence the soap would have on viewers and said it showed the child perform marriage rituals such as putting vermillion on the older actor playing his wife.

‘This soap is encouraging, glorifying and promoting child marriages and will negatively affect the entire society,’ Asha Bajpai, professor of law at the Tata Institute of Social Sciences told the Thomson Reuters Foundation.

‘And what about the 10-year-old boy playing the husband’s role? What kind of values are we inculcating in him at this young, impressionable age?’

The legal age for marriage in India is 18 for women and 21 for men. But child marriage, though illegal, remains widespread in parts of the country.

Along with Niger, Guinea, South Sudan, Chad and Burkina Faso, India has one the world’s highest rates of child marriage, despite moves to toughen penalties against the crime.

The Child Marriage Prohibition Act imposes a $1,500 fine and two years in prison for parents caught marrying off their underage children.

India has been cracking down on child marriages and campaigners said such shows could dent progress.