The British woman sentenced to three years in a notorious Egyptian jail will have to bribe inmates to get a bed and will only be allowed out of her cell twice a week, according to a former inmate.

Pete Farmer, 45, was locked up in the cockroach-infested Al Qanater prison for two years before his release in November.

Tourist Laura Plummer, 33, from Hull, was moved to the Cairo prison to begin her three-year jail term on Saturday after she was arrested for carrying 290 banned painkillers.

Pete, from Essex, said she will be forced to sleep on the floor in a crowded cell – or rent a bed from a ‘lifer’ for up to 400 illegal smuggled cigarettes a month.

He said she’ll only be allowed out of her cell for an hour or two every three days, and will have to wear a long white dress with an Islamic head covering.

She’ll have to buy the protection of the guards or other prisoners to ensure her safety, and won’t be allowed any visitors for the first 15 days, he claims.

Speaking from Essex, where he is staying with family, Pete said: ‘The worst bit of her entire time, she might well have just endured during the transfer there. 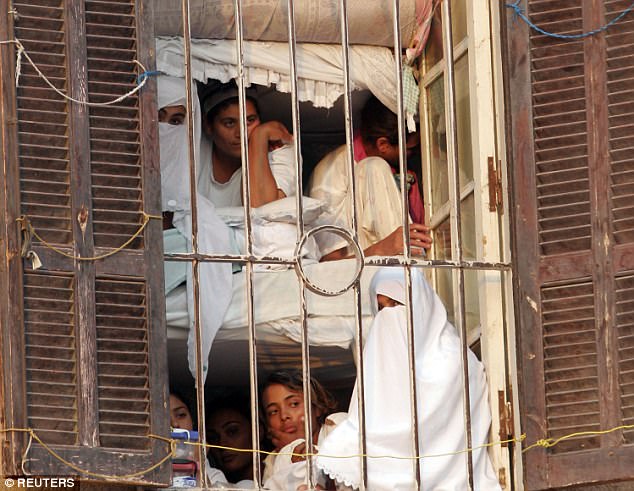 ‘It will have been eight to ten hours in the back of a baking hot lorry with no stops.

‘There will have been 30 others stuffed in, with all the heat and all the sweat and urine, trapped in this metal box.

‘If someone throws up it just runs all over the floor for the rest of the journey.

READ  Raped and tortured in a Dubai prison

He said she will spend her first ten days in an ‘entry section’ where prisoners are kept to prevent weapons being smuggled in, before she is assigned a cell.

He added: ‘She’ll have to rent a bunk bed because there are so many women, there just aren’t enough beds to go round.

‘It will be 200 to 400 cigarettes a month. The lifers control the beds. It’s their way to get an income. ‘It will be that or sleep on the floor.

‘As a foreigner, she won’t be allowed to work because she hasn’t got a work visa, so she will have to rely on outside donations. ‘Any money her family brings in she can put on her account to buy things from the canteen.

‘She will be able to buy water, little bottles of coke, biscuits, things like that, but the prison food is terrible. It’s rice, rice and rice. ‘Cigarettes are the real currency.

‘The prison is so corrupt and certain prisoners somehow get enormous amounts of cigarettes in, and the guards are paid a cut to turn a blind eye while they sell them or trade them. ‘Someone in there will have a freezer and they will rent out a space for around three Egyptian pounds a day.

‘She will be given minimal clothing – a long white dress and head covering too. ‘She can pay to have someone to watch the door while she’s in the bathroom, or whenever, and even the guards to not give her so much of a hard time.’

He said the British Embassy visit once every three months and her cell will be subject to regular unannounced searches. ‘They just destroy the place and then throw everything into a pile,’ he said.

He claims no letters or post are permitted to be delivered in or out of the prison, but inmates can deliver post internally, via the prison pastor. He said disease is rife and added: ‘Scabbies is very common, as are bed bugs and lice.

‘I really feel for her. It really is impossible to put into words how horrific the conditions are. ‘Nobody deserves to endure that. It’s not prison – it’s hell.’ He said Laura’s family plan to try and visit her with a solicitor this week.

Pete, a DJ, moved out to Egypt in 2004 to work as a club DJ, and also ran a radio station and record label.

He was on a night off in November 2015 when he claims a drawstring bag – identical to one he and thousands of tourists had out there – was placed at his feet.

Mistaking it for his own, he picked it up and headed home, but was awoken by the police knocking on his door, he said.

They accused him of robbery and after checking the bag he realised his mistake and handed it back.

But police took him to the station, charged him with the crime, and after around three months he was found guilty and sentenced to two years in prison.

He said he has been supporting the family of Laura Plummer by telling them what she can expect, and offering advice.

‘I’ve told them she’ll have to toughen up and put her best front on,’ he said.

‘She will get flack from prisoners because she has been in the papers.’

Raped and tortured in a Dubai prison