According to a new study by BankMyCell of 38,000 people, iPhone retention is down 15% from 4Q18 to 2Q19 versus the following year, with 73% of respondents saying they will continue buying Apple products. That means the iPhone retention rate is at the lowest level since the smartphone trade-in website started tracking in 2011.

The study said 24.5% of users traded in their iPhones in 4Q18 (just around the time the iPhone XR, XS, and XS Max debuted), moved to a new smartphone brand (mostly Samsung, Huawei, and LG).

BankMyCell indicated that Samsung loyalty was one of the highest out of all smartphone brands. Only 7.7% of Galaxy S9 users made the transitioned to an iPhone, and 92.3% remained on the Android operating system. In comparison, a quarter of users traded in their iPhone X for an Android device. Apple has struggled over the last year to convince consumers that they need a +$1,000 iPhone X. In return, sales have been lackluster for iPhones over the $1,000 mark. Kantar Group published a report at the end of 2Q19, said iPhone devices accounted for 36% of phone sales in the US, down -2.4% from the same quarter YoY. Meanwhile, Android sales were up 2.5% and had 61% of all sales. 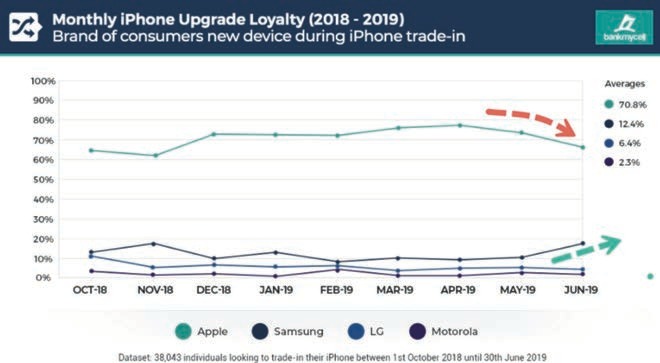 This comes at a time when global smartphone shipments are collapsing worldwide, Gartner global research stated, estimating that shipments will decrease by 68 million shipments this year. However, Macalope of Macworld called BankMyCell’s study flawed and shouldn’t be trusted. “You can’t compare results for different demographics and declare them meaningful. You’re not controlling for anything…The only constant here is the gullibility (or culpability) of the technology press.

If BankMyCell were interested in meaningful results, it would have compared its own results over two years if it couldn’t get CIRP’s demographic breakdown. But it’s clearly not…If the methodology is crap, then you can’t trust the numbers.” Nevertheless, if BankMyCell’s survey is right about the iPhone retention rate in decline, it could mean that consumers are ditching overpriced iPhones for cheaper smartphone brands. The transition also suggests that Apple’s innovation machine has died. 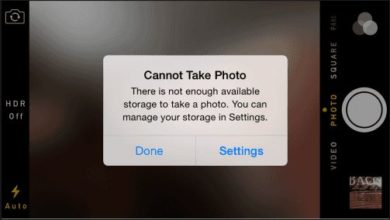