With its currency plummeting ahead of the reimposition of US sanctions, Iran has responded with dozens of arrests and claims of an enemy conspiracy, but also signs of a push to confront corruption.

The Iranian rial has lost almost two-thirds of its value since the start of the year, and 20 per cent in just two days since the weekend, hitting a record-low of 119,000 to the dollar.

Many lay the blame on the imminent reimposition of US sanctions on August 6 following US President Donald Trump‘s decision to pull out of the historic nuclear accord, with Iranians rushing to store their savings in dollars.

The central bank issued a statement on Monday that trod a familiar line, blaming ‘the enemies’ conspiracies’ for the rial’s sudden decline. 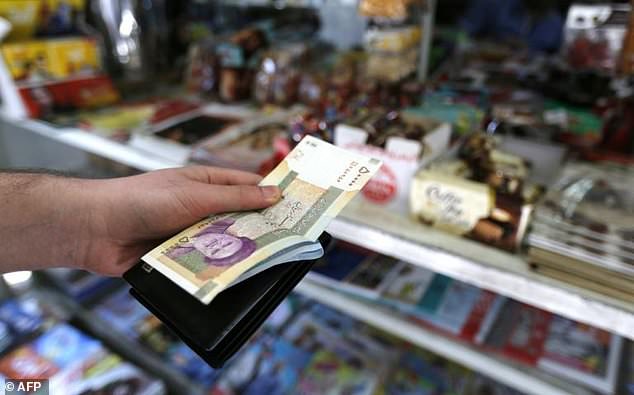 The US and its Gulf Arab allies are engaged in a ‘maximum pressure campaign’ against the Iranian government, and there have been rumours that the United Arab Emirates has been curbing the physical supply of dollars to Iran, helping drive up prices.

But others say outside pressure is only effective because Iran’s economy is so corrupt and poorly managed.

Belatedly, the authorities appear to be waking up to the crisis. This weekend, the judiciary announced 60 people had been arrested for fraud and trying to undermine the banking system, with more to come.

Spokesman Gholam Hossein Mohseni-Ejeie said several had direct ties to the government, allowing them, for example, to illegally import luxury cars, and could face the death penalty on Iran’s infamous charge of ‘corruption on Earth’.

The arrests follow mounting anger against profiteers who use political connections to access dollars at artificially low rates, and then use them to import goods on the cheap, or simply sell them on the black market for a huge profit.