DUBAI, United Arab Emirates (AP) – After a second suspected Israeli strike killing Iranian forces in Syria, the Islamic Republic has few ways to retaliate as its leaders wrestle with both unrest at home and the prospect of its nuclear deal collapsing abroad.

Though it has long made threats about Israel’s existence, Iran doesn’t have a modern air force to take on Israel. Launching ballistic missiles also remains a question mark, considering Israel’s anti-missile defense system, the near-certainty of massive Israeli retaliation and the risk of further alienating the West as President Donald Trump threatens to withdraw the United States from the atomic accord.

Meanwhile, Iran’s long-favored strategy of relying on allied militant groups and proxies faces limits as well. Hezbollah, now bloodied and battered from Syria’s long war, may not have the appetite for another conflict as the Shiite militant group tries to further integrate into local Lebanese politics. 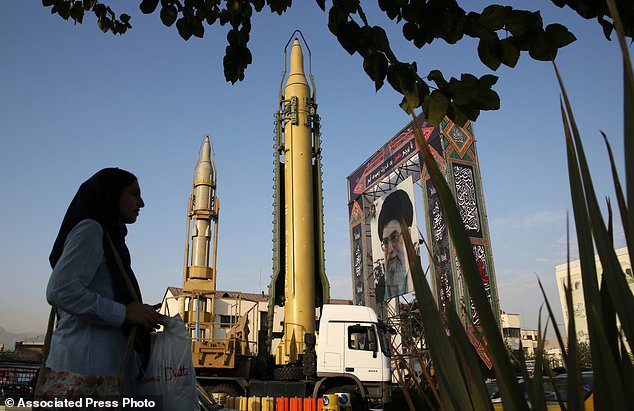 FILE – In this Sept. 24, 2017 file photo, a Ghadr-H missile, center, a solid-fuel surface-to-surface Sejjil missile and a portrait of the Supreme Leader Ayatollah Ali Khamenei are displayed at Baharestan Square in Tehran, Iran. Facing a second suspected Israeli strike killing Iranian forces in Syria, the Islamic Republic has few ways to retaliate as its officials wrestle both domestic unrest at home and the prospects of its nuclear deal collapsing abroad. (AP Photo/Vahid Salemi, File)

Here’s a look at what happened and the challenges confronting Iran as it weighs its response.

On Sunday, just before midnight, another attack struck Syrian government outposts further north, in Hama and Aleppo provinces. The Britain-based Syrian Observatory for Human Rights said the strikes, which targeted an arms depot containing surface-to-surface missiles belonging to Iranian militias in Hama province and a military base in Aleppo province, killed 26 pro-government forces, most of them Iranians.

Suspicion for both attacks immediately fell on Israel, which, in keeping with tradition, has neither confirmed nor denied carrying out the strikes. If Israeli jets carried out the latest assault, it would mean the country’s fighters are flying deeper and deeper into Syrian territory, as Hama is some 180 kilometers (110 miles) from Israel.

Iran’s air force, in particular, has suffered since the 1979 Islamic Revolution. The backbone of its air power remains pre-revolution American F-4s, F-5s and F-14s, with a mix of other Soviet, French and aging aircraft. That fleet is outgunned by the modern U.S.-supplied fighter jets flown by Israel and the Gulf Arab states.

To counter that, Iran has put much of its money toward developing a ballistic missile force it says provides a defensive deterrent to a direct air attack. Iran’s Revolutionary Guard, a hard-line paramilitary force answerable only to Khamenei, controls those ballistic missiles, which can reach Israel.

There is recent precedent for Iran launching ballistic missiles to avenge attacks. Last June, six Iranian Zolfaghar missiles targeted Islamic State group positions in Syria in revenge for an IS-claimed attack on the Iranian parliament and the mausoleum of Ruhollah Khomeini, the Islamic Republic’s founder. However, Israeli media later reported only one made it to its target, something denied by the Guard.

Israel, in cooperation with the U.S., also has developed a multi-layer system of missile defense that could protect it against incoming Iranian fire. While no missile defense is perfect, Israel could defend itself. Israeli Prime Minister Benjamin Netanyahu, long a hawk on Iran, also likely wouldn’t hesitate to launch a massive retaliatory strike.

NUCLEAR DEAL IN THE BALANCE

A missile attack on Israel would draw an immediate response from the West, in particular the U.S., which long has acted as the guarantor of Israel’s safety. Trump has pledged “we have no better friends anywhere” than Israel and is moving the U.S. Embassy to Jerusalem, a move that has angered Palestinians, who claim east Jerusalem as the capital of a future state, and their Arab backers.

Any military action would further isolate Iran as Trump faces a self-imposed May 12 deadline to decide what to do about the 2015 nuclear deal with world powers. That deal allowed Iran to sell crude oil on the international market and regain access to the world’s banks. Losing it could mean further economic problems for Iran, which has already seen its currency, the rial, crater against the U.S. dollar.

While average Iranians haven’t experienced any direct benefit from the nuclear deal, they have felt the currency crisis. Iranian government officials recognize that anger, coupled with still-smoldering resentments after nationwide protests swept the country in December and January, could further challenge their rule. That could grow with a fumbled direct attack on Israel.

Iran could fall back on its regional militant allies or proxies to launch an attack, a strategy it has used with great success after its ruinous 1980s war with Iraq. After the 2003 U.S.-led invasion that toppled Saddam Hussein, the U.S. blamed Iran for training Iraqi militants to build so-called explosively formed projectiles, which penetrated armored vehicles to maim and kill soldiers. Tehran denied doing this. Western nations and U.N. experts also say Iran has supplied the Shiite rebels now holding Yemen’s capital with weapons, from small arms to ballistic missiles, something Tehran also denies.

Iran’s greatest proxy achievement, however, is Hezbollah, the Lebanese militant group and political organization that pushed occupying Israeli forces out of Lebanon in 2000. Since then, Hezbollah has remained an adversary of Israel and fought one war against it in 2006. Southern Lebanon’s rolling hills bordering Israel remain Hezbollah’s stronghold.

Iran could retaliate through Hezbollah, but the group has been battered in the Syrian war. Supporting embattled Syrian President Bashar Assad has seen hundreds of its fighters killed and wounded.

Hezbollah also wants to further integrate into local Lebanese politics as the nation votes on Sunday for a new parliament for the first time in nine years. Launching a new war could endanger its political support base, including possibly among its Shiite constituency, which is wary of another ruinous war with Israel.

For now, Iran continues to threaten retaliation. If none comes, Israel may feel emboldened to launch strikes even deeper into Syria to clear out major Iranian bases before that country’s war ends. But continuing strikes risk further escalation on all sides, with Hezbollah still heavily armed just across the Israeli border. How Russia and the U.S. would respond to any escalation remains a question as well.