Iran may block oil tankers from using the Strait of Hormuz in response to possible US sanctions over the country’s nuclear programme.

US President Donald Trump unilaterally pulled out of a 2015 deal signed by President Obama. 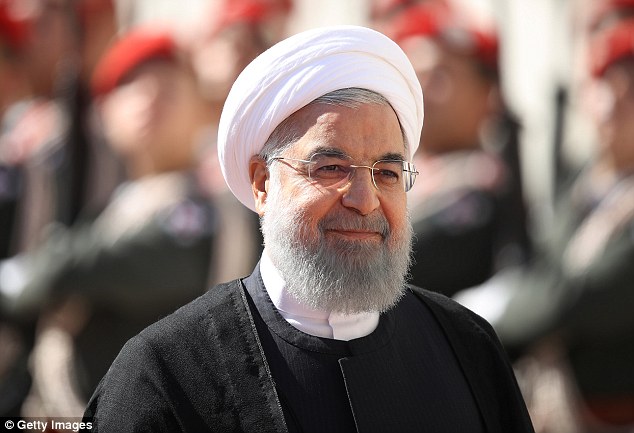 President Hassan Rouhani, pictured, made the threat in response to a plan by US President Donald Trump to impose new sanctions on Iran after he pulled out of the 2015 nuclear deal

Trump has threatened to impose sanctions on Iran. In response, Iranian president Hassan Rouhani said Tehran could block oil tankers using the narrow Strait of Hormuz – cutting off supplies from the Gulf.

Iran’s supreme leader Ayatollah Ali Khamenei backed his president and said: ‘If Iran’s oil is not exported, no regional country’s oil will be exported.

Rouhani’s apparent threat earlier this month to disrupt oil shipments from neighbouring countries came in reaction to looming US sanctions and efforts by Washington to force all countries to stop buying Iranian oil.

Iranian officials have in the past threatened to block the Strait of Hormuz, a major oil shipping route, in retaliation for any hostile US action.

Khamenei used a speech to foreign ministry officials to reject any renewed talks with the United States after President Donald Trump’s decision to withdraw from a 2015 international deal over Iran’s nuclear programme.

Khamenei added: ‘The word and even the signature of the Americans cannot be relied upon, so negotiations with America are of no avail.

He claimed it would be an ‘obvious mistake’ to negotiate with the United States as Washington was unreliable.