- Advertisement -
Shahad al-Jaber, 32, gives a kiss to her pet cheetah in Kuwait (MEE/Sebastian Castelier)
In the basement of a building in Kuwait city, two 80cm-tall African cheetahs sluggishly play with a ball next to a table. Shahad al-Jaber, a 32-year-old Kuwaiti, smiles proudly. “They are my babies. I would prefer them to my children if I had any, I’m sure.” 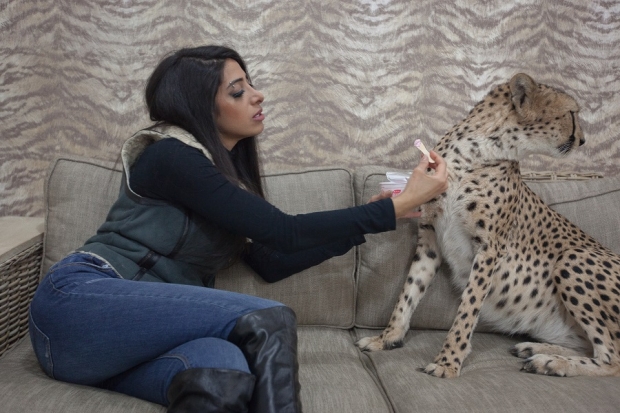 Followed by more than 15,000 fans on Instagram, Jaber bought both Mark and Shahad through an illicit network that smuggled them from Africa in April 2013 and February 2014, respectively, for a little more than $3000 each. While proudly showing off her cheetahs on Instagram, she claims she spends an average of $350 a month to feed and care for them.

‘They are my babies. I would prefer them to my children if I had any, I’m sure’

“I had cats and dogs before but I wanted something taller and bigger. At first I wanted a tiger. It is a dream I’ve had since I was six years old. But it is easier to have cheetahs. Watching TV on your sofa with your tiger is harder than it is with a cheetah,” Jaber says, explaining that tigers are bigger, heavier and more difficult to tame than cheetahs.

The single woman who lives alone with her “pet” cheetahs admits that it has been challenging to meet a man who would be comfortable with the wild animals roaming around the house, sharing the sofa and watching TV with them. She keeps her companions in a cage most of the time, but she sets them loose everyday for a while. 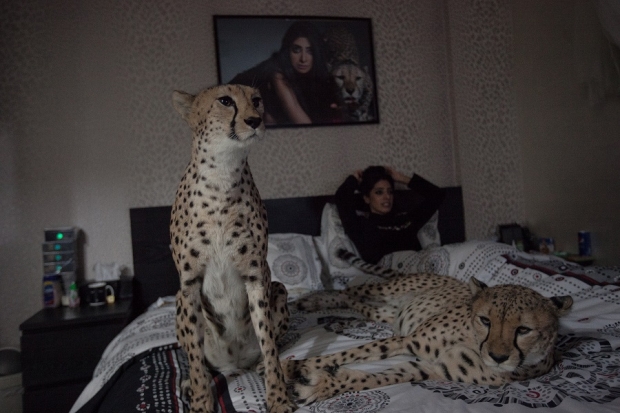 Shahad al-Jaber, 32, lying down on bed next to her two cheetahs (MEE/Sebastian Castelier)

“They are like cats you know, that is it,” she says, adding that she usually feeds them chicken.

At the top of a building in the district of Salmiya, a wealthy neighbourhood in the centre of Kuwait city, psychologist Adnan al-Shatti ends a consultation. Shatti intimately knows the fears, phobias and eccentric hobbies of his fellow countrymen: “A lot of people here like challenges, and they do not want a classic pet, but an extraordinary animal that resists them,” Shatti says. “This it is also about looking different from ordinary people. ‘If I can deal with such an animal, it means that I’m superior’,” he adds. 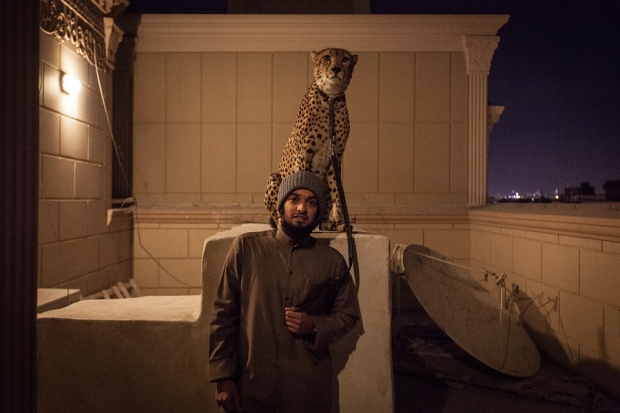 “In Kuwait, there is also a culture of non-regulation. In the conscience, there is no barrier. Everything is possible as long as we have money,” says Shatti.

While owning exotic wild animals is illegal in Kuwait, Jaber is not afraid of the authorities because she has wasta, a popular term in Arab countries meaning “influence”.

“It is very important in Kuwait. If you know somebody who has a good position, then he is going to protect you,” says Jaber. 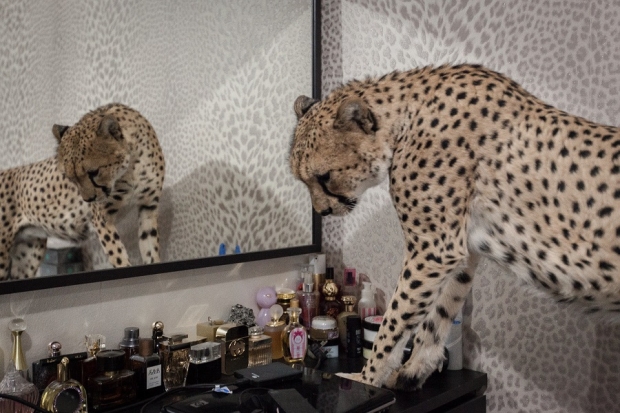 A cheetah looks at the perfumes belonging to Shahad al-Jaber, 32, in her bedroom (MEE/Sebastian Castelier) 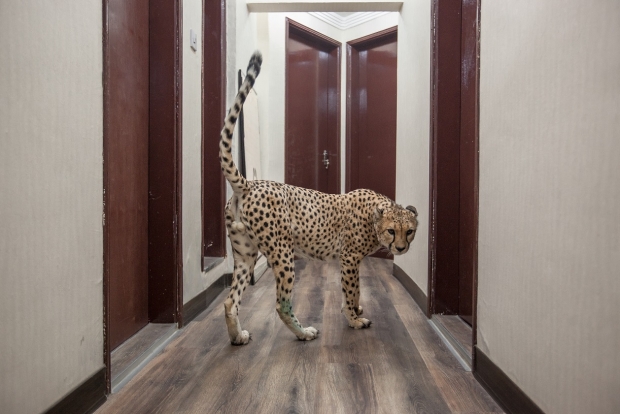 A cheetah walks in the corridor of the apartment of Shahad al-Jaber, 32, in Kuwait (MEE/Sebastian Castelier)

Jaber purchased the cheetahs when they were only a few months old, via an active smuggling circle at the Kuwait International Airport (KWI). 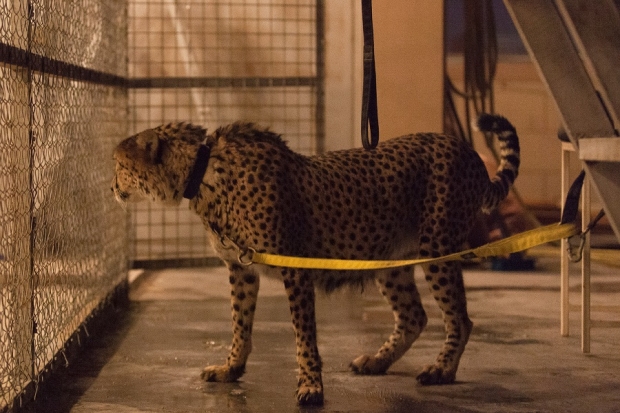 Abo Mobark, a three-year-old male cheetah, is attached to a rope on the roof of their owner Abu Mubarak al-Rasheede’s house (MEE/Sebastian Castelier)

An employee working in the airport’s administration, who wants to remain anonymous for security reasons, confirmed to MEE that “it is enough to mention that they are ‘cats’ on the box and to pay certain people I know. It is easy for me because I work there and I know who will take the money. I give them between 500 and 1000 KD ($1,600-$3,200 ) to allow illegal animals [through the country].”

In response to the claims, an airport spokesperson told MEE in a statement that “the matter was under investigation” but as the accusations are significant, no answer could be given “before all aspects are verified”.

Patricia Tricorache, assistant director for the Illegal Wildlife Trade Cheetah Conservation, has led long investigations into the smuggling of cheetahs across the Arabian Peninsula. According to her estimation, 300 young cheetahs are sent illegally every year from Ethiopia, Somalia and the north of Kenya, to pass via Yemen before heading towards Kuwait or other Gulf countries.

Shereefa al-Salem, who works for the department of preservation of bio-diversity in Kuwait’s environmental public authority (EPA), is in charge of the implementation of the Convention on International Trade in Endangered Species of Wild Fauna and Flora (CITES) in Kuwait.

In January, Salem said that they proposed stricter regulations on owning wild animals in Kuwait without elaborating on the provisions of the draft law. But the draft bill has not been approved by the Kuwaiti parliament yet.

A tragedy waiting to happen

At the end of 2014, the lion of a popular owner of exotic animals mauled a Filipina maid that died from her wounds a few days later. Her death provoked outrage across Kuwait.

Mohammad, a friend of the maid’s employer, claims that he hid the lion in question in his house after the accident. Because of the scandal, the authorities pressured his brother and father to turn the lion in. According to Mohammad, he picked up the lion from his friend’s house and shot it in the desert as he was afraid of implicating himself by giving the lion to the authorities.

“He did not take it to the police station because one of his contacts in the police told him that if he did that, he would be giving the police the murder weapon. Then he went to the desert and killed the lion,” Mohammad explains.

Mohammad, himself the owner of seven lions, a tiger and a jaguar, felt scared and organised the transfer of the exotic animals to his property in the nearby UAE. “I took them out of the country one by one by, through Saudi Arabia and over the border with the United Arab Emirates. I made them sleep with some chloroform. There at least they have a lot of space with gazelles and they can catch their own food.”

Wild cats are known to have been domesticated in Kuwait and neighbouring Gulf countries, with some even spotted being taken outside in the middle of big cities. Last year, a tiger was spotted roaming a motorway in the Qatari capital Doha.

In January, the UAE outlawed the private ownership of exotic wild animals, including cheetahs and tigers, after mounting pressure from animal welfare groups. Penalties include jail for up to six months and a fine of up to $136,000. In October, five tigers were captured on video running on the beach near Dubai’s Burj al-Arab hotel.

Animal rights activist Hanan al-Saraf, 39, is frustrated with this situation. “I do not know how these people can still post on Instagram photos of their exotic animals without getting in trouble with the authorities. I have given them numerous cases with addresses, telephone numbers and other information, but they [the authorities] have never acted on it,” asserts the Kuwaiti activist.

“I think that it would take a new disaster for the authorities to wake up,” she warns.

Bahrain: Over 5,000 people volunteered for the vaccine trial