Lawyers fighting to release foreigners unfairly arrested in Dubai have faced silence, dismissive embassy staff and hostile security guards as they try to persuade the Arab state to modernise its draconian laws.

David Haigh, a partner for the campaign group Detained in Dubai, said all attempts to discuss how to avoid locking up innocent people had fallen on deaf ears.

And he warned that by refusing to engage, Dubai’s rulers were risking its vital tourist trade.

Among them is Lucas Belmonte, 22, who was arrested on suspicion of fraud after using a friend’s credit card to pay for a meal. 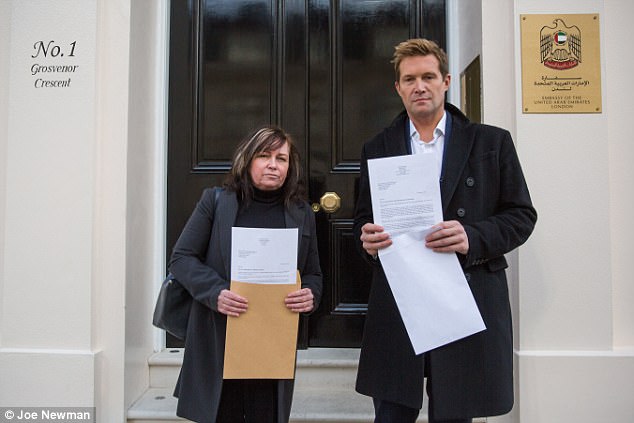 David Haigh, a lawyers in the UK fighting to release Britons unfairly arrested in Dubai, and a mother whose son is being held in the Arab state visited the UAE Embassy in London 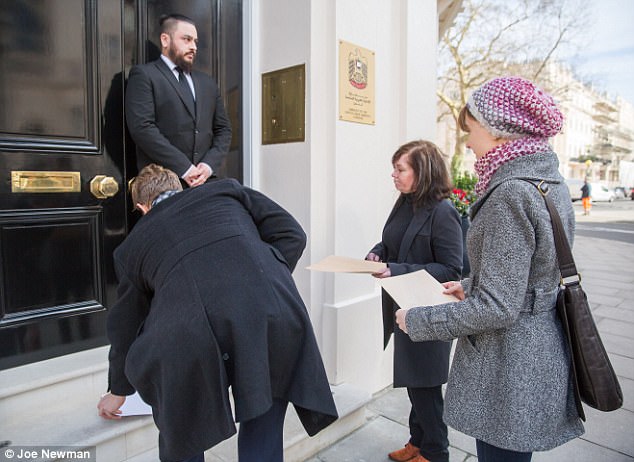 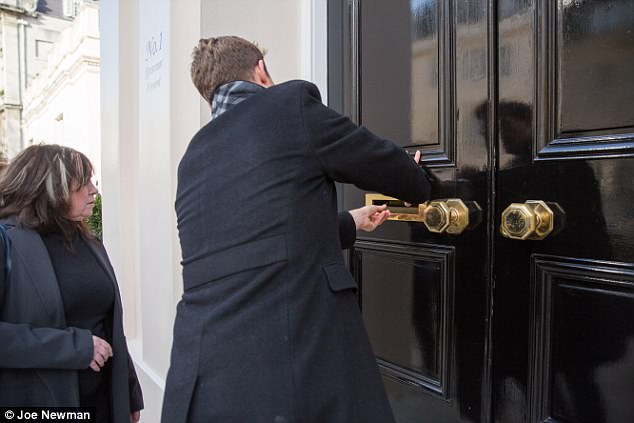 Mr Haigh later went back and pushed the letter through the brass letter box but doubted it would ever be read. ‘This is typical of the problem we face,’ he said

They also include 21-year-old Asa Hutchinson who faces years in jail after witnessing a brawl involving some of her friends at a hotel and Jamie Harron who spent three months behind bars for brushing a man’s hip.

Mr Haigh, a former solicitor, said he and his colleagues were desperately keen to meet Dubai’s lawmakers to talk about the problem.

But when he sent a letter to the United Arab Emirates Embassy in London requesting a meeting, he was met with silence.

The letter expressed concerns about Britons suffering ‘wrongful prosecution, unwarranted detention, and restriction of movement due to serious endemic flaws in the UAE legal system’.

It went on: ‘The goal of our work is not to undermine the United Arab Emirates. We want to see the country improve and prosper, and we have offered to work with them in advancing reforms.’

But Mr Haigh’s attempt to hand deliver the letter on Friday was rebuffed by security staff at the embassy in Knightsbridge who told him to leave it on the doorstep outside.

‘This is typical of the problem we face,’ he said. ‘We just want to have an open dialogue with the embassy but they are not interested. When we try to call and arrange a meeting they never respond.

‘They will not even take our letter. We only want to sit down with them and talk about the situation where many people, either tourists of people working there, end up being arrested.

‘The legal system in Dubai has not kept up with the pace of change and modernisation of the country which attracts so many people. They just will not engage with us.’

Mr Haigh later went back and pushed the letter through the brass letter box but doubted it would ever be read.

Since being founded in 2007, Detained in Dubai has helped thousands of people from all over the world who have been arrested and jailed in the country.

Often those detained are presumed guilty and have to prove their innocence but end up spending weeks in jail until they are released.

Haigh, a former managing director of Leeds United football club, knows from bitter first-hand experience what it is like to be on the wrong end of the Dubai criminal system.

He spent five months in jail after being accused of ‘Twitter abuse’ when involved in a dispute with a rival company.

‘I know what it is like to be locked up in a foreign country with no support from anyone and not able to get any answers from anyone,’ he said.

‘The Foreign Office only ever offer minimal support and often it is left to families to try and get their loved ones out of jail.’

Detained in Dubai has been helping office worker Miss Hutchinson who claims she is innocent of any wrongdoing.

Miss Hutchinson, from Chelmsford, Essex, was arrested after her friends were involved in a fight with a Swedish man at a hotel.

They were said to have taken photos of the man in his 50 sleeping and when he woke up began arguing and fighting.

Her friends fled the country, but Miss Hutchinson – who was living and working in Dubai – was told that the criminal charges were being transferred to her as the men were no longer in the country.

She has maintained her innocence and said she was not even present when the altercation took place.

Dubai law dictates that whoever makes the first complaint is the party most likely to be believed. It is also illegal for photographs to be taken without the person’s consent.

The 27 year old from Stirling, Scotland, claimed he had simply been trying to avoid spilling his drink when he touched the man.

He had also been accused of drinking alcohol and making a rude gesture towards the businessman who made the complaint.

The charges against him were dropped following the intervention of the country’s ruler Sheikh Mohammed bin Rashid al-Maktoum but he still spent three months in detention awaiting trial.

After his release and return home, Mr Harron said: ‘The whole thing is a shambles. There was no organisation or anything.

‘I think I’ve just been caught up in a bad situation. The man had a power trip. I still can’t believe it actually happened but I kept positive all the way through.’

He praised Detained in Dubai which campaigned to get him freed: ‘They’ve done very well. They’ve helped me a lot.’.

Mr Haigh said the uncompromising stance of the Dubai authorities would not only affect the influx of tourists but the more than 250,000 Brits who work there, attracted by the tax free salaries and luxury lifestyle.

‘They are going to have a problem soon and it will start to affect tourism,’ he said.

‘People will become more aware of what goes on there and will stop going. All we want to do is talk to them explain what we are doing.’