16 November 2017 – The Prime Minster of Lebanon, who is allegedly being ‘detained’ by Saudi Arabia, has accepted an invitation to meet the French President in Paris, and is expected to leave Riyad ‘within 48 hours’.

Saad al-Hariri, 47, suddenly announced his resignation in a statement read from Saudi Arabia earlier this month, a move which saw Beirut accuse Riyad of keeping him under house arrest.

Saudi Arabia’s foreign minister has today said it was Hariri’s decision to resign and it will be his decision to decide when to return to Lebanon.

Adel al-Jubeir said Thursday, that although Hariri will go back to Lebanon, he will not do so before he has ‘studied the security situation’ in the country.

Lebanon’s President Michel Aoun, who has refused to accept Harari’s resignation, said he hopes an official visit to France would put an end to the country’s political crisis.

‘We hope that the crisis is over and Hariri’s acceptance of the invitation to go to France is the start of a solution,’ Aoun said on the official presidential Twitter account.

‘I am awaiting the return of Prime Minister Hariri from Paris for us to decide the next step with regards to the government.’

Hariri, 47, met French Foreign Minister Jean-Yves Le Drian in Riyadh and was invited to come to Paris for talks with President Emmanuel Macron. 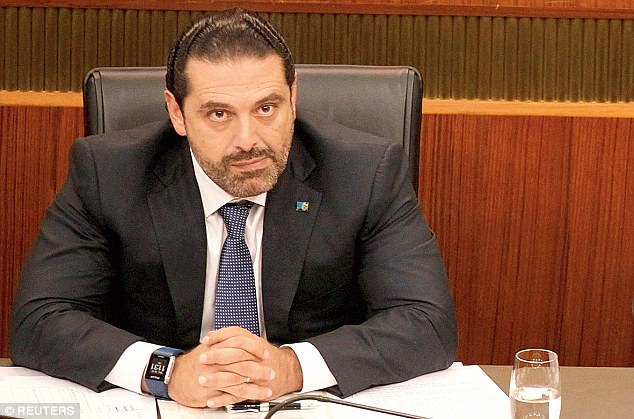 Hitting back: Former Prime Minister Saad Hariri has insisted that he is free to leave Saudi Arabia whenever he likes, and is now set to leave for France within the next 48 hours

‘He will come to France and the prince has been informed,’ Jean-Yves Le Drian told reporters, referring to Saudi Crown Prince Mohammed Bin Salman with whom he held talks late on Wednesday.

Asked about the date of the visit, Le Drian replied: ‘Mr. Hariri’s schedule is a matter for Mr. Hariri,’ but a source said he is expected to leave Riyadh for France within the next 48 hours.

Yesterday, President Aoun  said as there was no reason for Hariri to still be in Saudi Arabia, he therefore considered him ‘held and detained’ by Riyad,

‘Nothing justifies the failure of Prime Minister Saad Hariri to return for 12 days, therefore we consider him to be held and detained, contrary to the Vienna Convention,’ Aoun said in a tweet on the official Lebanese presidency account yesterday.

However, Hariri soon used the same medium to respond:  ‘I want to repeat and affirm that I am perfectly fine and I will return, god willing, to dear Lebanon as I promised you, you’ll see,’ he wrote on Twitter. 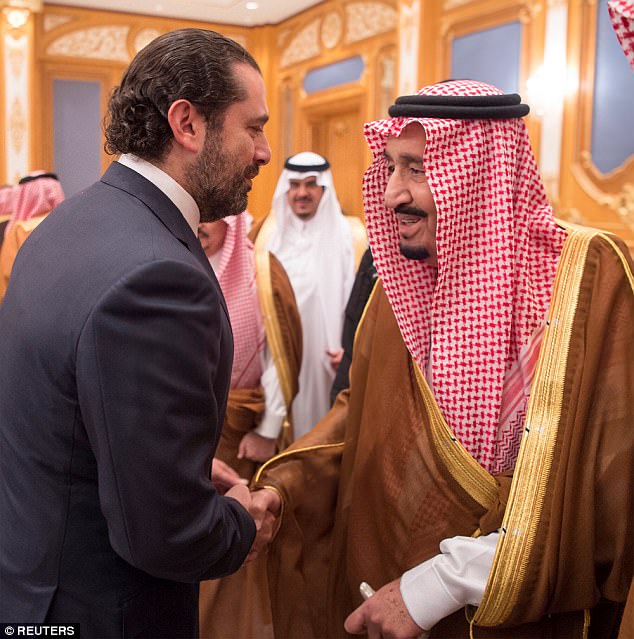 Hariri resigned as prime minister in a shock declaration read from Saudi Arabia, pitching Lebanon into deep political crisis and pushing the country back to the forefront of a regional struggle between Saudi Arabia and Iran.

At the time, Hariri accused Iran and its Lebanese ally Hezbollah of taking over his country and destabilising the broader region.

It led to speculation that he had been coerced to leave his post by Riyad and that he was under de-facto house arrest.

Hariri refuted this in an interview Sunday, saying ‘I am free here. If I want to travel tomorrow, I will,’ Hariri said.

‘I will return to Lebanon very soon,’ Hariri said, adding later that he would land in Beirut ‘in two or three days’ – a promise which he has not kept.

In the interview with his party’s own TV channel, Hariri, repeated accusations that that Iran and Hezbollah are interfering in Lebanon.

‘We cannot continue in Lebanon in a situation where Iran interferes in all Arab countries, and that there’s a political faction that interferes alongside it.

‘Maybe there’s a regional conflict between Arab countries and Iran. We’re a small country. Why put ourselves in the middle?’ 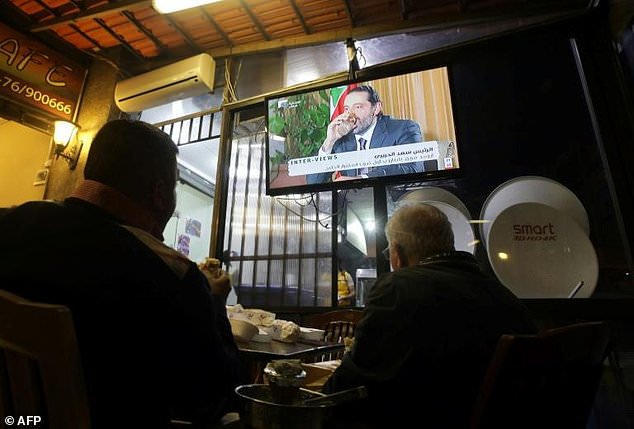 Explaining himself: Lebanese watch an interview with resigned prime minister Saad Hariri at a coffee shop in Beirut 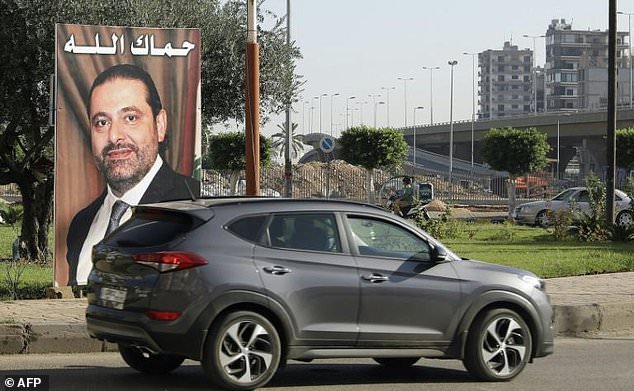 A poster of Lebanese Prime Minister Saad Hariri, hangs beside a roundabout in the northern Lebanese port city of Tripoli

Hariri, who also holds Saudi citizenship and whose father made his fortune in Saudi Arabia, said that he wrote his resignation himself and wanted to submit it in Lebanon, ‘but there was danger’.

He also appeared to lay down an exit strategy, saying he would be willing to ‘rescind the resignation’ if intervention in regional conflicts stopped.

‘We need to respect the disassociation policy,’ Hariri said, referring to an agreement among Lebanese political factions that they would not interfere in Syria’s six-year war.

He appeared to be alluding to Hezbollah’s military intervention on behalf of the Syrian government, to which Hariri is opposed.

Hariri, a two-time premier, cited fears for his life when he resigned from his post, less than a year after his unity government was formed with Hezbollah.

The Arab League said it would hold an extraordinary meeting on Sunday at the request of Saudi Arabia to discuss ‘violations’ by Iran in the region.

Kuwait: Plan to cut down expat numbers close to approval

Bahrain: Global crisis leads to a revenue fall of 29%

Saudi: Private firms to receive wages support based on the extent...