The bling kings have taken over London again as foreign playboys parade their luxury supercars at some of the capital’s most exclusive hangouts.

The arrival of the supercars in July and August has become a regular event in recent years, with rich Gulfies seeking to out-do each other over who can own the flashiest motor.

Cars on show this year include a blue and silver Rolls Royce at the Grosvenor House Hotel in Mayfair, a silver Lamborghini with red strips and a Brabus with a Saudi number plate outside the Dorchester Hotel.

Rich owners will happily pay a small fortune – in excess of £20,000 for a return journey – for their metal marvels to be flown around 3,000 miles, and often leave them parked in some of the capital’s most desirable spots.

Despite their impressive top speeds, many of the cars rarely get out of the gridlocked London traffic and spend much of the time parked outside Harrods and other luxury boutiques.

In recent years neighbours across the Royal Borough of Kensington and Chelsea have complained about the annual displays, with millionaire boy racers flaunting their high-powered machines.

In the past, the council has deployed Public Spaces Protection Orders in Knightsbridge, which deal with the ‘excessive level of noise nuisance, annoyance, danger or risk of harm or injury’.

Boy racers can be fined up to £1,000 for leaving their engines running while parked if they are causing a disturbance.

In previous years a Mercedes with Swarovski crystals and a £1million Pagani Huayra have attracted attention. 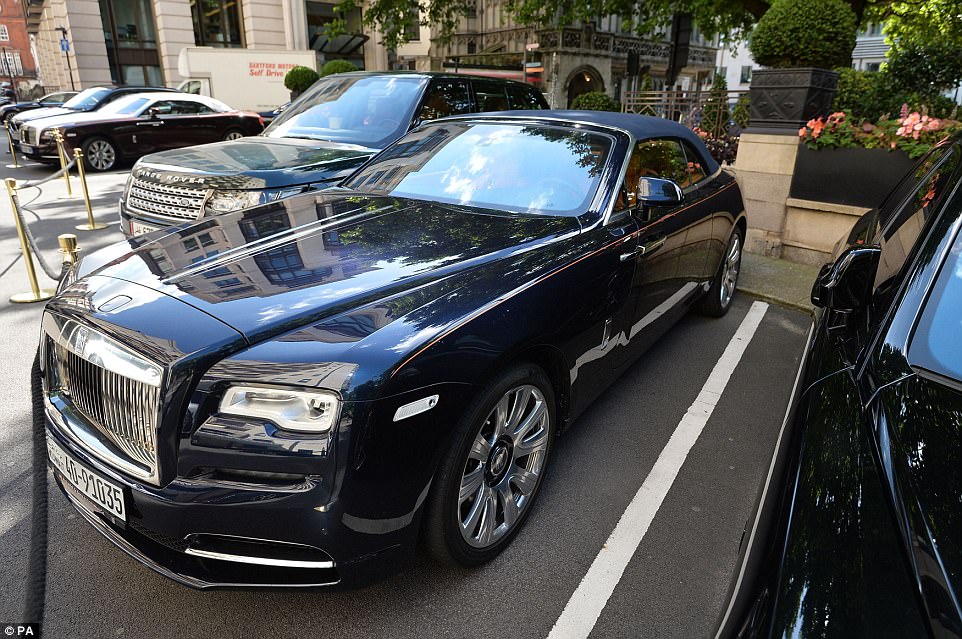 A Rolls Royce, which costs around £250,000, with a Kuwait number plate is parked by The Dorchester Hotel, during the month when hundreds of Middle Easterners fly-in and drive around London in supercars 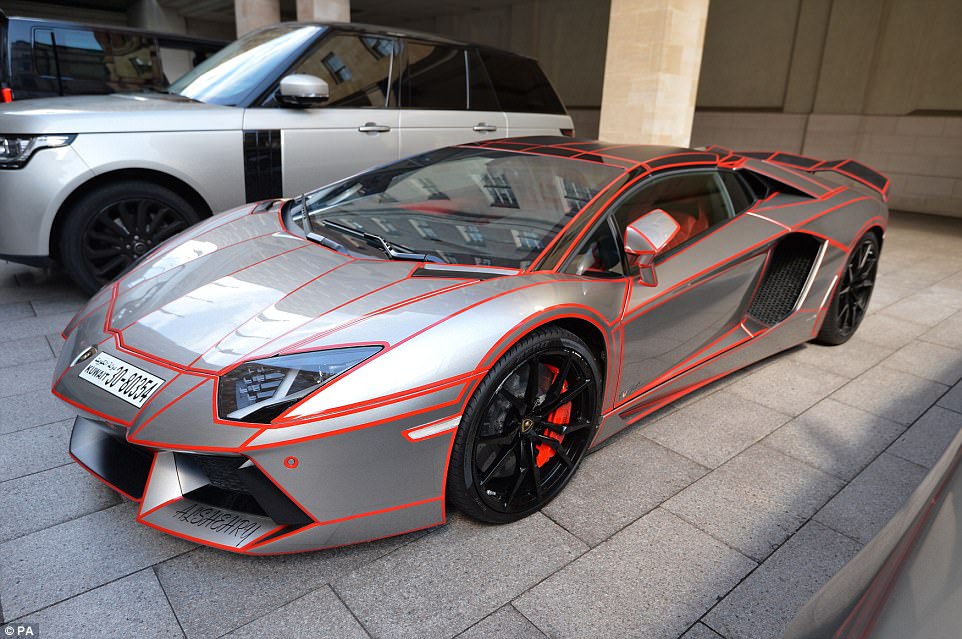 A silver Lamborghini, which cost up to £192,000, with red stripes and a Kuwait number plate is parked at the Grosvenor House Hotel in Mayfair 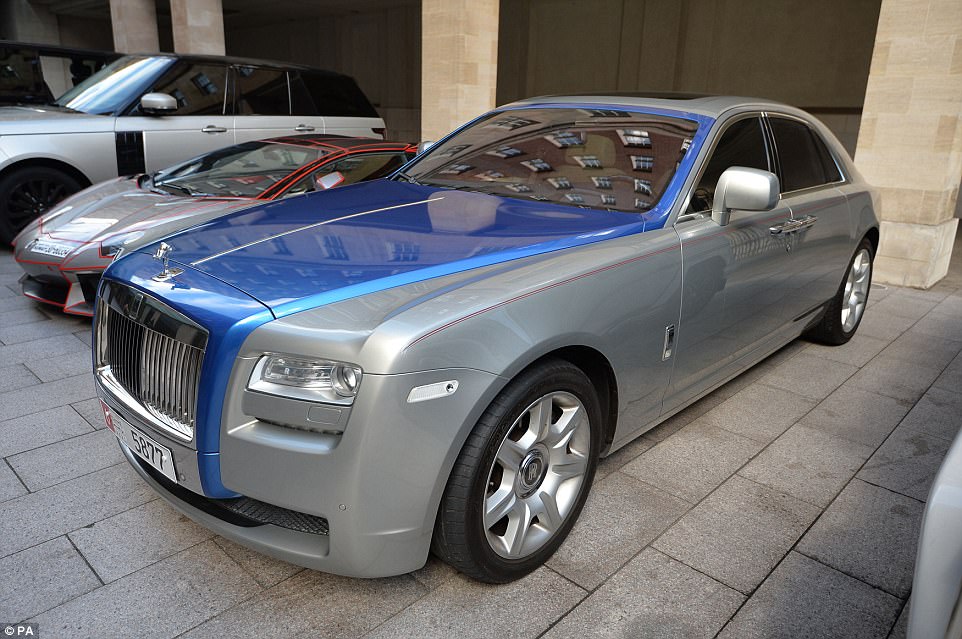 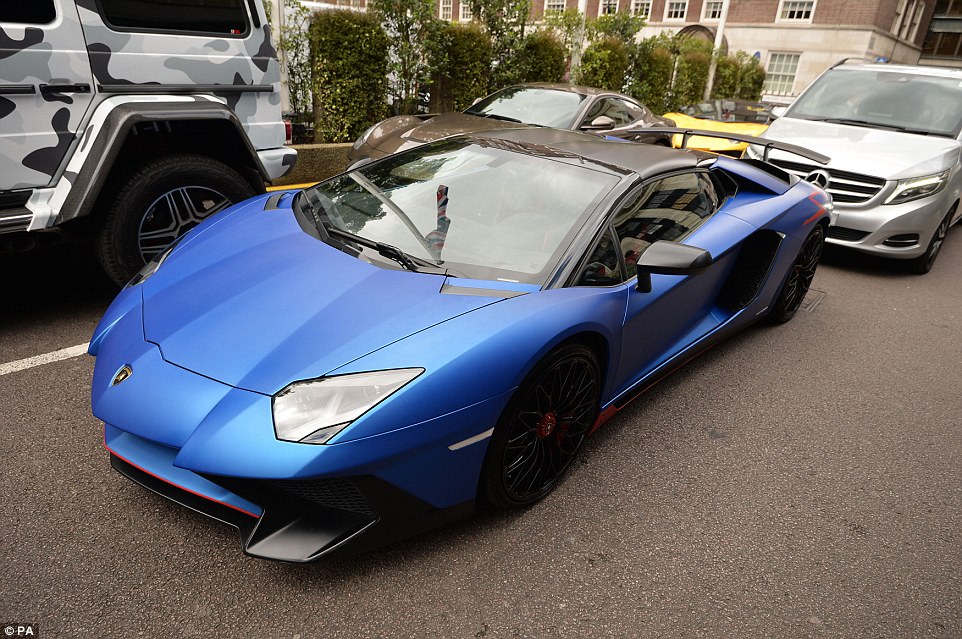 A blue Lamborghini with a Qatar number plate is seen in Mayfair, during the season when wealthy Arabs flee the scorching hot temperatures of the Middle East and cruise around the British capital in their ostentatious vehicles 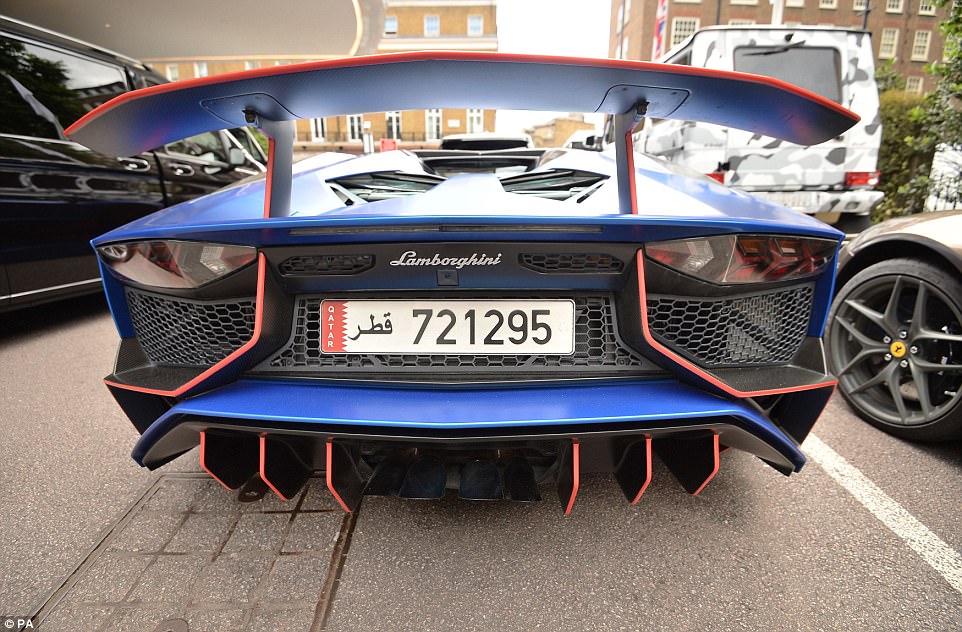 The blue Lamborghini, pictured in Mayfair, is one among hundreds which have been flown into the UK from the Middle East 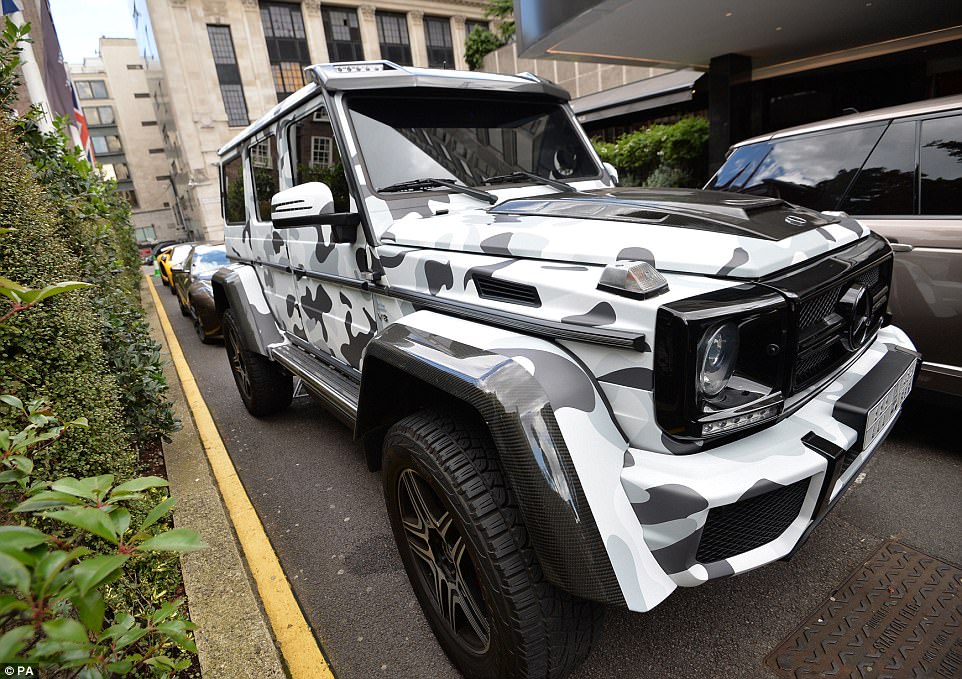 A camouflage Mercedes with a Saudi Arabia number plate in Mayfair, in front of a fleet of luxurious sports cars 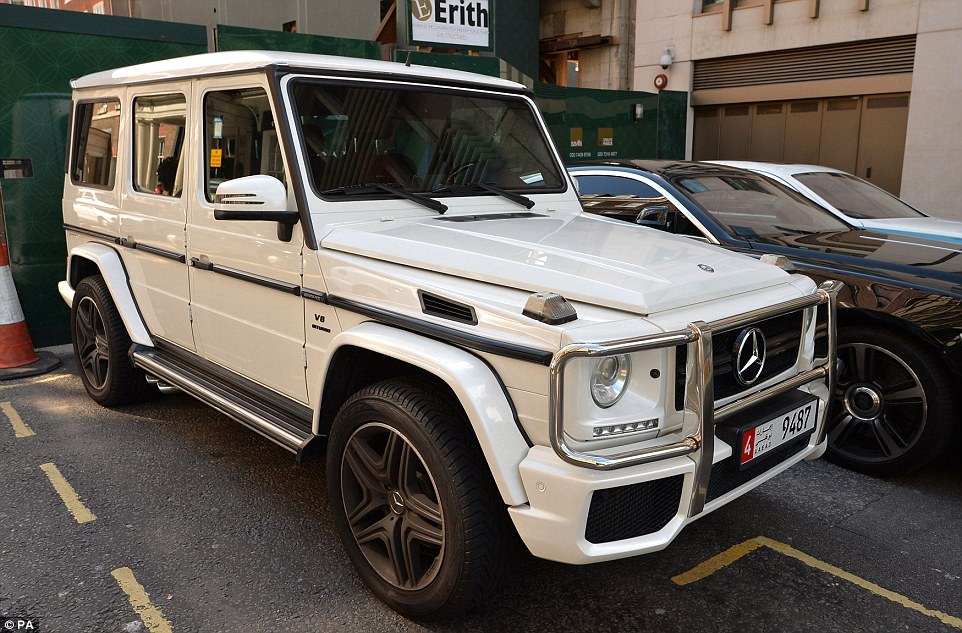 A Mercedes 4×4, which costs around £135,000, with a United Arab Emirates number plate is parked in Mayfair, London, as London’s supercar season begins 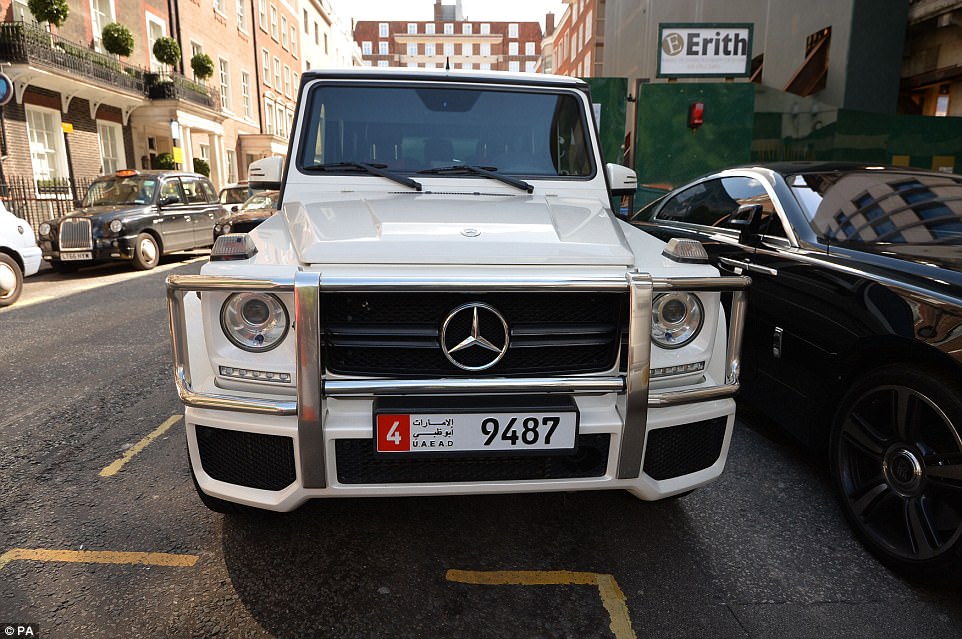 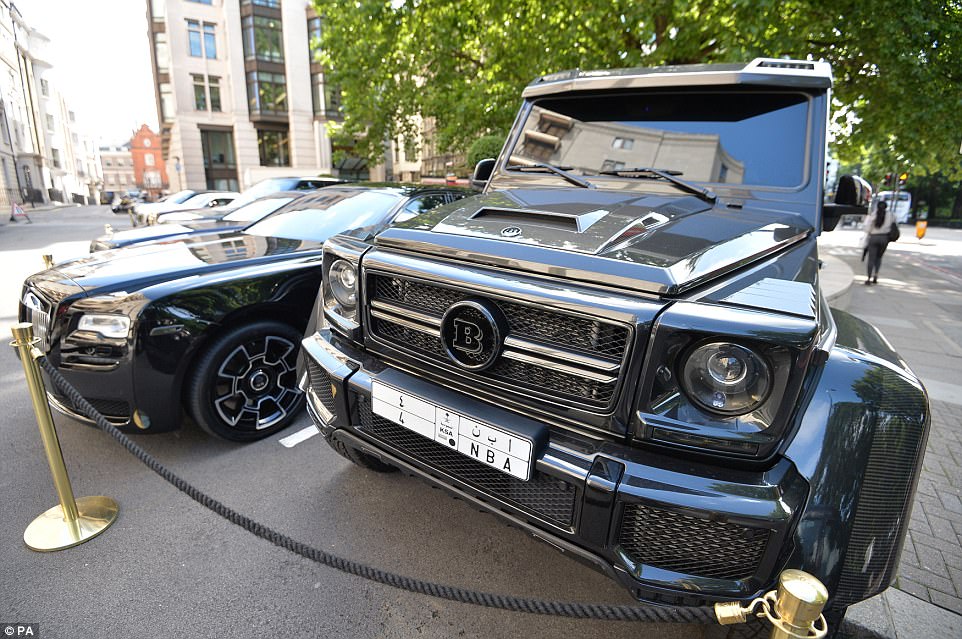 A Brabus 4×4, which can cost up to £240,000, with a Saudi Arabia number plate is parked by The Dorchester Hotel as supercar season kicks off again 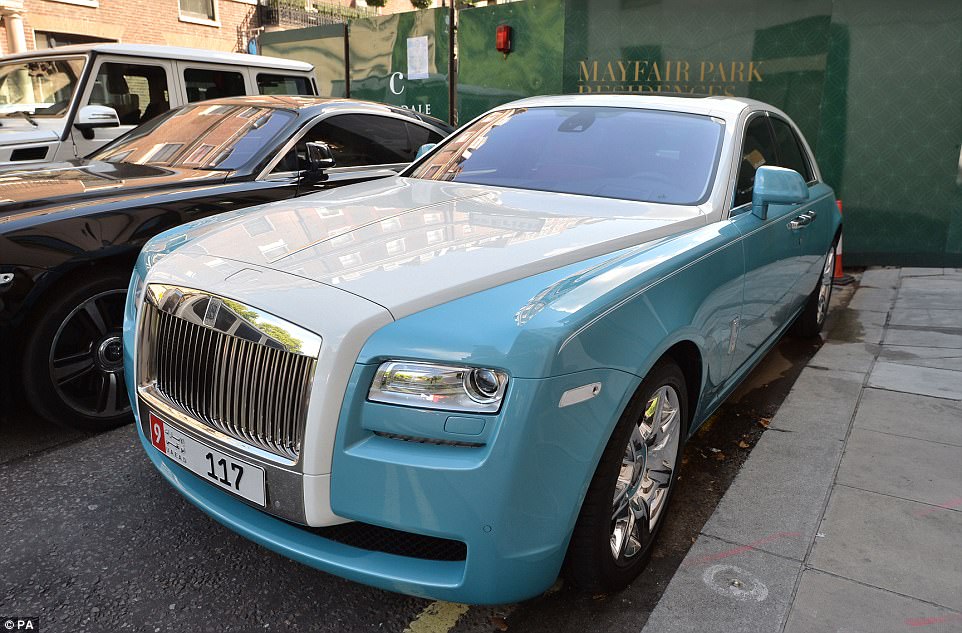 A Rolls Royce with a United Arab Emirates number plate is parked outside Mayfair Park Residences, in central London 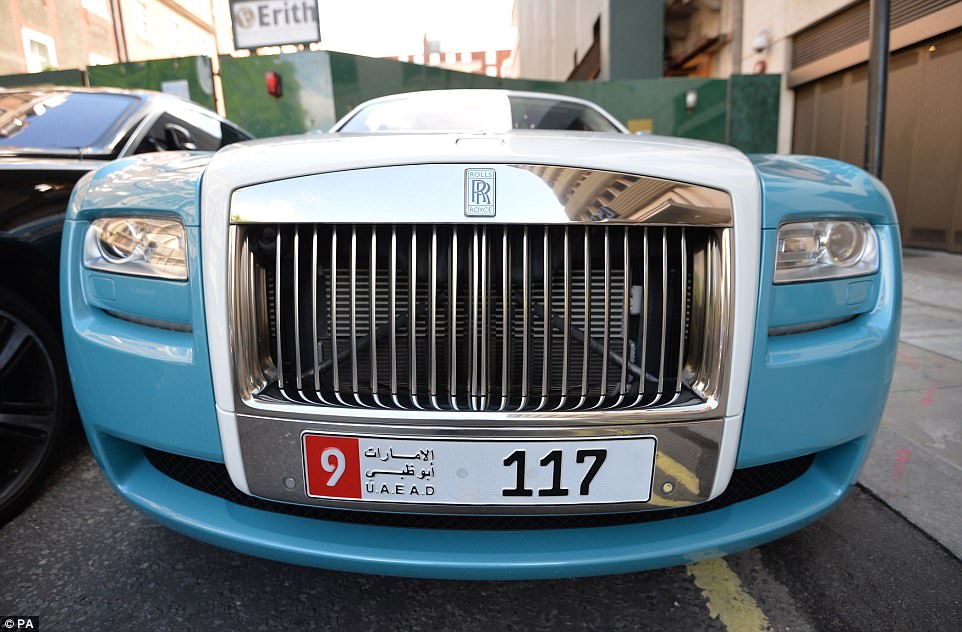 The arrival of the supercars has become a regular event in recent years, with rich Arabs seeking to out-do one another 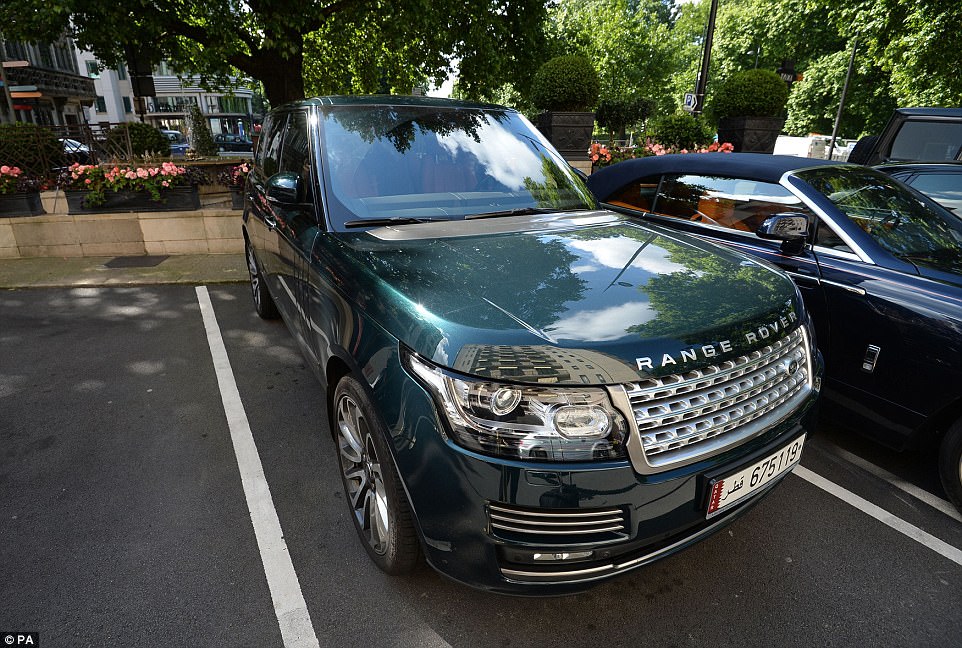 A Range Rover with a Kuwaiti number plate is parked by The Dorchester Hotel, during ‘supercar season’, the period from July to August when some of the world’s richest descend on the capital’s most exclusive spots

Arab-owned supercars arrive in London having been flown distances of around 3,000 miles in planes – costing around £20,000 per vehicle.

Qatar Airways is one such airline that ships the luxury cars from Doha to Heathrow. Secured to the floor of one of their Airbus A330s, the precious cargo can either be accommodated in a single row or in a side-by-side configuration.

Using their main and lower deck, the airline offers 31 positions on each flight.

In November it was announced Emirates was following Etihad Airways in offering a door-to-door cargo and delivery service for vehicles as part of its freight division.

The service includes pick-up and drop-off of the vehicle from its home and destination addresses, in addition to export and import customs clearance processes at both ends of the journey. 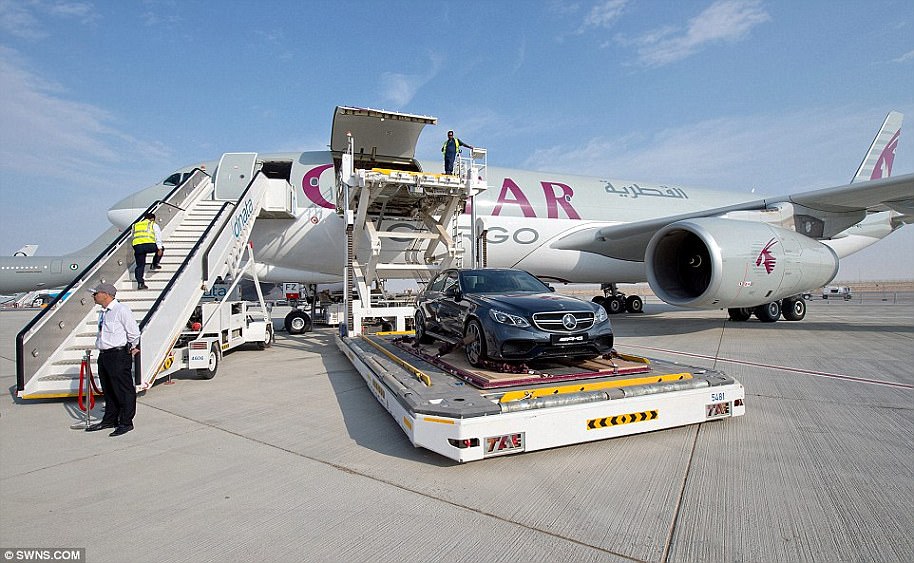 Qatar Airways is one airline that ships the luxury cars from Doha to Heathrow (pictured: Mercedes-Benz being put on a plane)

Australian Bushfires – What You Need to Know?

First Ever Children’s Waterpark in Bahrain