- Advertisement -
A picture taken in November 2017 shows the Instagram photo posted by Sarah Idan, Miss Iraq, of a selfie she took with Miss Israel, Adar Gandelsman.

Six months after a selfie of Miss Universe contestants from Iraq and Israel was posted on Instagram and sparked an international incident, the two women have reunited.

Sarah Idan of Iraq and Adar Gandelsman of Israel met in Jerusalem this week, seemingly unfazed by the controversy from November last year. The duo posted pictures of themselves together at a photo shoot and eating at an Iraqi restaurant.
The furor over their friendship erupted when Idan posted a photo with Gandelsman during a pre-pageant photo shoot in Las Vegas. In the caption, Idan wrote “Peace and Love from Miss Iraq and Miss Israel.”
The picture was swiftly criticized due to the fraught relations between Iraq and Israel, which do not have formal diplomatic relations. Idan said she woke up to death threats online and phone calls from people condemning the post.
“When I posted the picture I didn’t think for a second there would be blowback,” Idan said. “I woke up to calls from my family and the Miss Iraq Organization going insane. The death threats I got online were so scary.” 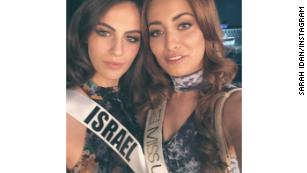 Idan refused to take the photo down but did post a second Instagram photo saying that she doesn’t support the Israeli government or its policies in the Middle East, and she apologized for “anyone who thinks it’s an attack for the Palestinian cause.”
Her family in Iraq also receive death threats and were forced to leave the country.
Idan’s visit to Israel was welcomed by the government.
“Miss Iraq Sara Idan is currently visiting Israel & has reunited w/ Miss Israel, her old friend from the @MissUniverse pageant. Welcome to Israel!” Ofir Gendelman, an Israeli government spokesman, said on twitter in English and Arabic.
“Friendly relations between Israelis & Arabs will defeinitely [sic] help in ushering in a better tomorrow for all of us in the Middle East.”
- Advertisement -
- Advertisement -

India: Over 10,000 Evacuated from Homes Ahead of Cyclone