Mohamed bin Salman, left, with his cousin Mohammed bin Nayef who he has replaced, right

The king of Saudi Arabia has appointed his son Mohammed bin Salman as crown prince, making him first in line to the throne at the expense of his nephew, Mohammed bin Nayef, a well known counterterrorism figure.

Prince bin Salman, 31, is currently deputy crown prince. The young royal – who has built his reputation as a bold economic reformer and for his hawkish foreign policy – will continue in his position as defence minister as well as become deputy prime minister in the new role.

He replaces his cousin Prince Mohammed bin Nayef, 27 years his senior, who was dismissed by King Salman by royal decree on Wednesday. The young prince is now by some stretch the second most powerful person in the kingdom – and if his 81-year-old father dies, he will be the youngest king the modern state has ever seen.

To celebrate the appointment, King Salman  ordered the reinstatement of all benefits and allowances for government employees that have been curbed by austerity measures, and granted additional days off for the upcoming Eid holiday at the end of Ramadan.

The appointment of such a young royal as the immediate heir to the throne efectively sets the tone for Saudi policy for decades; Saudi Arabia’s stock market was up by more than 3.5 per cent in mid-day trading on Wednesday.

Prince bin Salman’s rise has followed that of his father: King Salman ascended to the throne in January 2015 after the death of his half-brother Abdullah bin Abdul Aziz.

Mohammed, previously in charge of his father’s royal court, has been rapidly promoted since then to various cabinet posts at the expense of those older or more experienced.

The young prince is widely seen as the face of modern Saudi Arabia. Unlike older generations of the Saudi royal family, he has embraced media attention, his image constantly on billboards and televisions. He is the driving force behind ‘Vision 2030’, the kingdom’s long term economic plan to wean itself off dependence on oil, and is popular for his reforms to the country’s ineffective state bureaucracy.

In his role as defence minister he has attracted criticism from older Saudis and internationally for his role in Saudi Arabia’s bloody intervention in the Yemeni civil war, as well as his aggressive stance on Iran. The prince is also regarded as one of the primary decision makers behind the recent Gulf states’ cutting of ties with Qatar.

But to younger generations, used to elderly kings and princes, the socially liberal Prince bin Salman’s rise is a sign that things in the conservative kingdom are changing.

Mohammed’s younger brother Khaled, a former jet fighter pilot believed to be in his 20s, was also promoted to the prestigious role of US ambassador earlier this year. On Wednesday, another young prince, Abdulaziz bin Saud, 33, was named the new interior minister tasked with counterterrorism efforts and domestic security, replacing the former crown prince bin Nayef in the role.

The Saudis hailed the DC trip as a “historic turning point” in which the two countries discussed their common foe of Iran and cooperation in the fight against Isis. It also laid the groundwork for Mr Trump’s first trip abroad to Riyadh, where he reiterated his support for the US’ Saudi allies against their regional rival.

The new crown prince doubled down on the combative stance in comments made to state television in May, when he framed the tensions with Tehran in sectarian terms and vowed to “take the battle” to Iran.

Salman, nicknamed ‘Mr Everything’, is seen as symbolising the hopes of the youth of the country’s population, more than half of which is under 25.

Madawi al-Rasheed, a visiting professor at the Middle East Institute at the National University of Singapore, said there are rumours that Salman and Nayef have been battling behind the scenes for some time – and there remains a possibility it could continue.

She wrote in Middle East Eye: ‘With so many powers now in the hands of Mohammed bin Salman, including the soft power of the Saudi media and the global outreach of the public relations companies he employs, it is difficult to forecast any real challenges to his inauguration as the future king.’ 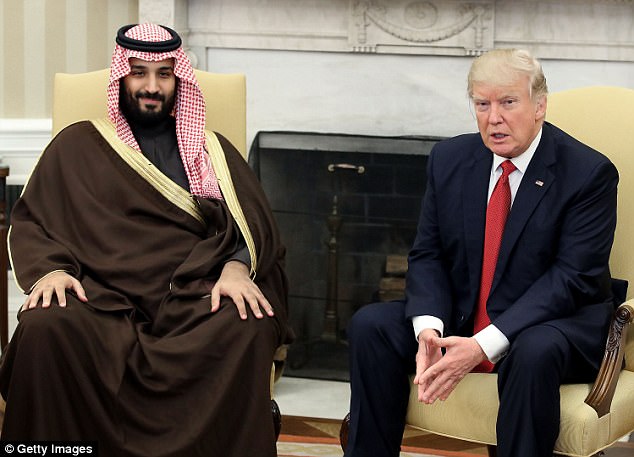 Today’s news was announced by Saudi state agency SPA, which said Nayef has been relieved of his post and replaced by Salman, who becomes deputy prime minister and retains his defence and other portfolios, a royal decree issued by the Saudi state agency said SPA.

Even as deputy crown prince, Mohammed bin Salman has been responsible for running Saudi Arabia’s war in Yemen, dictating an energy policy with global implications and spearheading plans for the kingdom to build an economic future after oil.

Al Arabiya television reported that the promotion of the prince was approved by the kingdom’s Allegiance Council, and that the king had called for a public pledging of loyalty to Mohammed bin Salman in Mecca. 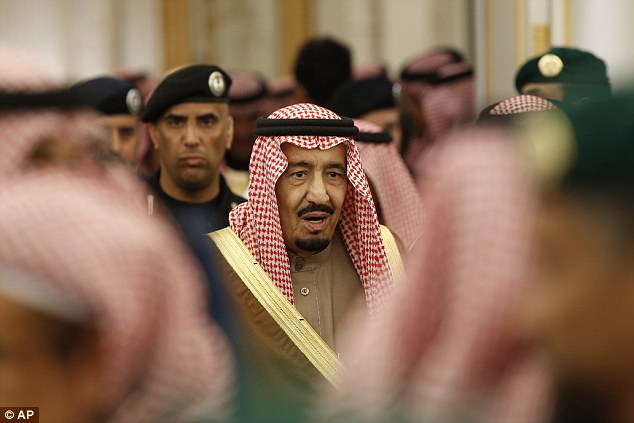 That the royal succession in the world’s top oil exporter is closely scrutinised only makes the rapidity of Mohammed bin Salman’s rise to power, and the speed with which his better known cousins were brushed aside, more astonishing.

The surprise announcement follows 2-1/2 years of already major changes in Saudi Arabia, which stunned allies in 2015 by launching an air war in Yemen, cutting back on lavish subsidies and proposing in 2016 the partial privatisation of state oil company Aramco. 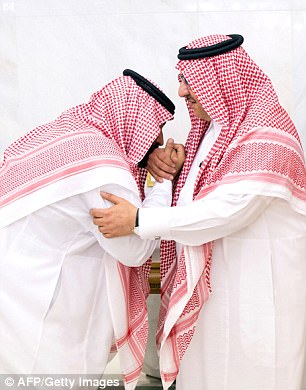 Pictured: Nayef (right) while pledging allegiance to Salman (left) after his promotion

‘He’s clearly very bright, very intelligent, very on top of all his briefs’ and has significant influence on the 81-year-old monarch, one Western diplomat said.

Among his most prominent positions is chairman of the Council of Economic and Development Affairs, which coordinates economic policy. Mohammed also chairs a body overseeing state oil giant Saudi Aramco.

It is said the prince works 16-hour days and draws inspiration from the writings of wartime British prime minister Winston Churchill and Sun Tzu’s ‘The Art of War’.

The prince has given many interviews where he has spoken at length about his economic plans – including ending the country’s ‘addition’ to oil – while other officials are traditionally tight-lipped.

In a rare press briefing in April last year, he seemed relaxed as he took questions from the domestic and international press for about 50 minutes.

A law graduate from Riyadh’s King Saud University, the dark-bearded prince with a receding hairline is the father of two boys and two girls and – unlike other members of the royal family – has married only once.

He said that although Islam allows for multiple marriages, modern life does not leave the time.

Salman spent years working for his father when he was governor of Riyadh and when he was crown prince from 2013 to 2015.

‘He has a reputation for being aggressive and ambitious,’ Bruce Riedel, a former Central Intelligence Agency officer who directs the Brookings Intelligence Project in Washington, has said.

Salman chairs the supreme board of Aramco, making him the first member of the ruling family to directly oversee the state oil company, long regarded as the preserve of commoner technocrats.

But perhaps most importantly, he also holds the critical position of gatekeeper to his father, King Salman, who in Saudi Arabia’s absolute monarchy retains the final say in any major decision of state.