Kuwait is now trying to mediate the diplomatic crisis. The United Arab Emirates said on Tuesday that Qatar would need to provide a ‘guaranteed road map’ before it would consider mending ties.

Videos of Qatar’s borders show traffic jams as residents try to return to the country from Saudi Arabia.

A ban on Qatari flights imposed by Saudi Arabia and its allies took effect Tuesday as first efforts were made to resolve the biggest feud to hit the Arab world in years.

The Gulf states and Egypt banned all flights to and from Qatar and ordered Qatari citizens to leave within 14 days.

Countries including Saudi Arabia also banned Qatari flights from their airspace and Riyadh closed its land border with Qatar, sparking panic buying in Doha amid fears of food shortages. 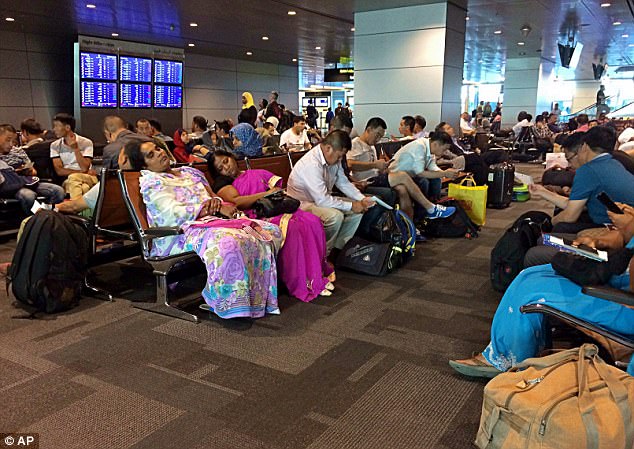 Hamad International Airport (HIA) in Doha, Qatar, was filled with passengers of canceled flights on Tuesday. 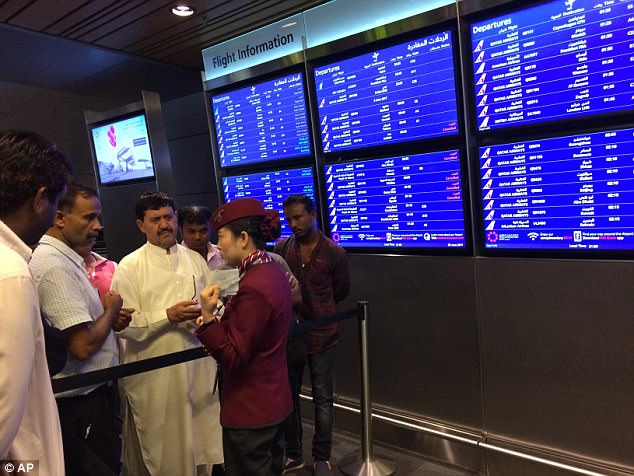 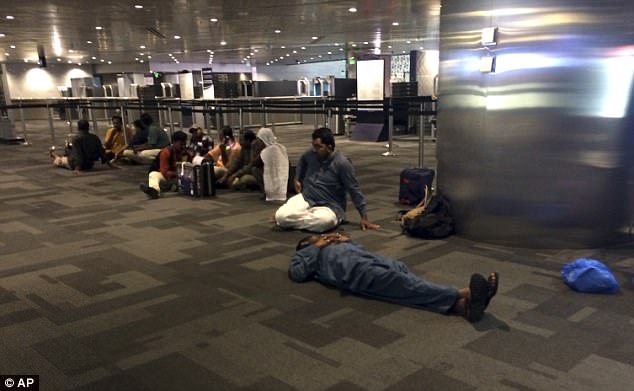 The first concrete effects were being seen on Tuesday morning, with the flight ban causing delays and cancellations. UAE carriers Emirates, Etihad, flydubai and Air Arabia, as well as Saudi Airlines had all announced the suspension of flights to and from Qatar as of Tuesday morning.

A total of 27 flights from Dubai to Doha had been scheduled for Tuesday and the Dubai Airports website showed all flights to Doha cancelled.

Qatar Airways, for its part, said it had suspended all flights to Saudi Arabia, the UAE, Bahrain and Egypt ‘until further notice’.

On Monday, shoppers had flooded Doha’s supermarkets worried that food imports would dry up.

In one store queues were up to 25-people deep as shoppers piled trollies high with supplies from rice to nappies.

In an interview with Doha-based satellite news network Al-Jazeera, foreign minister Sheikh Mohammed Bin Abdulrahman Al Thani said Kuwait’s ruler had asked Qatar’s ruling emir, Sheikh Tamim bin Hamad Al Thani, to hold off on giving a speech about the crisis late on Tuesday night. ‘He received a call from the emir of Kuwait asking him to postpone it in order to give time to solve the crisis,’ Sheikh Mohammed said. 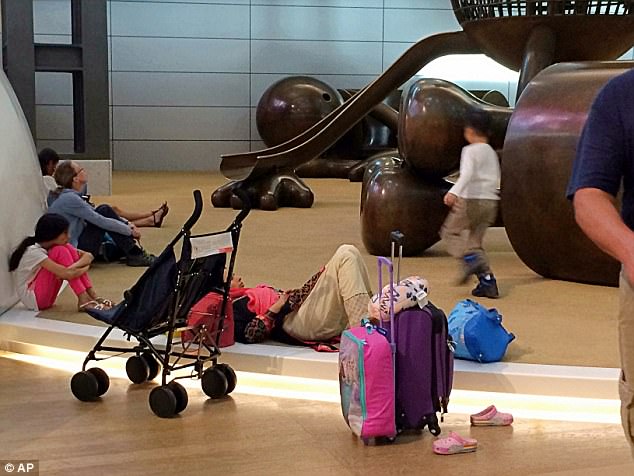 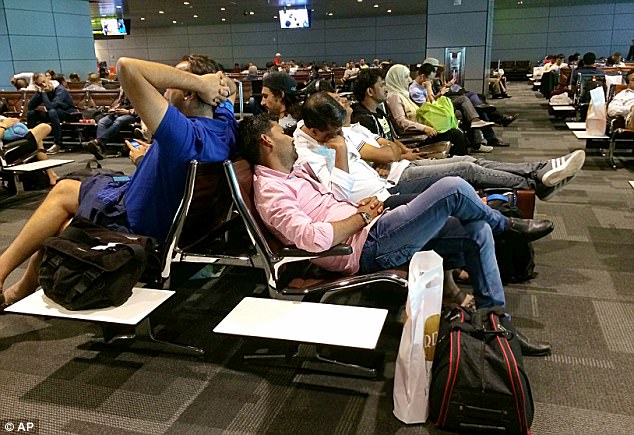 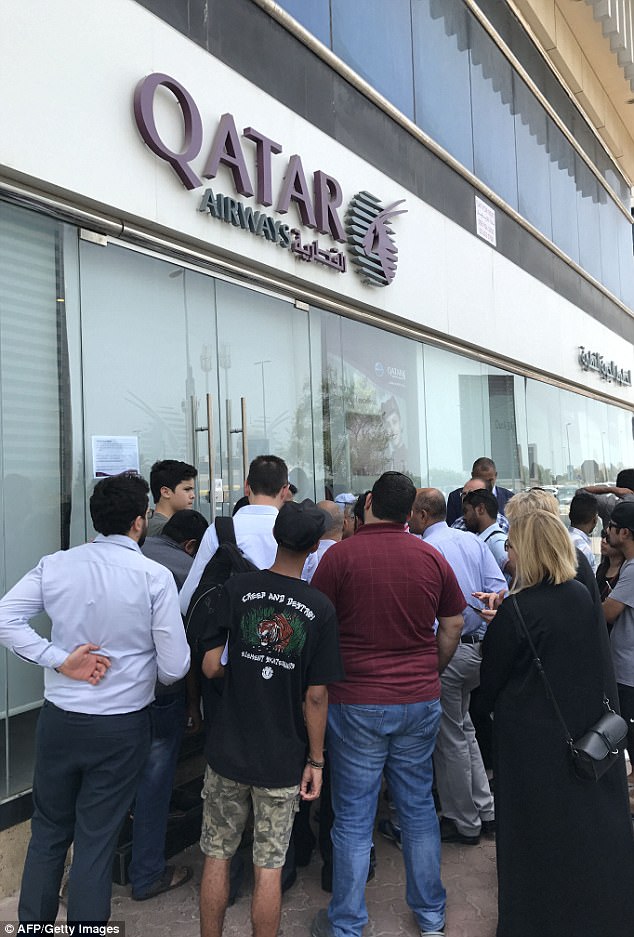 Still, the minister struck a defiant tone, vowing his nation rejected those ‘trying to impose their will on Qatar or intervene in its internal affairs’.

Kuwait and Oman did not join fellow members of the Gulf Cooperation Council (GCC), which also includes Qatar, in cutting ties with Doha.

‘Efforts aimed at containing tensions in the relations between brothers’ were discussed in the phone call, KUNA said.

Turkey, which has good relations with Qatar and other Gulf states, also offered to help and Turkish President Recep Tayyip Erdogan late on Monday spoke to the emirs of Qatar and Kuwait and to Saudi King Salman.

Algeria expressed ‘deep concern’ on Tuesday after several Arab states cut diplomatic ties with Qatar, appealing to the countries involved to resolve their differences through dialogue.

The move from six Arab countries to cut ties with Qatar came just two weeks after US president Donald Trump visited Saudi Arabia and vowed to improve ties with both Riyadh and Cairo to combat terrorism and contain Iran. 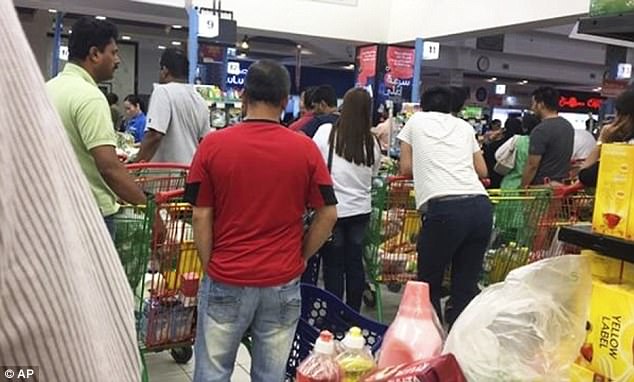 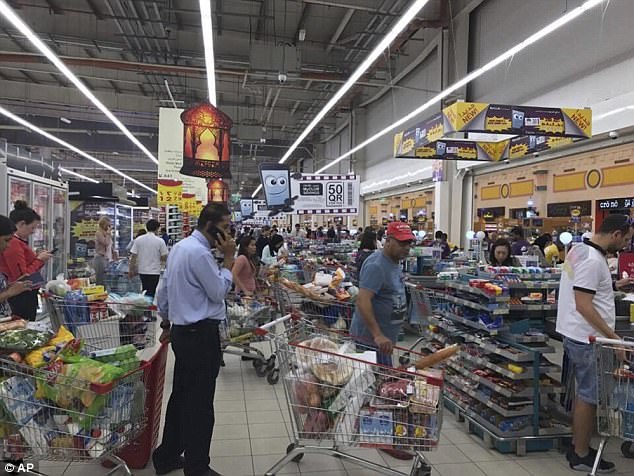 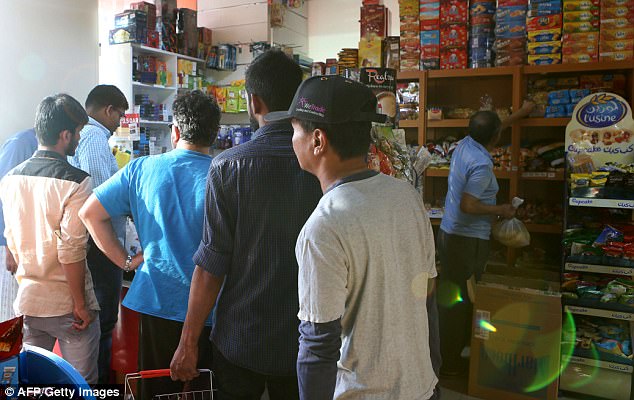 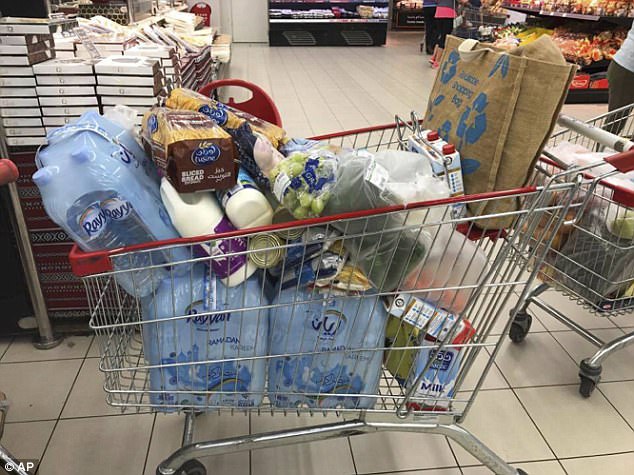 Football’s governing body Fifa said it remained in regular contact with Qatar, which will host the 2022 World Cup. It did not elaborate.

Egypt’s foreign ministry accused Qatar of taking an ‘antagonist approach’ toward Cairo and said ‘all attempts to stop it from supporting terrorist groups failed’.

The Gulf countries ordered their citizens out of Qatar and gave Qataris abroad 14 days to return home to their peninsular nation, whose only land border is with Saudi Arabia. The countries also said they would eject Qatar’s diplomats.

The nations also said they planned to cut air and sea traffic. Doha-based satellite news network Al-Jazeera reported trucks carrying food had begun lining up on the Saudi side of the border, apparently stranded.

The Qatar Stock Exchange fell more than 7 per cent in trading on Monday.

Qatar Airways, one of the region’s major long-haul carriers, has suspended all flights to Saudi Arabia, the United Arab Emirates, Egypt and Bahrain until further notice.

Saudi Arabia licences and shut down all of the airline’s offices in the country, according to a statement from the state news agency.

On its website, the carrier said the suspension of its flights would take effect on Tuesday and customers are being offered a refund.
The route between Doha, Qatar and Dubai is popular among business travellers and both are major transit hubs for travellers between Asia and Europe.
FlightRadar24, a popular airplane tracking website, said Qatar Airway flights already had started to be affected.
‘Many of Qatar Airways’ flights to southern Europe and Africa pass through Saudi Arabia,’ the site said. ‘Flights to Europe will most likely be rerouted through Iran and Turkey.’
Qatar, which has a population of 2.5 million people, is facing potential food shortages as people scramble to buy up food at grocery stores across the country. The country is largely dependent on imports of foodstuffs to meet its needs. It imports approximately 90 per cent of its food, with 40 per cent of it coming solely from Saudi Arabia.
Trade sources, who declined to be named, said the UAE and Saudi Arabia had stopped exports of white sugar to Qatar. Qatar is dependent on the UAE and Saudi Arabia for its white sugar imports, which are estimated at less than 100,000 tonnes annually.Consumption is traditionally higher during the Muslim holy month of Ramadan, which is currently being observed.
‘There will be shortages of food, certain things will be hard to find,’ Christian Henderson, a Middle Eastern food expert at SOAS University in London, told Gulf News.  Dairy, meat and vegetables are expected to be heavily impacted.

‘Supplies of sugar have been stopped and there is no indication when they could resume,’ one Middle East based trade source said.

Photos on social media have shown Qatar residents queuing up at grocery stores and emptying shelves.

Qatar’s cabinet said earlier on Monday it was still open for trade.

‘The Council would like to reassure Qatar´s citizens and residents that the government had already taken the necessary measures and precautions to ensure that normal life continues, and that there will be no negative impact caused by the latest measures,’ the Qatari government said in a statement.

Meanwhile, the Qatari currency came under pressure on Tuesday as Gulf commercial banks began to hold off on dealing with Qatari banks because of the diplomatic rift in the region, banking sources told Reuters.

The United Arab Emirates and Egypt announced they will be joining Bahrain and Saudi Arabia and withdrawing their diplomatic staff from Qatar.

Some Saudi Arabian, United Arab Emirates and Bahraini banks were delaying business with Qatari banks, such as letters of credit, after their governments cut diplomatic ties and transport links with Doha on Monday, accusing Qatar of supporting terrorism.

Saudi Arabia’s central bank advised banks in the kingdom not to trade with Qatari banks in Qatari riyals, the sources said. The central bank did not respond to a request for comment.

Qatari banks have been borrowing abroad to fund their activities. Their foreign liabilities ballooned to 451 billion riyals ($124 billion) in March from 310 billion riyals at the end of 2015, central bank data shows.

So any extended disruption to their ties with foreign banks could be awkward, though the government of the world’s biggest natural gas exporter has massive financial reserves which it could use to support them.

Banks from the United Arab Emirates, Europe and elsewhere have been lending to Qatari institutions.

Gulf banking sources who declined to be named because of political sensitivities said Saudi Arabian, UAE and Bahraini banks were postponing deals until they received guidance from their central banks on how to handle business with Qatar.

‘We will not take action without central bank guidance, but it is wise to evaluate what you give to Qatari clients and hold off until there is further clarity,’ said a UAE banker, adding that trade finance had stalled for the time being.