This is the new Rolls-Royce Cullinan and it is unquestionably the most luxurious 4×4 to hit the market – at least until Aston Martin gets in on the act.

The iconic British marque says its first purpose-built sports utility vehicle is inspired by Lawrence of Arabia’s military-readied Roller – although it has undoubtedly been designed with the super-rich in mind – as it curtsies to let you in and deploys leather-bound picnic chairs so you can enjoy equestrian events without ever leaving the vehicle.

However, Rolls-Royce will face competition in three years’ time, as fellow British brand Aston Martin has confirmed it will also make its first SUV in 2021 – and that will only come with electric power.

Rolls-Royce is outright refusing to call it an SUV, instead referring to the all-new enormous machine as a ‘high-bodied car’.

That doesn’t mean it can’t go off the beaten track, though.

It’s not like the famed British marque doesn’t have previous when it comes to creating robust all-terrain models – its highly-engineered cars have been used off-road throughout the firm’s 114-year history by the British army and Indian maharajahs, as well as in desert campaigns by Lawrence of Arabia who enthused that ‘A Rolls in the desert is above rubies’.

And this is a seriously high-rech car. 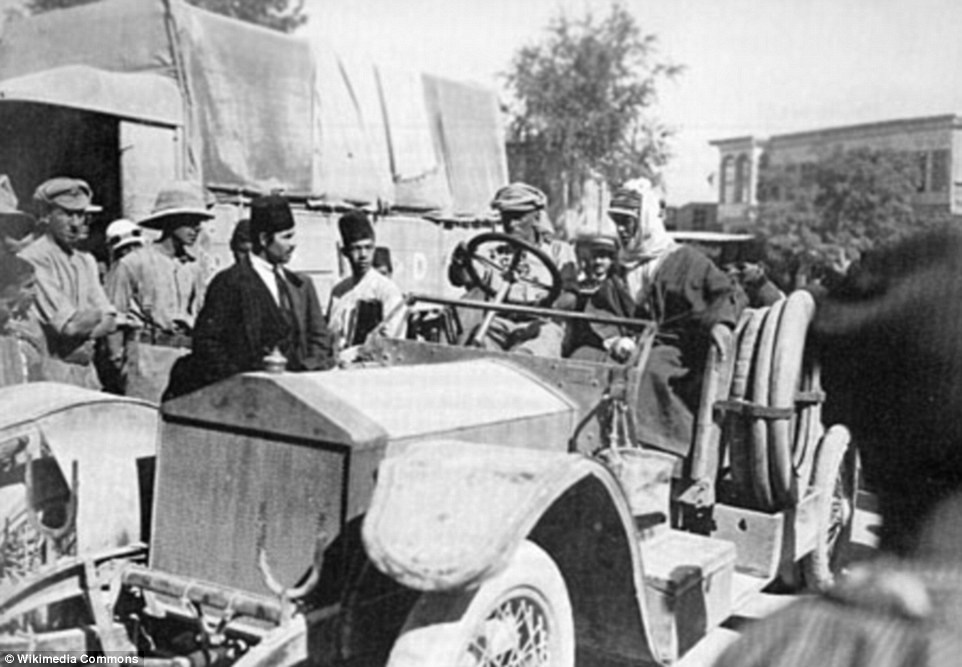 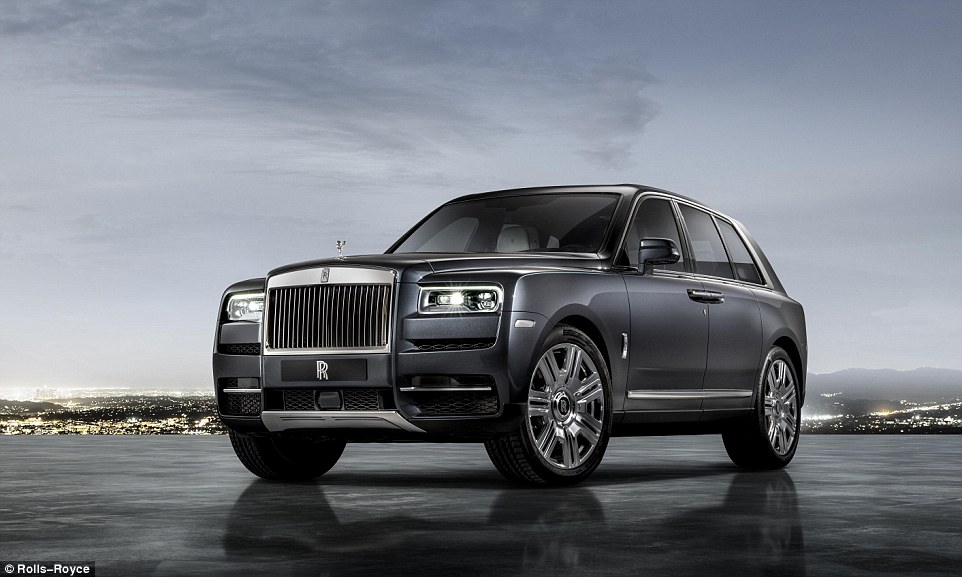 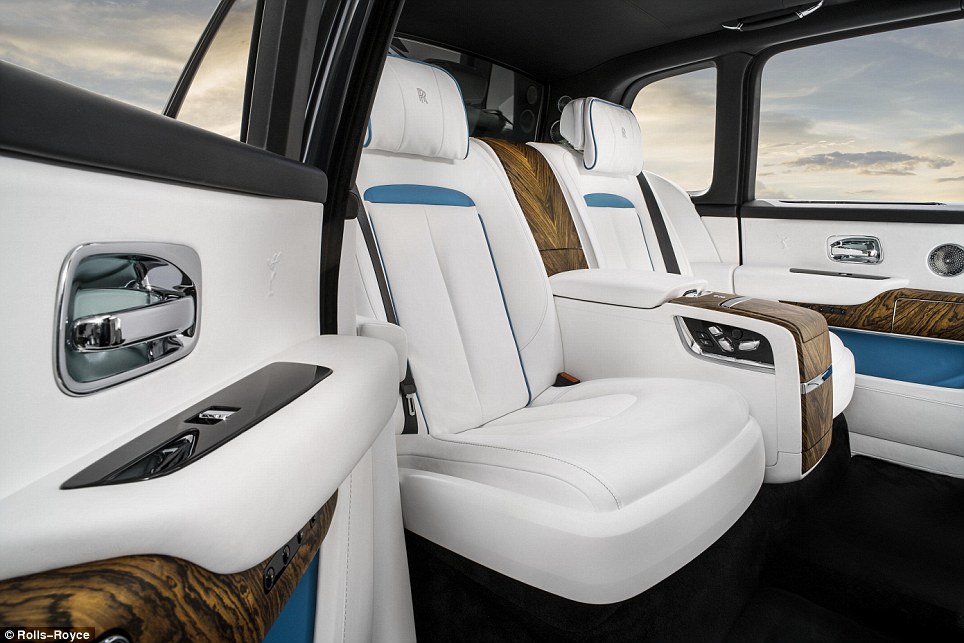 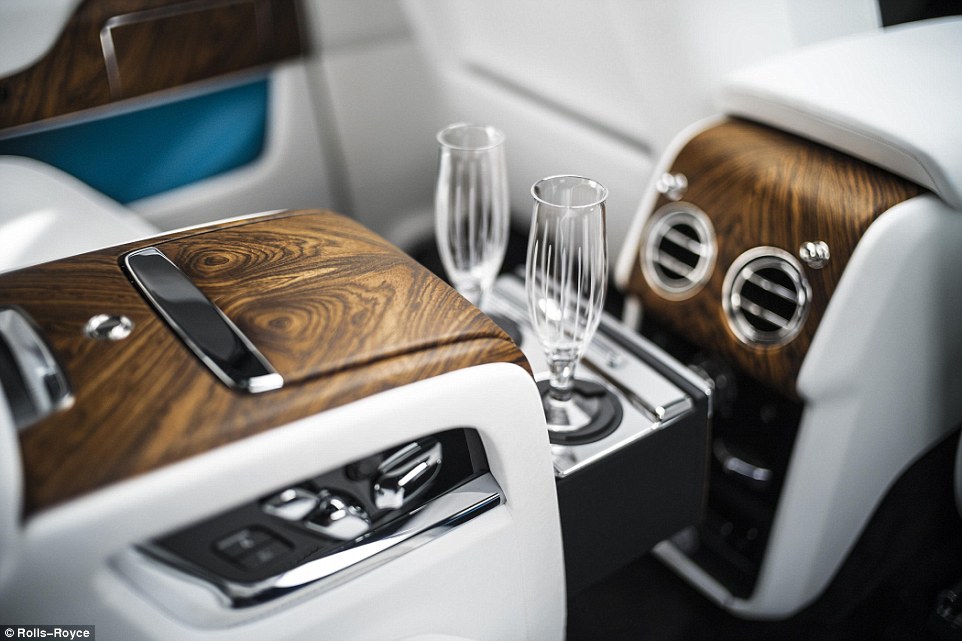 For those with bags of cash and a bevy of offspring, there’s a flexible five-seat model with a 600-litre boot that can be extended to 1930 litres with the second-row backrests folded flat.

And for VIPs, captains of industry and monarchs on the move, Rolls-Royce has created a statelier four-seater with two ‘pavilion’ chairs in the back.

These have been fixed in a raised grandstand position and the privacy side windows – inspired by those fitted to private jets – allow the chauffeured owner to wave to an adoring crowd if the event requires it or block them out for complete privacy.

And to ensure they’re relaxed at all times, the two executive airline-style rear seats flank a fixed centre console incorporating a drinks cabinet, Rolls-Royce whisky glasses and decanter, champagne flutes and a cool box to chill your bottles.

Even the rear seats have been angled slightly towards each other to allow the two rear occupants to talk to one another without straining their necks.

To make getting in and out of the high-riding car easier too, Cullinan can curtsy by lowering 40mm (one-and-a-half inches) when the driver clicks the unlock button or touches the door handle sensor for keyless entry. It then rises back up when the vehicle’s ‘Start’ button is pressed.

To protect skirts and trouser legs from getting dirty when getting in and out of the giant off-roader, the front and rear coach doors wrap low under the sill to ensure dirt remains on the outside of the door, not on the inner sill itself and in touching distance of fine garments. 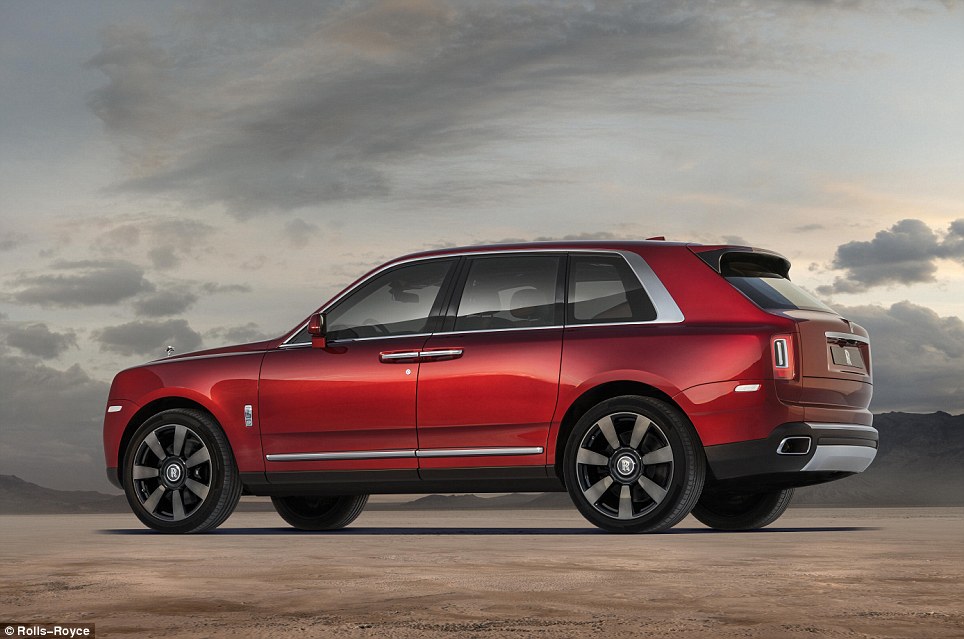 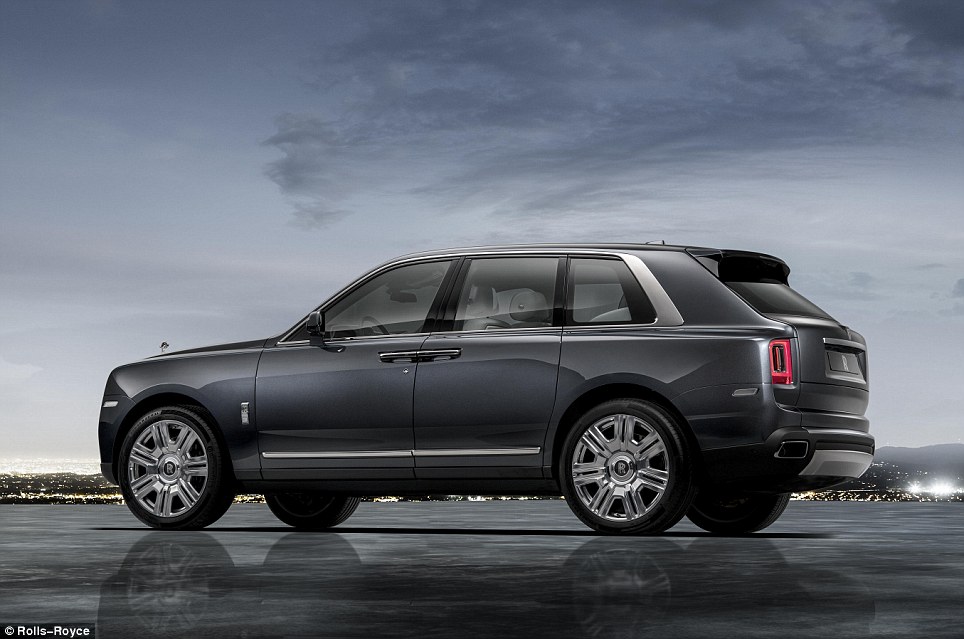 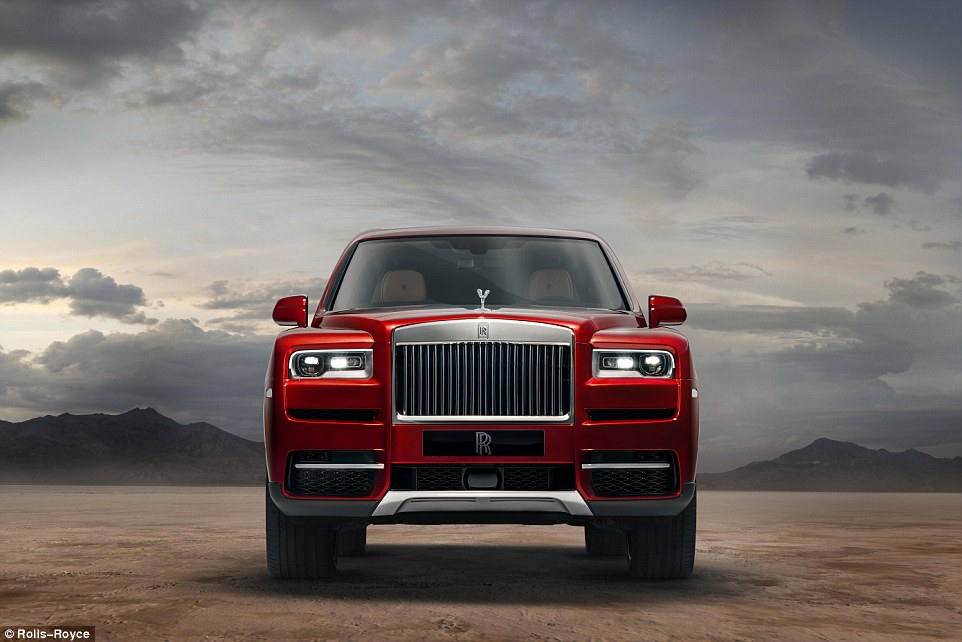 One of the most-selected options is likely to be the pop-out ‘viewing suite’ in the boot.

Two chairs and a table emerge from beneath the boot floor at the push of a button to offer the best seats in the house for those attending the races, polo or school sports days. There are also screens just in case you want to catch up on your favourite shows while under the cover of a boot lid.

And just like the rival Bentley Bentayga, Rolls-Royce will even handcraft special modules and suites for the boot along with bespoke equipment hampers for whatever leisure activity you enjoy most, be it fly-fishing, shooting, rock-climbing, snow-boarding, falconry, drone-racing or photography.

Despite stretching some 17 feet and six inches in length, six feet high, and weighing more than 2.6 tons, it won’t be a slouch.

That’s because it’s powered by a 6.75-litre twin-turbo V12 engine developing 563bhp – equivalent to around six Ford Fiestas – that can propel it from rest to 62mph in five seconds.

Foot to the floor and completely flat out, this breeze-block on wheels has a top speed that’s electronically limited to 155mph.

And it should even be usable when owners return to the city from a weekend of tackling mountain sides and sand dunes as it has a relatively nimble turning circle of 13.23 metres. 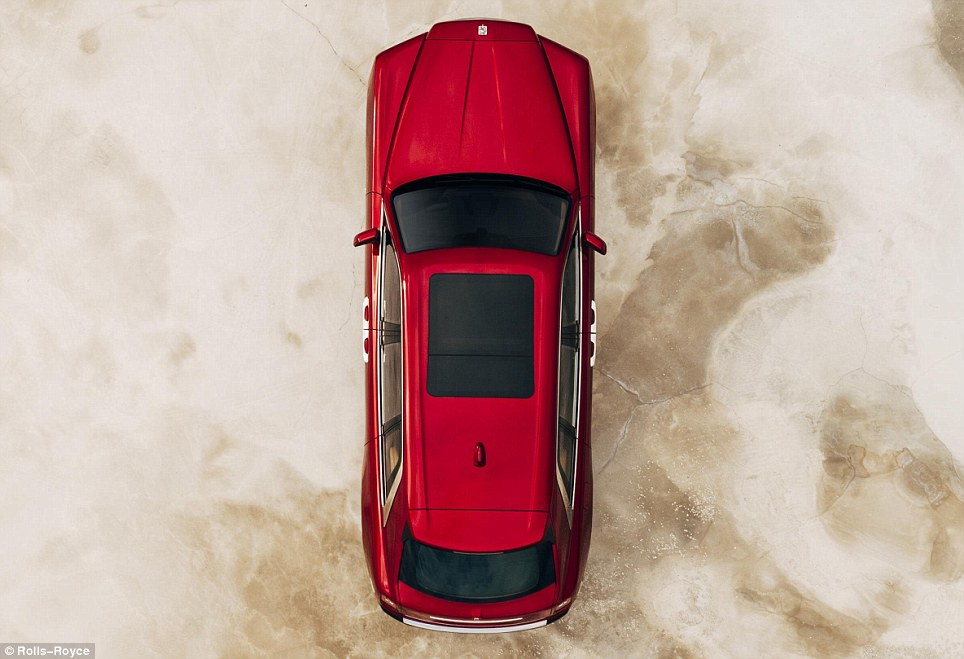 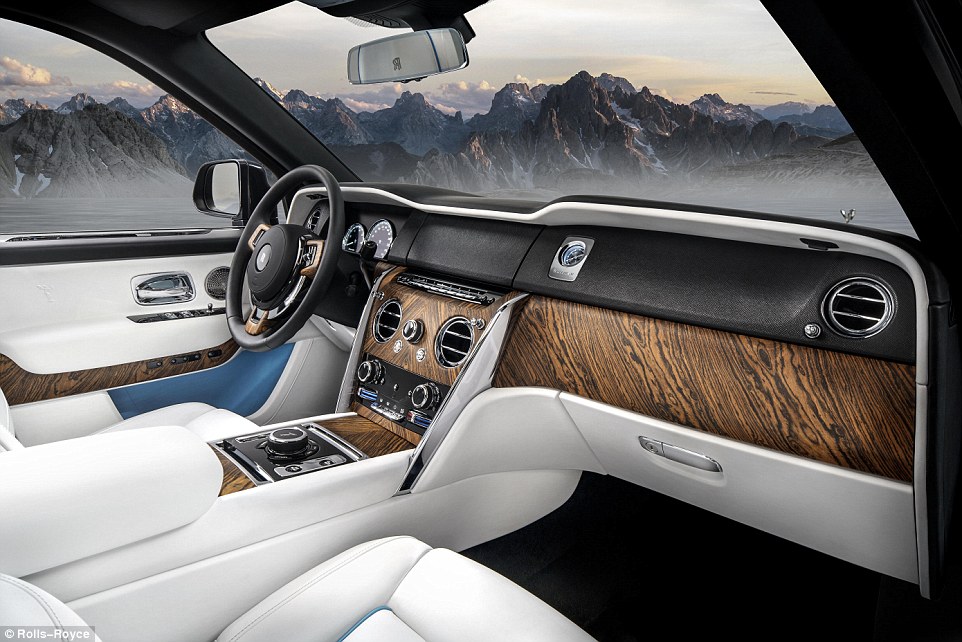 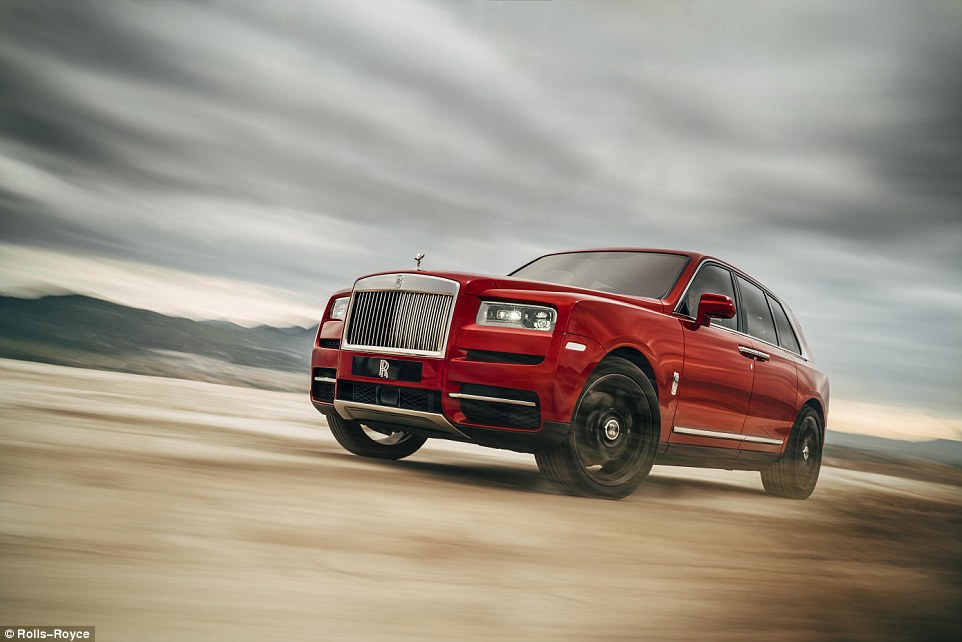 Gadgetry prepares the suspension for any potholes ahead, with a stereo camera system integrated into windscreen that reads the asphalt for bumps and craters and makes adjustments to the chassis so the biggest ripple in the tarmac can’t be felt by those inside.

Sat-nav aided transmission linked to the eight-speed automatic gearbox also prepares the car in advance for upcoming bends so no lurches or surges are experienced by passengers when the driver shifts through the gears.

To hone its composure on all terrains, Rolls-Royce has put it through its paces on the sands of Africa and the Middle East, the canyons and the mountains of North America, the frozen snow and ice of the Arctic Circle, and the rugged glens of Highlands of Scotland. 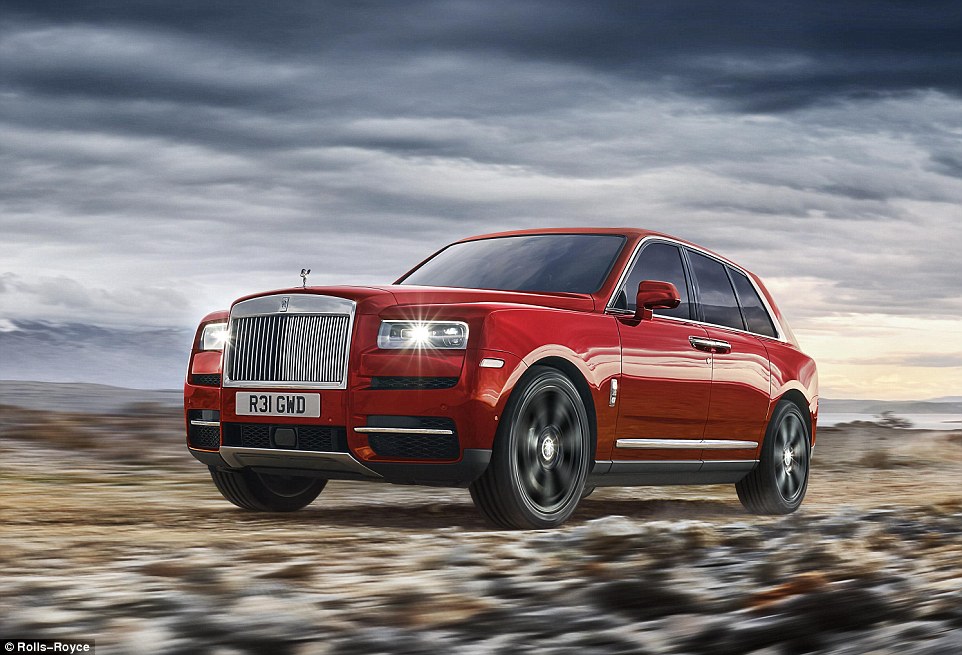 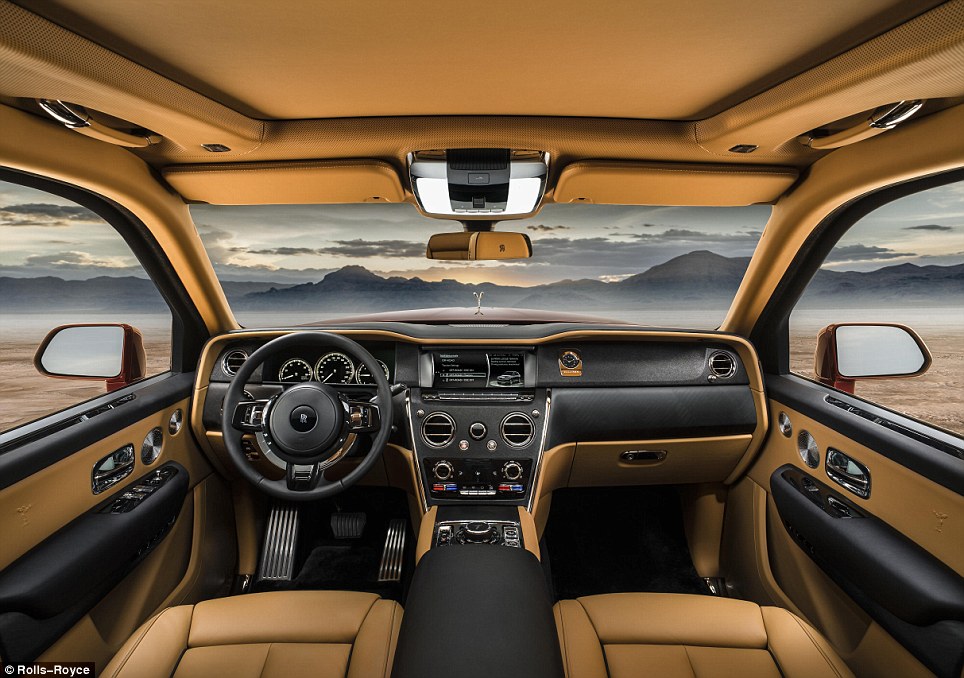 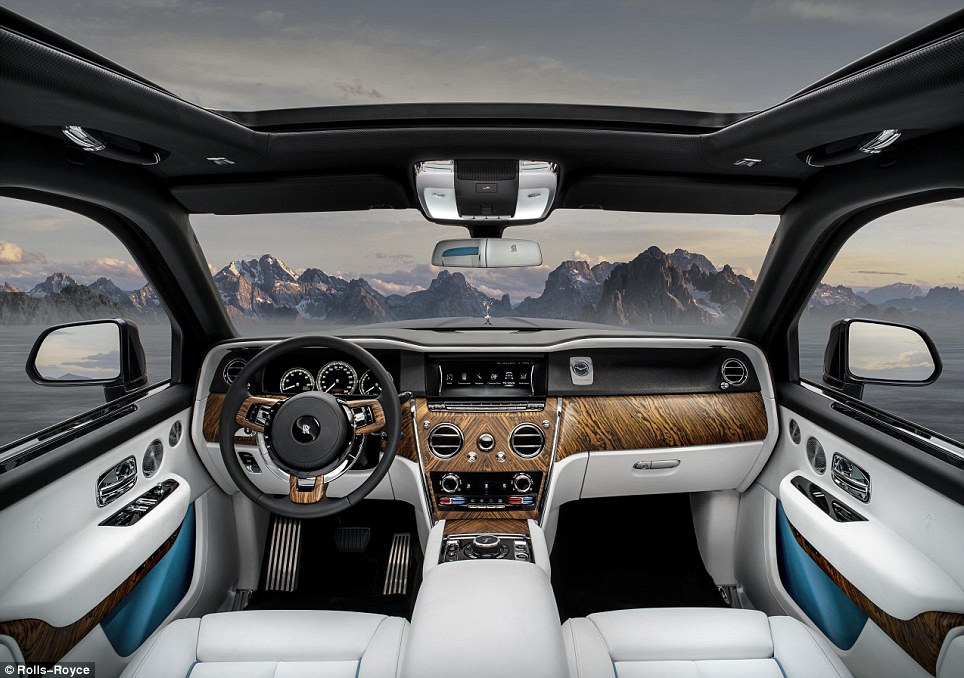 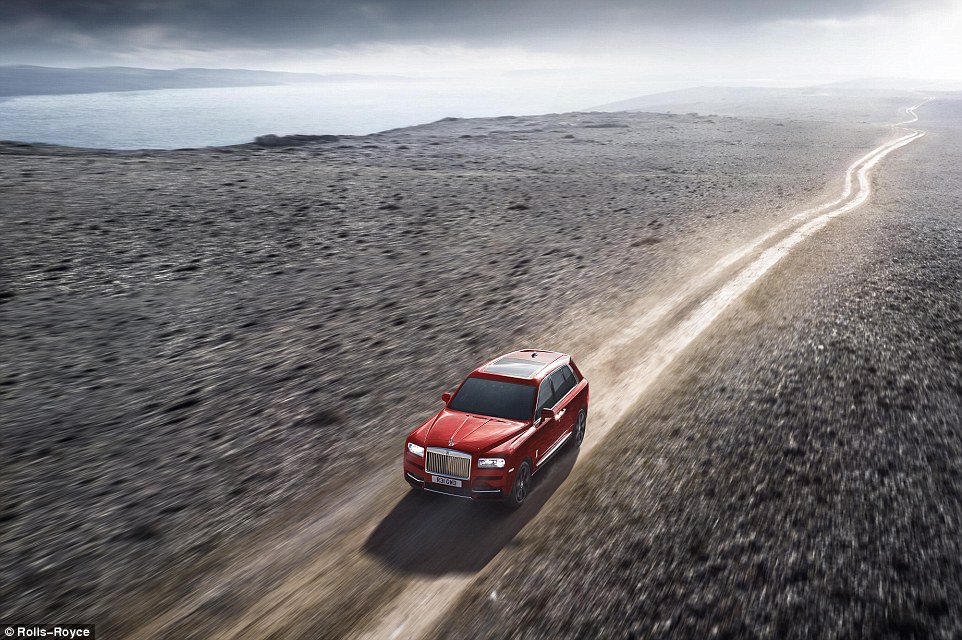 To ford streams it even has a wading depth of 21.2 inches (540mm), though that’s less than the 900mm boasted by the Land Rover Discovery.

Flood-friendly SUV: To ford streams it even has a wading depth of 21.2 inches (540mm), though that’s less than the 900mm boasted by the Land Rover Discovery 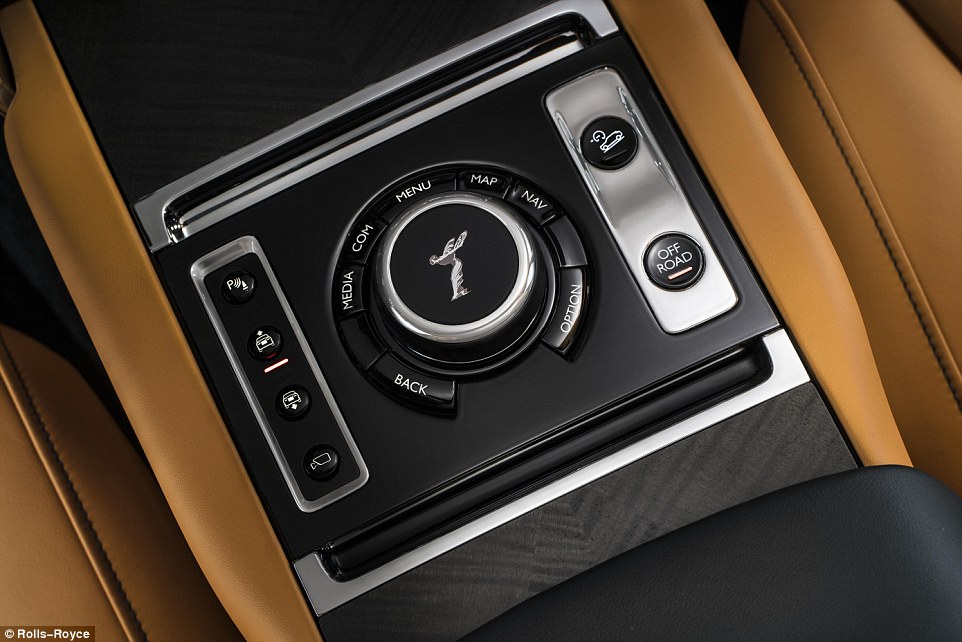 Will it fit in my garage?

Doors: 4 (plus rear tailgate) – rear coach doors open outwards from hinges at the back

Boot volume: 600 litres (with privacy glass cover removed) and up to 1930 litres with rear seats folded down

Inside Cullinan, the driver enjoys a hand-crafted luxury cockpit-style dashboard with digital dials and entirely metal or glass switches, including the centre console panel that houses the Spirit of Ecstasy controller dial, an ‘Everywhere’ off-road terrain button, a hill descent control switch and a touch-sensitive central information screen.

For the utmost comfort, the seats are all heated, as are the arm-rests and the centre console lid.

It’s crammed with more useful and practical tech too.

There are five USB ports, an in-car Wi-Fi hotspot and wireless charging for phones at the front.

There is also a high-resolution head-up display equipped with the latest navigation and entertainment systems.