- Advertisement -
Saudi Arabian Airlines (also known as Saudia), the national carrier of Saudi Arabia, has warned passengers about the way they dress, stating that those who are “clothed in a manner that would cause discomfort or offense to other passengers” could be denied boarding.
The restrictions apply to “women exposing legs or arms, or wearing too thin or too tight clothes and men wearing shorts exposing legs” as well as passengers who are barefoot, the airline’s website states.

The dress code, which has provoked outrage on social media, is refered to within a list of rules about passengers’ code of conduct on the website.

A seperate page of the website, written in English and created to draw attention to the carrier’s dress code, today appeared to have been taken down, following a flurry of criticism on Twitter.
Saudia has yet to confirm whether these requirements apply to all passengers across all classes on the plane, from business travellers to children and babies, or whether male passengers would also be refused boarding if they wear clothes that are too thin or tight or expose their arms. It has yet to clarify how the dress code will be enforced during the flight and what might be the consequences for any passengers who remove any clothing that would expose their arms and legs during the flight.

It has also yet to confirm when the dress code was issued and why it was imposed at all.

Saudi Arabia’s former head of tourism and health, Ali Al Ghamdi, claimed Saudia’s dress requirements were not exclusive to the carrier but were issued by the International Air Transport Association (IATA), and enforced in varying degrees by different airlines.

But IATA has denied those claims. “Reports in the media that IATA issues guidelines on dress code are incorrect. Dress code policy is entirely at the discretion of the airline,” a spokesperson for IATA said.

Saudia states that it “takes all the measures it possibly can to maximise passengers’ comfort and convenience” and its website advises passengers to “wear comfortable clothes when you travel. Tight-fitting clothes may naturally cause some discomfort and it is advisable to wear loose-fitting clothes instead.”

Saudi Arabian Airlines, which launched more than 70 years ago, operates flights from London Heathrow to Jeddah, Riyadh and Yanbu. Earlier this year, it was named the ‘World’s Most Improved Airline’ at Skytrax’s annual World Airline Awards, ranked 51st (up from 82nd last year) among the world’s best airlines.

The airline previously came under fire in 2015, when it denied claims that it was considering enforcing a gender split on its flights after it reportedly received complaints from male passengers who were unhappy about other men sitting next to their wives and female family members, and a complaint about a flight attendant being too ‘flirty’.

“We would like to emphasize that no Saudia official has made any statement on gender segregation,” the airline said in an official statement at the time.

The dress code has sparked debate on social media, with mixed responses, including strong criticism, including one user on Twitter who posted “Passengers to be subjected to Islamic air control? We want to travel, not be subjugated by religion”. Another user disagreed however, hailing the dress code as a “good step indeed”.

“#SaudiaAirlines enforcing a dress code?!? Wow you’d never get that in somewhere like #France #Women can wear whatever they want…,” one user posted, while another added: “Nudity does not cause me any offence and/or discomfort so is that acceptable?”

Other responses were humorous. 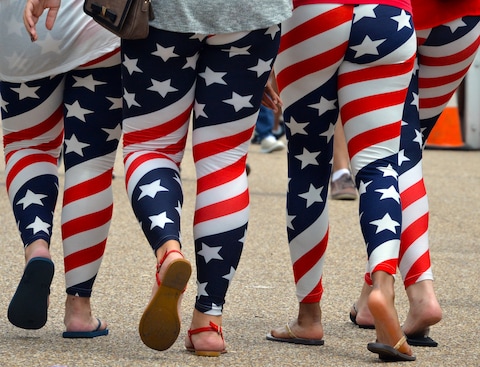 Twitter users accused the company of “policing” women’s clothing but United insisted they were simply enforcing an existing policy on dress codes for people, such as the girls, who were travelling on “buddy passes” that allow discounted travel for friends and family of employees.

Last year, Air France stewardesses were furious after being told to wear headscarves in Tehran, the capital of the Iran, to cover their hair once they disembarked.