JEDDAH: The high-speed Haramain train’s importance to Saudi Arabia has been highlighted with an announcement by King Salman that he will rely on the super-fast service for his next visit to Madinah.

The city’s governor, Prince Faisal bin Salman, expressed his appreciation to the Saudi ruler for his support of public transport in the Kingdom, and especially for the high-speed Haramain train.

The project is part of the Kingdom’s role in serving pilgrims to the Grand Mosque in Makkah and the visitors to the Prophet’s Mosque.
Prince Faisal used the high-speed rail for the journey to Friday prayers at the Grand Mosque of Makkah.

“The Custodian of the Two Holy Mosques, King Salman, has informed me of his intention to take the Haramain high-speed rail soon when he visits Madinah or departs from it to Makkah,” Prince Faisal said.

Prince Faisal highlighted the importance of the project linking Makkah and Madinah through Jeddah and King Abdullah Economic City in Rabigh in light of efforts to receive 30 million pilgrims as part of Vision 2030 program to diversify revenues.

He said the Haramain high-speed rail link was among the safest and most important transportation services in the world. The rail service will enhance the flow of visitors to the Two Holy Mosques through the link between the two holy cities.

The Madinah governor expressed confidence in the performance of the Saudi youth and the services they provide at the stations.

“What I saw invites me to register my honor and pride in the significant role played by young men and women in all stages of the development, including their effective contribution and participation in establishing and implementing the high-speed rail.”

Al-Amoudi said the support of Prince Faisal had made it easier to meet the challenges faced by work teams building the Haramain station in Madinah and the related phases within the time frame of the project. 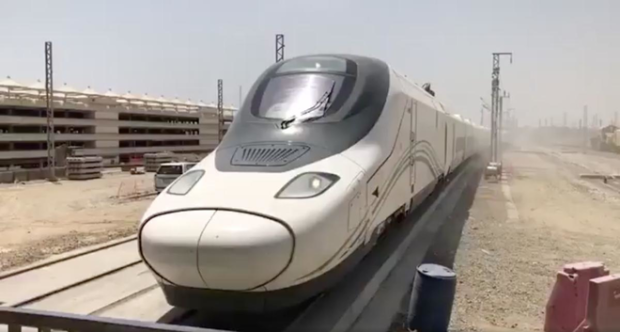 He said the SR60 billion ($16 billion) high-speed train is on track to be fully operational this year.

Al-Amoudi said the pilot operation has been going to plan since the end of 2017. Project supervisors have organized regular trips in which a large number of governmental, non-governmental and charitable bodies have participated.

He said the PTA was focused on taking transport in the Kingdom to another level, guaranteeing opportunities for nationalization and thus achieving the Kingdom’s Vision 2030.

The Haramain train station was proof of the Kingdom’s competence in achieving such projects, he said.

The Haramain service is one of the biggest public transport projects in the Middle East, a 450-kilometer, two-way electric train linking Makkah and Madinah, with extensions to Jeddah and King Abdullah Economic City.

The project will carry 60 million passengers a year on 35 trains, with a seating capacity of 417 per train and traveling at a speed of 300 kph.

The station is about three kilometers from the Grand Mosque in Makkah, while the Madinah station is located in the Knowledge Economic City on King Abdul Aziz Road.

Expat workers at Jeddah airport to be replaced with Saudis