A Saudi man who allegedly filmed himself killing cats on Snapchat has been arrested, local media reported Thursday.

The arrest followed a social media outcry over the footage, which appeared to show a number of cats being shot. One video, which was uploaded to Snapchat and later spread further on Twitter and YouTube this week, showed a man in a car in Jiddah using a rifle to shoot a cat as it drank from a bowl of water.

The video shows the cat writhing in pain before growing still. The alleged killer, who used a Snapchat filter to make himself look like a cat and modified his voice, mocked those who left out food and water for stray cats and blamed the cats for damage to his car. “For those who feel sorry for the cats, give me the money for four carwashes a week,” the man said.

The footage sparked an angry backlash from Saudi social media users. Services like Snapchat and Twitter are extremely popular in Saudi Arabia — just last month, a video of a woman in a skirt prompted a bitter debate on Twitter about the country’s strict Islamic dress rules.

But if that case showed Saudi Arabia’s divisions, this new video prompted near universal condemnation — with many both inside the country and elsewhere using the hashtag نريد_محاسبه_سفاح_القطط that demanded that the man in the video be held accountable for his acts.

Following the anger on social media this week, Saudi authorities stepped in. Under Saudi law, the man might face a fine of up to 400,000 riyals (roughly $107,000). On Wednesday, the Saudi Ministry of Environment, Water and Agriculture issued a statement that criticized the “disgraceful act” and said that it went against both the teachings of Islam and the laws of the Saudi kingdom. 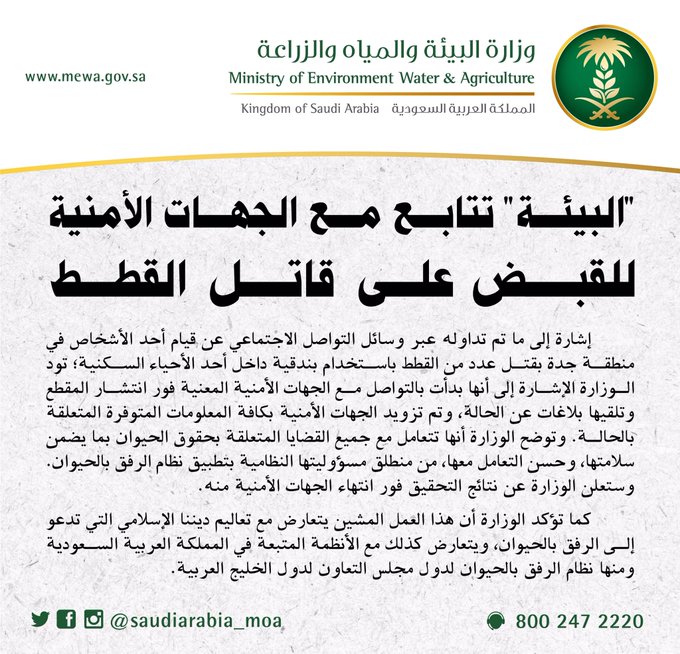 There was soon a police hunt for the alleged killer. According to the English-language Arab News newspaper, police in Mecca province (which includes Jiddah) say that the 31-year-old suspect was arrested by airport police Thursday and is facing the appropriate charges.

However, some social media users suggested that the official punishment wouldn’t be strong enough.

#نريد_محاسبه_سفاح_القطط He deserves an execution not a 400 thousand penalty!