Home GCC Countries Saudi Arabia Saudi first: Spokeswoman at KSA embassy in US
Share on Facebook
Tweet on Twitter
- Advertisement -
WASHINGTON (AP) – As Saudi Arabia feverishly portrays itself as ready to join the ranks of modern, tolerant societies, the kingdom has turned to a once-unlikely messenger – one of its daughters – to make its case to the West.

On Fatimah Baeshen’s first day as the Saudi Embassy in Washington’s official spokeswoman, the ultra-conservative nation’s rulers issued a decree to lift its ban on women driving, starting next summer. It was a step toward erasing what much of the world sees as a stain on Saudi Arabia’s women’s rights record. Activists are pushing for greater human rights and political freedoms, even with the recent openings for women.

Baeshen, the first woman named to the embassy post, is no stranger to life behind the wheel of a car. The Saudi-born Baeshen spent years living, working and studying in the United States, affording an easy fluency in the routines of American life that many Westerners see as irreconcilable with the country she represents. 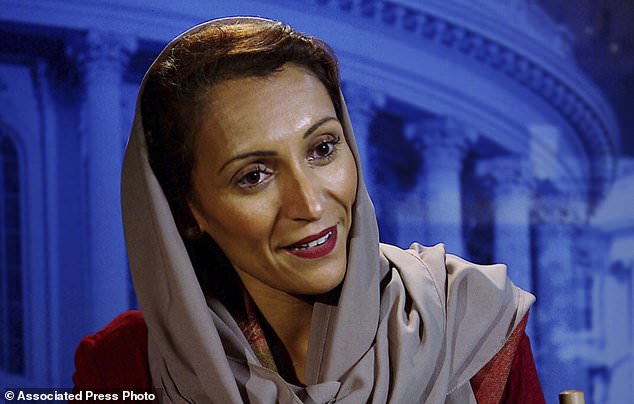 In this image from video, Fatimah Baeshen, the spokeswoman for the Saudi Arabia Embassy in Washington, speaks during an Associated Press interview. As Saudi Arabia works feverishly to portray itself as ready to join the ranks of modern, tolerant societies, the kingdom has turned to a once-unimaginable face to make its case to the West: one of its daughters. (AP Photo)

“I’m a byproduct of the longstanding Saudi-U.S. relationship,” Baeshen said in an Associated Press interview. “For years, Saudi students have been coming to the United States to study. There are several Saudis that are like me, that are very comfortable and are able to fluidly go back and forth between cultures.”

For Saudi Arabia, Baeshen’s appointment reflects an opportunity to try to revise a narrative that is sharply at odds with the kingdom’s ambitious plan to transform itself for the future. In addition to sweeping economic changes, “Vision 2030” calls for easing social restrictions as a younger generation prepares to take the helm.

The kingdom’s Gulf Arab neighbors have sprinted toward modernity in recent years, building flashy skyscrapers and attracting foreign tourists, but Saudi Arabia’s economic development has lagged. Though the U.S. prizes the close security alliance, Saudi Arabia’s restrictive freedoms, its conservative religious clergy and its human rights record made it difficult for two countries to claim they had much in common culturally.

Now Saudi Arabia is under de facto control of young Crown Prince Mohammed bin Salman, or MBS, as he’s known in foreign capitals. The 32-year-old is in line to inherit the throne from his father, King Salman, and is behind ambitious goals to create more jobs for young Saudis, bolster tourism and ease a historic overreliance on oil revenues after a drop in prices plunged the country into deficit.

The economic overhaul also means bringing more Saudi women into the workforce, with an eye toward creating more two-income households and weaning Saudis off of reliance on government perks. The official plan calls for increasing female participation from 22 percent to 30 percent.

As the kingdom works on domestic reforms, a concerted effort is underway to tell its story more proactively in the West. Its embassy in Washington, considered by many Saudi officials to be their most important overseas post, has stepped up messaging with more social media engagement. The kingdom has spent millions on an aggressive lobbying and public relations campaign targeting Capitol Hill and the American media.

Polished and relaxed, Baeshen is a quick defender of her country’s progress, even when faced with sensitive questions. She said gender played no role in her selection. In a recent cable news appearance, she interjected to forcefully challenge several points when the host ticked through a litany of critiques of how Saudi Arabia treats women.

“Women across the board deal with different issues, regardless of where they are,” Baeshen told the AP. She said the driving issue shouldn’t obscure the fact that Saudi women have been productive members of society for decades. “The myopic focus of this element I think deters the larger perception of what Saudi women have really been able to contribute.”

After attending the University of Massachusetts, Amherst, she wrote a thesis on Islamic financial regulation in secular markets while a graduate student at the University of Chicago. She worked in the Saudi Ministry of Labor and at the World Bank before joining the embassy.

As a director at the Arabia Foundation, a pro-Saudi research center, she wrote in Time Magazine earlier this year: “The change-through-confrontation approach is counterproductive to achieving our collective goal; force is too often met with the strongest of cultural resistance.”

Saudi women’s rights advocates are hoping the next barrier to fall will be the guardianship system that requires a male relative’s approval for a woman to travel abroad, marry, obtain a passport and undergo certain medical procedures. Baeshen pointed out that King Salman has issued a decree to review how the guardianship system is applied, though it’s unclear if the rules will be eased.

“Empowerment is about access, choice and control. Saudi Arabia has made tangible strides in the spheres of access and choice,” Baeshen said. “There are elements to be improved with respect to control.”