A rare interview given by a top Israeli general to a Saudi-owned news site has raised speculation of joint military action against Iran and its allies, but analysts say it appears unlikely.

Though Saudi Arabia and Israel have no official diplomatic ties, they share a common enemy in Tehran, with both seeking to limit the Islamic republic’s expanding influence in the Middle East.

Tensions between the Saudis and Iran have intensified in recent weeks, with Riyadh-backed Lebanese Prime Minister Saad Hariri stepping down over what he called Iran’s grip on his country.

Iranian-backed Hezbollah, which is dominant in Lebanon, is also a great enemy of Israel — with which it fought a war in 2006.

Hezbollah and Iran have accused Saudi Arabia of pressing Israel to launch attacks against Hezbollah in Lebanon.

Saudi Arabia has also accused Iran of meddling in Yemen by supporting Huthi rebels against the Riyadh-backed government.

In this context, comments by Israel’s military chief of staff Gadi Eisenkot to Elaph, a British-based news website founded by a Saudi businessman, caused a stir on Thursday.

Eisenkot said Israel and Saudi were in “total agreement” that Iran was the greatest threat to the Middle East, adding that the Jewish state was “ready to exchange experience with the moderate Arab countries and exchange intelligence information to face Iran.”

Eisenkot pointed out that while Saudi Arabia and Israel had no formal relations, the two states had never directly been to war.

Speculation about a formal Israeli-Saudi alliance has been fuelled by the election of US President Donald Trump, a vociferous critic of Iran.

The rise to power of Saudi Crown Prince Mohammed bin Salman has also led to a more forthright policy, as he looks to militarily confront what he sees as Iranian influence across the region, including in Yemen.

Trump’s first foreign trip took in Riyadh and Israel and his son-in-law and adviser Jared Kushner has reportedly formed a bond with Prince Mohammed.

Israeli Prime Minister Benjamin Netanyahu has also spoken repeatedly and with pride about growing rapprochement with “moderate Arab states” without naming them, although he is assumed to be referring to Saudi Arabia and other Gulf monarchies.

Israel has been alarmed by Iran’s nuclear activities and the danger that Tehran, militarily engaged in Syria, will establish a new front near Israeli borders.

The Jewish state closely monitors the demarcation lines with Syria and Lebanon, beyond which Hezbollah is located. 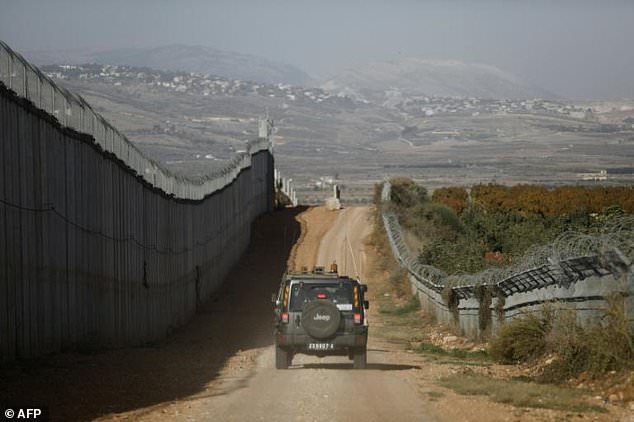 An Israeli army vehicle drives along the border fence between Lebanon and Israel near the northern Israeli town of Metula on November 16, 2017

On Thursday, from a vantage point near Metula, the northernmost Israeli town flanked by Lebanon on three sides, an Israeli tank’s cannon tracked to and fro.

“Hezbollah is here, we see it and its activities day and night,” Lieutenant Colonel Elad Efrati, who commands a battalion guarding the northernmost 25 kilometres of the frontier, told AFP.

“The relative quiet here is deceptive. On the other side Hezbollah and the Lebanese army are gathering information on our forces non-stop.”

“This relative quiet could shatter in an instant.”

But Eisenkot said Israel had no intention of “initiating” a conflict with Hezbollah.

Analysts agreed that while there was no Israeli willingness for a new war, in such a volatile region, events can quickly spiral out of control.

“For many years now Saudi Arabia and Israel have found themselves figuratively in the same trench versus Iran,” said Joshua Teitelbaum, of Israel’s Begin-Sadat Centre for Strategic Studies.

“But now that the conflict has been dialled up Israel is trying not to be pulled in. It needs to operate on its own terms.

“Israel will not be dragged into a war on behalf of Saudi Arabia.”

Writing in Israel’s Haaretz newspaper, defence correspondent Amos Harel warned that in the complex dance of military and diplomatic brinksmanship, accidents can happen.

“Vigorous Saudi actions are fuelling tensions in an arena where Israel and Hezbollah are often only two mutual missteps away from war.”

Karim Bitar of the Paris-based Institute of International and Strategic Affairs took a similar view.

“There is a combination of very disturbing factors,” he said. “We have Saudi impulsivity backed by an American president who is equally impulsive.”

Harel wrote that twice in the past Riyadh had counted on Israeli military action, first hoping it would hit Iran’s nuclear sites and then wanting intervention against the forces of Assad.

“Both times it was disappointed,” he said.