- Advertisement -
Saudi Arabia is starting to ease restrictions on women spectators in sports stadiums.
Starting in early 2018, women will be allowed into three arenas in major cities, according to a statement issued Sunday by the General Sport Authority, the country’s governing body for sports.
The previously male-only venues of King Fahd Stadium in Riyadh, King Abdullah Sport City in Jeddah, and Prince Mohammed Bin Fahd Stadium in Dammam will begin preparations to “accommodate families,” the statement said. Specific seating arrangements are unclear at the moment; Saudi men and women are customarily separated in places where they are both allowed.
The country has several stadiums ranging in size, but the government appears to have chosen the biggest and most important. The stadiums are home to six teams in the Saudi Professional League — the top division — and two of the three stadiums included have the highest seating capacity in the kingdom.
The change is the latest to give women more freedom following a historic decree in September allowing them to drive. 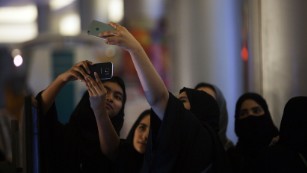 The conservative kingdom adheres to some of the strictest interpretations of Sunni Islam in the world. Under its guardianship system, women cannot marry, divorce, travel, get a job or have elective surgery without permission from their male guardians. They cannot mix freely with members of the opposite sex, and must wear a full-length black abaya in public.
Some of that is starting to change.
The move to open stadiums is the latest of 32-year-old Crown Prince Mohammed bin Salman’s ambitious reforms, as laid out in his “vision for 2030” plan.
The plan for the country’s economic reinvention rests on a number of pillars, including youth empowerment, social organization and women’s empowerment. The kingdom wants to increase participation of women in the Saudi labor market and and other aspects of life.
Also, for the first time ever in September, women were allowed to enter King Fahd Stadium for a celebration commemorating the kingdom’s 87th anniversary. They were seated in a specific section for families. Though welcomed by many, the move drew backlash from conservatives holding on to the country’s strict gender segregation rules.
Source – CNN