A nurse was repeatedly stabbed in the arm by a Saudi man who became enraged after being refused medication.

Rolando Mina, 29, had been filling out paperwork at a reception desk at a hospital in Madinah, Saudi Arabia on May 17.

The 23-year-old suspect approached the nurse’s desk and grappled with Rolando before plunging a knife into his left forearm as he tries to defend himself. Terrified Rolando blocks the knife but the man returns and plunges the weapon once into his right arm. The nurse is treated seconds after the attack. 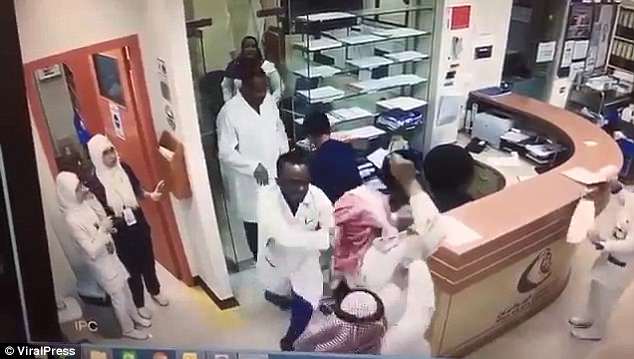 He said: ‘I was shocked at first. I thought he was only punching me so my instinct was to block it. It was only after that I felt the pain, saw the blood and realised the man had a knife. I’m thankful to my colleagues for coming to my assistance.’

Police arrested the alleged attacker who told officers he became angry after Rolando, an overseas worker from the Philippines, refused to give him medicine without a prescription.

Rolando said it was the hospital’s policy to only hand out tablets with written confirmation from a doctor.

Jeddah Edgar Badajos, the Consul General of the Philippine Consulate General in Jeddah, said the Arab man had been remanded in custody while the attack is investigated.

He said: ‘The man is already in jail and the case investigation is ongoing. Our health workers should not worry because it is an isolated case.’

Meet Filipino nanny who was gifted a house by Emirati employer

Dubai maid’s employers fly home with her for vacation