- Advertisement -
Manal Al-Sharif has opened up about her being jailed after she defied Saudi Arabia’s female driving ban.

She spent nine days behind bars after being charged with ‘driving while female’ after she uploaded a YouTube video of herself travelling through the streets of Khobar in May 2011.

Saudi Arabia is the only country in the world that forbids women from driving – but the ban did not deter the now 38-year-old from taking back control over her life.

However, the protest that gained global attention came with consequences.

Speaking to Daily Mail Australia, the doting mother-of-two shared her heartbreak of having to live in two worlds after losing custody over her son, now aged 11. 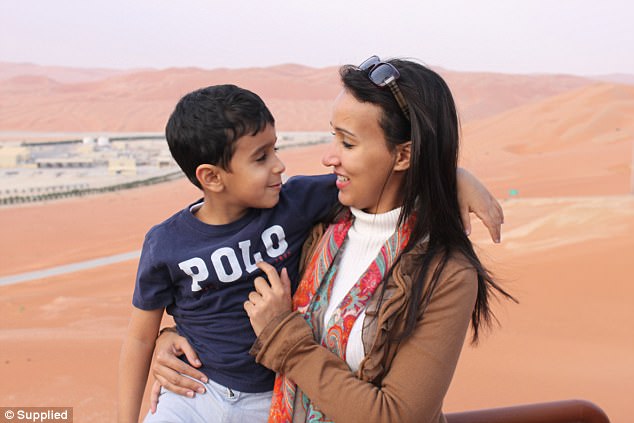 The mother pictured with her son Aboudi, now aged 11, who she lost custody over 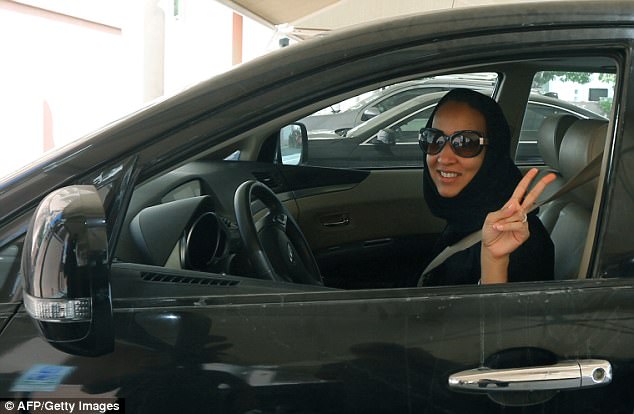 Smiling at the cameras as she droves her car in the Gulf Emirate city on October 22, 2013, in solidarity with Saudi women preparing to take to the wheel on October 26, defying the Saudi authorities, to campaign women’s right to drive in Saudi Arabia
I was jailed because I challenged the ban,’ she said. ‘I lost custody of my son, my job and my home but I just have to accept the consequences otherwise women don’t move forward.

‘I’ve done a lot of things in my life I regret but I didn’t choose to be arrested for driving. I was tired of accepting these awkward rules so I wanted to prove a point.

‘When I was sitting in prison, the only regret I had was not being with my son at the time when he was in hospital.’

Ms Al-Sharif’s stunt followed more than 20 years after the first official protest that saw 47 women rallying behind the wheels to defy the ban on driving.

In 1990, the group of women wanted to prove they were competent enough to drive – but it wasn’t long until they were all arrested. 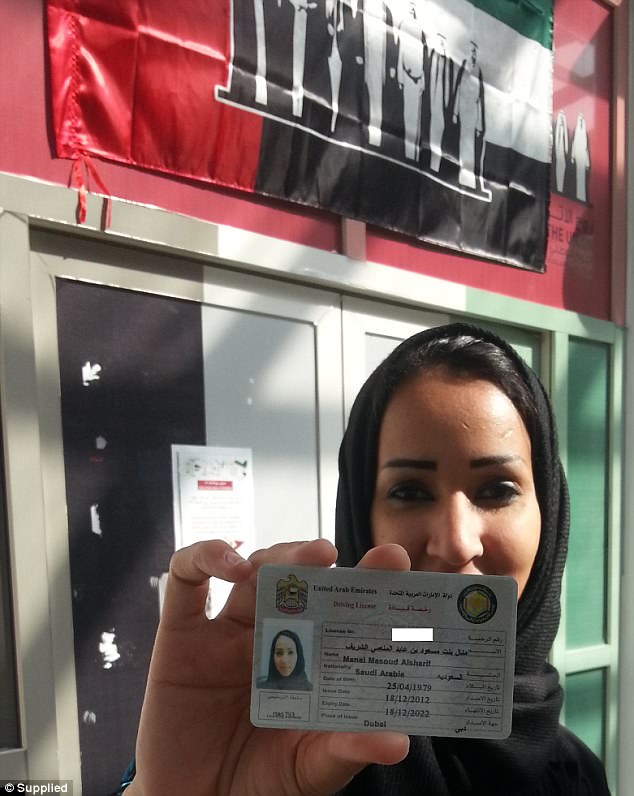 Showing off her United Arab Emirates driver’s license in 2012

‘History repeated itself,’ she said.

‘I remember the prison guard asking me why I was there. She heard about the movement but she just couldn’t believe they put me in jail for driving.

‘When I was in jail, I started to think that it happened for a reason and it really opened up eyes. The good news is the movement started a dialect.’ 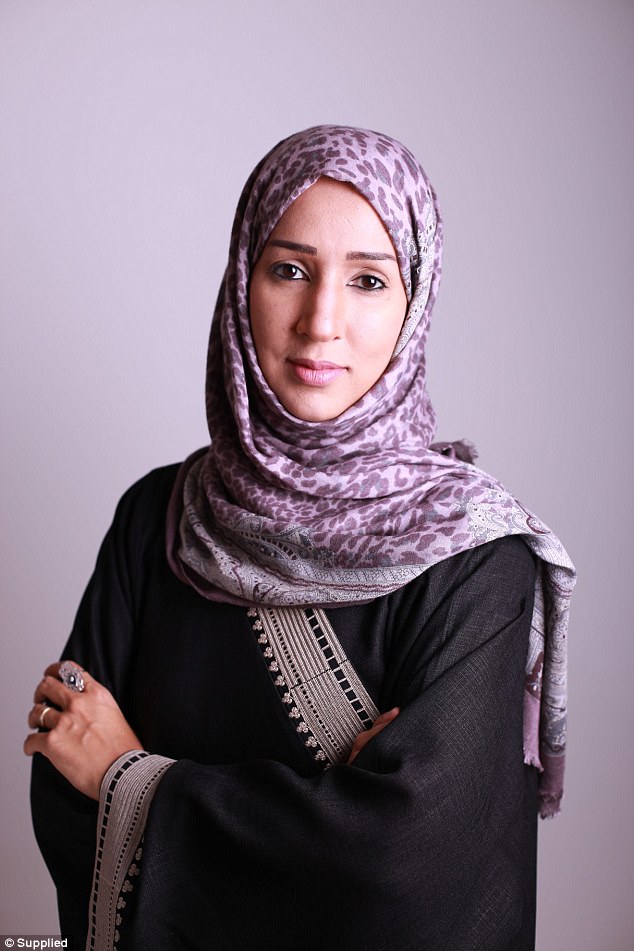 The mother said she was faced with relentless backlash after the video attracted more than 700,000 views within 24 hour.

‘The video was trending inside Saudi Arabia,’ she said.

‘I was getting phone calls, my family was receiving death threats and more girls were being discouraged to go out.

‘Driving a car as a woman, you really stir the whole country. I was called a w**** and people accused me of corrupting Muslims… They called me all kinds of names.

‘People were calling me crazy and saying I should be locked up in a mental hospital.’

But despite holding a driver’s license, Ms Al-Sharif said women were still not allowed to drive simply because they were ‘legally minors’ in the country. 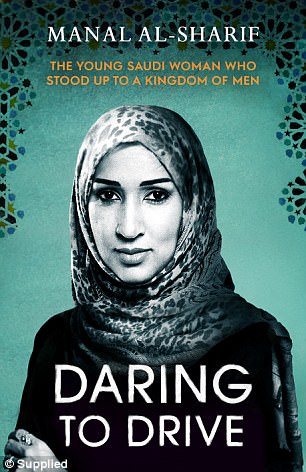 ‘It doesn’t matter if you’re a highly educated woman, you still need a male guardian to give you permission to do things,’ she explained.

‘I had to go to my father to get my passport.’

She explained the Saudi women were depicted as ‘queens’ so they were ‘protected by the kingdom of men’.

‘That’s why we can’t drive because we need male guidance to do anything on our behalf,’ she explained.

‘I come from a very private society where we live in closed windows, high walls and women are covered up. It’s very difficult for girls and women in Saudi Arabia to do anything without the permission from a male guardian.’

Ms Al-Sharif explained when she got married to her second husband, she needed to get permission from her father and a ‘special permission from the government’ because she wasn’t allowed to marry a non-Saudi man.

‘Until this day, I still didn’t get the second permission,’ she said.

‘We couldn’t get married in Dubai either because I wasn’t allowed to marry a non-Saudi without permission. We had to go through a civil marriage from a law court in Canada.’

Ms Al-Sharif has recently published her memoir called Daring To Drive, in which she writes: ‘I’m proud of my face. I will not cover it. If it bothers you, don’t look. If you are seduced by merely looking at it, that is your problem. You cannot punish me because you cannot control yourself.’

Ms Al-Sharif made a heartbreaking admission behind the inspiration to write her book.

‘The first thing that really inspired me to write was when I found out my son was being beaten in school,’ she said.

‘My son was six-years-old when I did the protest in 2011 so he didn’t understand what was going on. When we found out, we moved him to another school.
‘I started writing in Arabic. When I was writing, I was writing about the movement. But my agent said I needed to tell a personal story. It wasn’t an easy decision but I was able to write very intimate details about my life.

Ms Al-Sharif now lives in Australia as a permanent resident with her family – her second husband and youngest son Daniel Hamza, aged two, who has never met his 11-year-old half-brother Aboudi.

‘You go through the normal daily struggles, not the man made struggles you would in Saudi Arabia.

‘This week, I got my Australian driver’s license. I applied and got it. It was the best $300 I spent. I was so happy. It’s a liberating feeling.