WWE has come under fire for a lack of female wrestlers in its ‘Greatest Royal Rumble’ show taking place in Saudi Arabia.

In the 30 years that the Rumble events have been staged there has been a move to see female wrestlers headline shows.

But while there will be 50 men going to Saudi to take part in the ‘Greatest Royal Rumble’, being held at King Abdullah Sports City Jeddah, no women will be taking part.

The event is also only to be attended by families and men with women only allowed to watch the show if they are accompanied by a male relative.

Women once only had passive roles in wrestling but they have become much more well respected in recent years in a change that has been dubbed ‘Women’s Evolution’.

The absence of women drew fierce criticism on social media.

One user wrote: ‘Honestly, WWE chose money over their phenomenal women superstars. I’m hyped about #WWEGRR event but #SaudiArabia’s discrimination against women MUST END! Women ARE NOT inadequate to men.

Company executive and performer Triple H said that he hoped women will be taking part in the coming years. 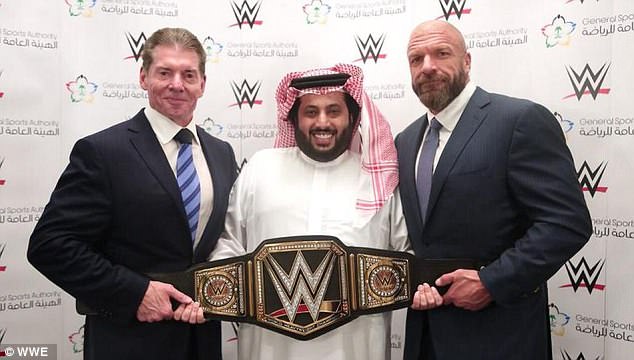 ‘You can’t dictate to a country or a religion about how they handle things but, having said that, WWE is at the forefront of a women’s evolution in the world and what you can’t do is affect change anywhere by staying away from it.

‘While, right now, women are not competing in the event, we have had discussions about that and we believe and hope that, in the next few years they will be.

‘The country is in the middle of a shift in how it is dealing with that – the position is changing, and rights are changing, as are the way women are handled and treated in society.

‘We think that’s a great thing and we’re excited to be at the forefront of that change.’

Measures include allowing women to drive for the first time and giving them the option to join the military.

There are still restrictions on women travelling without permission, or being accompanied, by a male guardian.

Saudi: Ramadan More Likely to be on Friday

Saudi: Travel Bans Extended As Cases Rise to Over 1,200