Huge swathes of Europeans believe Islam is ‘incompatible’ with their views and culture, a survey has shown.

Across 15 western European countries, researchers found that 42 per cent of the general population agreed with statement ‘Islam is fundamentally incompatible with our values and culture’.

Meanwhile, 17 per cent of Europeans said they would not be willing to accept a Jewish person as a family member. 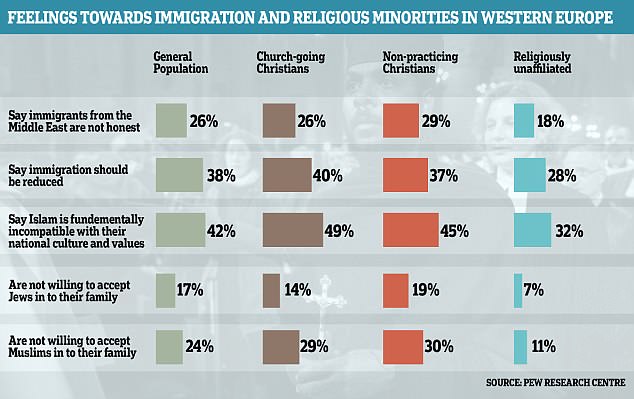 Researchers looked at political attitudes of Europeans broken down into practicing Christians, non-practicing and the non-religious. They found that 42 per cent of all Europeans feel Islam is fundamentally incompatible with their views and culture 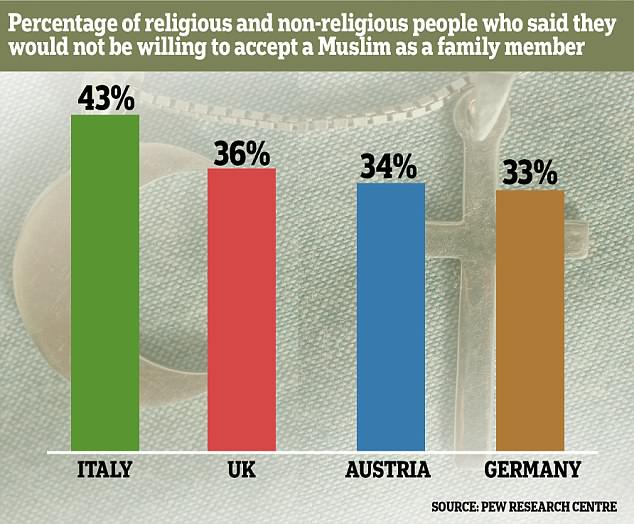 Across 15 European countries, researchers found high levels of anti-Muslim feeling. Here are the percentages of people in four nations who would not want a Muslim in their family

The study was carried out by the Pew Research Center and examined differing political attitudes between practicing Christians, non-practising Christians and the non-religious across Europe.

In total 25,000 people were polled between April and August in 2017. Practising Christian was defined as someone who attends church at least once a month.

While the research showed a majority of all groups were accepting of other cultures and religions, it also revealed that Christians – whether practising or non-practising – were less likely to be tolerant.

They also are more inclined to think their country’s culture and values are superior.

In Britain, researchers found that 45 percent of churchgoing Christians, 47 percent of non-practising Christians and 30 per cent of the non-religious agreed that ‘Islam is fundamentally incompatible with our values and culture’.

In France, nearly three-quarters of Christians who attend church, or 72 percent, agreed it was important to have French ancestry to be ‘truly French.’

Among non-practising Christians, 52 percent took this position, compared to 43 percent of those without religious affiliations.

‘On balance, more respondents say immigrants are honest and hardworking than say the opposite,’ the study’s authors wrote.

‘But a clear pattern emerges: Both church-attending and non-practicing Christians are more likely than religiously unaffiliated adults in Western Europe to voice anti-immigrant and anti-minority views.’ 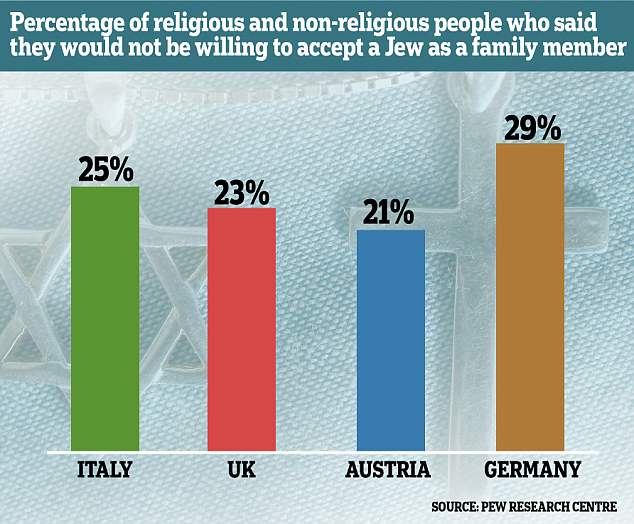 Anti-Jewish sentiment was also relatively high in Europe. Here are the percentages of each country, both religious and non-religious, who would not want a Jew joining their family

The survey also found a strong undercurrent of antisemitism in Europe, although anti-Muslim sentiment was higher in every one of the 15 countries surveyed.

The survey was conducted after more than 2.3million migrants and refugees had entered Europe, according to the European border control agency Frontex.

Some European countries, including Germany and Italy, have seen an anti-immigration backlash and nationalist political parties gaining support.

The survey found that Swedes were the least likely to express anti-migrant and anti-minority views, while Italians were the most likely.

‘Undercurrents of discomfort with multiculturalism are evident in Western European societies,’ the researchers wrote in the report.

Although Muslim newcomers have been the focus of far-right candidates appealing for votes and activist campaigns to seal Europe’s borders, the survey also asked about attitudes toward Jews in western Europe.

For example, 36 per cent of Italians, more than in any other country, agreed with the statement that, ‘Jews always overstate how much they have suffered,’ compared to the 11 percent of Swedes who did.

One-quarter of all the respondents in Italy – Christian and non-religious combined – said they would not be willing to accept a Jew as a family member.

The comparable figure in Britain was 23 percent, in Austria 21 percent and 29 percent in Germany.

However, anti-Muslim sentiment exceeded anti-Semitism in every country.

A hotly debated question in some parts of Europe is whether Muslim women should be prohibited from wearing concealing garments such as burkas.

Some 30 per cent of those surveyed in Italy, 28 per cent in Belgium and 24 per cent in both Germany and Austria agreed that Muslim women ‘should not be allowed to wear any religious clothing.’

Across the 15 countries where people were surveyed, the median was 22 per cent, while half agreed Muslim women should be able to wear religious clothing as long as it does not cover their faces.

Pew said the survey had a margin of error of 2.7 to 3.3 percentage points depending on the number of people questioned in each country.