US president Donald Trump on Thursday said he and Kuwaiti emir Sheikh Sabah could resolve the Qatar crisis and offered direct US mediation in the four month dispute “right here in the White House.”

But he warned Qatari financing of terrorism had to end.

“While I do appreciate and respect the mediation, I would be willing to be the mediator,” Mr Trump said, standing alongside Sheikh Sabah after their meeting at the White House. “I do believe we will solve it …if we don’t solve it, I will be a mediator right here in the White House” and “we will have something very quickly.” He added, “if I can help mediate between Qatar and, in particular, the UAE and Saudi Arabia, I would be willing to do so.”

Mr Trump emphasized the Gulf Cooperation Council’s (GCC) unity in his effort to find a solution. “We will be most successful with a united GCC…we are addressing the ongoing GCC dispute and hopefully it will be resolved very soon.” Without mentioning Qatar by name, Mr Trump named the threats of ISIL, Iran’s activities, and counter-terror financing as challenges that face Kuwait and its Gulf neighbours.

“This has begun because of the massive funding for terrorism. If they can’t stop funding terrorism, I don’t want them to come together.”

The UAE, Saudi Arabia, Egypt and Bahrain have slapped travel, trade and diplomatic bans on Doha over its support for terrorism and interference in internal affairs of its neighbours.

Sheikh Sabah called Mr Trump a friend, and said: “I am optimistic of a resolution. The hope has not ended. Qatar is ready to discuss and fulfil demands and negotiate with us all. If we sit we will be able to resolve the 13 demands.”

The government in Doha announced that Mr Trump spoke with the Qatari Emir Tamim bin Hamad Al-Thani also on Thursday.

The two-hour meeting during the emir’s visit focused mainly on ways to deepen US-Kuwaiti security, counter-terrorism and economic relations.

But Kuwait’s  neutrality in the GCC and challenges over the Qatar crisis, counter-terrorism and Iran’s meddling in the region were key items.

“The emir of Kuwait is a very special person who I’ve gotten to know actually over the years,” Mr Trump said while welcoming Sheikh Sabah.

“I want to thank you very much for being our guest at the White House and for all of your representatives.”

Following the press conference, an invigorated Mr Trump tweeted “together, we will show the world that the forces of destruction and extremism are NO MATCH for the BLESSINGS of PROSPERITY and PEACE!” 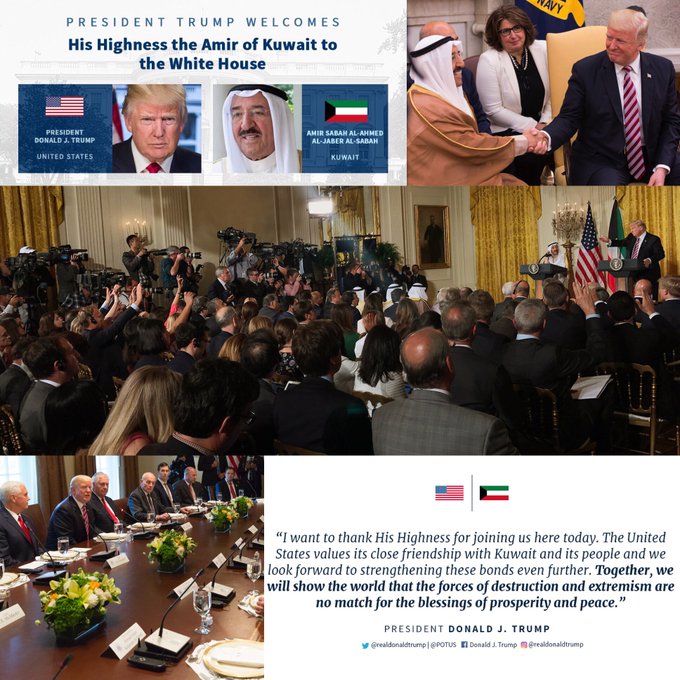 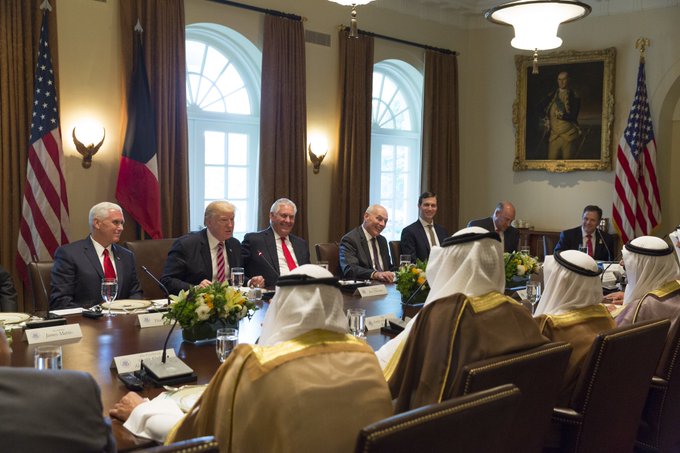 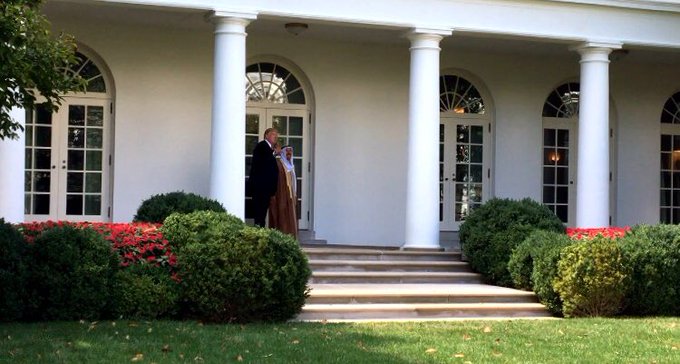 Together, we will show the world that the forces of destruction and extremism are NO MATCH for the BLESSINGS of PROSPERITY and PEACE!

Mohammed Al Yahya, of the Atlantic Council, said: “The Gulf rift is definitely among the top items on the agenda for both parties but Kuwaiti-US relations are about much more than just that.

“Kuwait has long played an important role as a neutral conciliatory actor both in the Gulf and in the wider region.”

Before his visit, Sheikh Sabah spoke with the leaders of Saudi Arabia, Bahrain, Qatar, and Egypt, while Mr Trump spoke to Saudi King Salman.

The White House said Mr Trump “discussed ways to continue advancing shared priorities, including enhancing security and prosperity in the Middle East”, during his conversation with the Saudi King on Wednesday, the second in a week. They also “agreed that King Salman will visit the White House in early 2018”.

Last Wednesday, Mr Trump “urged that all parties to the Qatar dispute find a diplomatic resolution that follows through on their commitments made at the Riyadh Summit, to maintain unity while fighting terrorism”.

However, “things are not looking good in terms of finding a lasting solution for the Gulf crisis”, Mr Al Yahya told The National. “The Qataris have doubled down on their information campaign against the boycotting nations and are publicly moving closer to the Iranian camp.”

Instead, what the Kuwaiti-US meetings may accomplish is progress on the bilateral front and issues related to trade, counter-terrorism, and investments. A White House official told The National the three-day visit coincides with the second annual US-Kuwait Strategic Dialogue, which will convene cabinet-level meetings on education, trade, investment, homeland security, and military co-operation.

“Economic cooperation and counter-terrorism finance coordination are critical for both countries,” Mr Al Yahya said. On Wednesday, the US Chamber of Commerce hosted the first US-Kuwait Economic Forum, with the participation of secretary of commerce Wilbur Ross.

A memorandum of understanding on joint co-operation in the petrochemical industry between the Kuwait Petroleum Corporation and Dow Chemical Company was among several agreements that were signed, the Kuwait News Agency (Kuna) said.

Defence relations and boosting Kuwaiti armed forces were also expected to come up during the visit.

Iran’s destabilising role was also expected to come up in the discussions. In July, Kuwait ordered Iran to reduce its diplomatic presence in the country and expelled 15 of the embassy’s 19 diplomats, including the ambassador.

Mr Al Yahya said there was “a golden opportunity for the US to work with committed partners in the region to counter Iranian destabilising policy”.

He mentioned additional targeted sanctions on Iranian actors coordinated with the GCC, and drawing up a serious plan to solve the problem in Syria as two areas of potential cooperation between Mr Trump and Gulf partners.