BRUSSELS (AP) – President Donald Trump on Thursday forecast an unspecified “escalation” between the United States and Iran following his withdrawal from a landmark deal that provided sanctions relief for Tehran in exchange for curbs on its nuclear program.

Trump’s remarks came as his administration pressed European nations at a NATO summit to cut off all funding that Iran may use to foment instability in the Middle East and beyond.

Trump asserted that Iran was now treating the U.S. with more respect, although there’s no evidence to support that, and predicted Tehran will seek negotiations as reimposed sanctions bite. 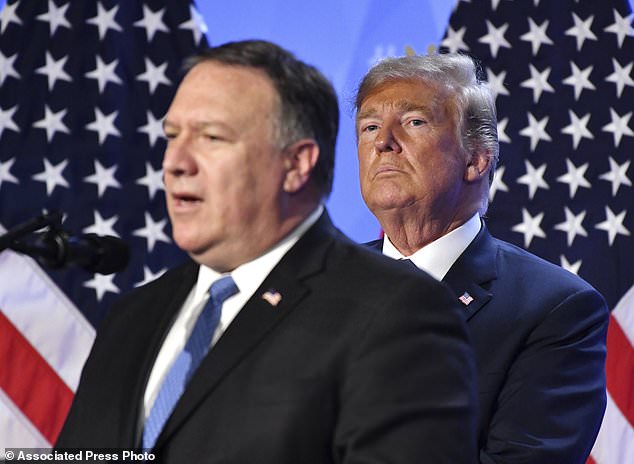 “I would say there might be an escalation between us and the Iranians,” Trump said at a news conference in Brussels.
“They’re treating us with much more respect right now than they did in the past and I know they’re having a lot of problems and their economy is collapsing. But I will tell you this, at a certain point, they’re going to call me and they’re going to say ‘Let’s make a deal,’ and we’ll make a deal.’ But they’re feeling a lot of pain right now,” he said.

After the NATO summit ended Thursday, U.S. Secretary of State Mike Pompeo met with European officials to make the case for clamping down on Iranian “terrorism and proxy wars.”

“We ask our allies and partners to join our economic pressure campaign against Iran’s regime,” Pompeo said in a tweet before the talks.

“We must cut off all funding the regime uses to fund terrorism and proxy wars. There’s no telling when Iran may try to foment terrorism, violence & instability in one of our countries next.” The tweet was accompanied by a map accusing Iran of sponsoring at least 11 terrorist attacks in Europe since 1978.

In another post, Pompeo said “Iran continues to send weapons across the Middle East, in blatant violation of UN Security Council resolutions. Iran’s regime wants to start trouble wherever it can. It’s our responsibility to stop it.”