While residents in Abu Dhabi, Dubai, and Sharjah are faced with scorching heat at temperatures over 50 degrees Celsius, the scenario is entirely different at the other end of the UAE.

The National Centre of Meteorology and Seismology (NCMS) said that by 3pm on July 3, the highest temperature was recorded at Mezaira, in Abu Dhabi, at 51 degrees Celsius.

The lowest temperature was 22.6 degrees Celsius recorded at 5.30am on Tuesday, in Damtha.

For the rest of the day, residents in interiors can expect very hot weather in general, which will be hazy throughout the day.

Temperature will peak at 50 degrees Celsius in internal areas, and reach as high as 45C and 42C in coastal and mountain areas respectively.

However, weather forecasters expect a chance of some convective clouds over eastern and southern areas by the afternoon, which may be accompanied with some rain towards east.

This is the second day in a row that these areas will experience rainfall.

On Monday, residents took to Twitter to share videos of rain in the eastern areas of Al Madam and Al Shuaib.

Light to moderate winds will also blow across the UAE, bringing in dust and sand over exposed areas. 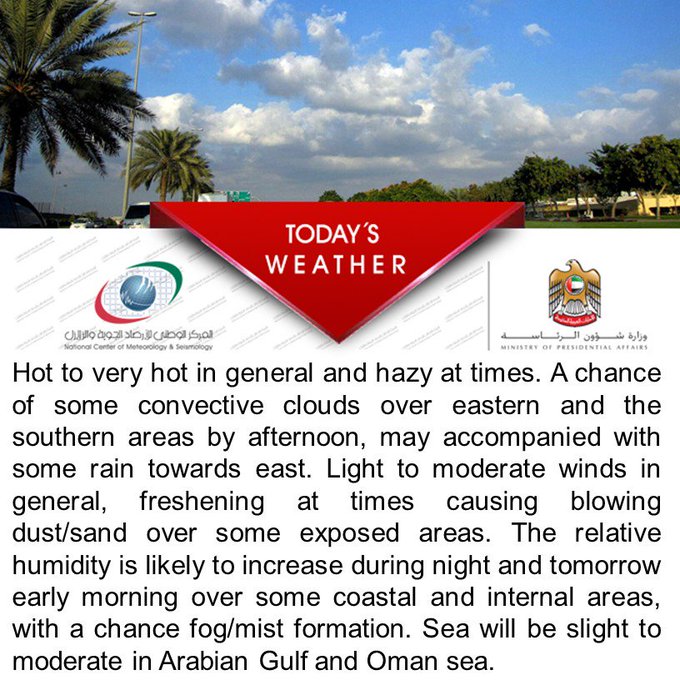 The level of humidity is also expected to increase at night and into Wednesday morning, which above 90 per cent, will create fog and reduce visibility across the roads.