Tensions between Gulf neighbors Qatar and the United Arab Emirates (UAE) now appear to be playing out in the skies.

The UAE’s General Civil Aviation Authority called Monday’s alleged Qatari interception “a flagrant and serious threat to the safety of civil aviation and a clear violation of international laws and conventions.” 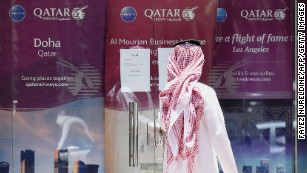 The civilian aircraft, which were en route to Bahrain International Airport, had all the necessary permits for their journeys, added the Emirati aviation authority in a report on state-run news agency WAM.
One of the aircraft was an Emirates airline plane, according to a statement issued by the Bahraini Foreign Ministry.
According to flight tracking websites Flight Radar 24 and Flight Aware, the flight, Emirates 837, landed in Bahrain Monday morning around an hour after its scheduled arrival time. The sites also show the flight took off an hour late. CNN has reached out to Emirates for comment.
It is unclear which airline the second aircraft belonged to or whether it landed in Bahrain as planned.
Bahrain’s Ministry of Foreign Affairs said in a statement that the “hostile behavior by Qatar against civil aircrafts has become frequent in recent times” and “poses a threat to the lives of civilians.”

The spokesperson for Qatar’s Ministry of Foreign Affairs, Lolwah Alkhater, denied the claims on her official Twitter account, saying they were “completely false.” 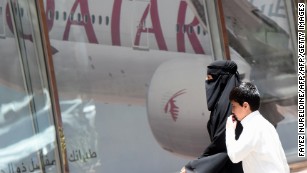 The alleged incident flare-up comes days after Qatar filed a report to the UN Security Council about UAE military jets allegedly violating Qatari airspace, the Qatar Ministry of Foreign Affairs said in a statement.
Qatar’s UN Ambassador Alya Al Thani described the incidents as a “flagrant violation of the sovereignty and territorial integrity of the State of Qatar, as well as a flagrant violation of the provisions of international law, conventions, charters and international norms,” according to the statement.
The UAE Minister of State for Foreign Affairs, Anwar Gargash, responded by condemning Qatar’s complaints on his official Twitter page, calling the allegations “incorrect” and “confused.”

The latest allegation of flight interceptions comes after a member of Qatar’s royal family said Sunday he is being held against his will in the UAE, a claim disputed by the UAE government, which said he is free to move as he pleases.
Qatari Sheikh Abdullah bin Ali Al Thani, the brother of Qatar’s former ruler, said in a video on Twitter that he is “in a state of captivity” in Abu Dhabi.
The UAE, along with Saudi Arabia and Bahrain, cut diplomatic and economic ties with Qatar last year. They accused Qatar of funding terrorism, a charge it denies.
Gulf neighbors have also criticized Qatar for an increasingly close relationship with Iran.
READ  UAE work permit fees linked to company classification

Emirates A380 flights to Moscow resumed due to increased demand

Emirates to resume flights to Bangkok from September 1

Emirates to serve all ‘network destinations’ by summer 2021

Emirates to operate one-off A380 flight to Clark

UAE limits family gatherings to not more than 10 people