Iran’s Revolutionary Guards said on Saturday that the US Navy had approached their patrol vessels in the Gulf and fired flares in what it called a provocative move yesterday afternoon.

In a statement, the Guards said: ‘The supercarrier USS Nimitz and its accompanying warship, while being monitored by the Guards’ frigates, flew a helicopter near the Resalat oil and gas platform and approached the force’s ships.

‘The Americans in a provocative and unprofessional move, sent a warning message to the frigates and fired flares.’

An Iranian vessel making a close approach to a US coastal patrol ship USS Thunderbolt, right. The US Navy patrol boat fired warning shots near the Iranian vessel that American sailors said came dangerously close to them during a tense encounter in the Gulf. Iran’s Revolutionary Guard later blamed the American ship for provoking the situation 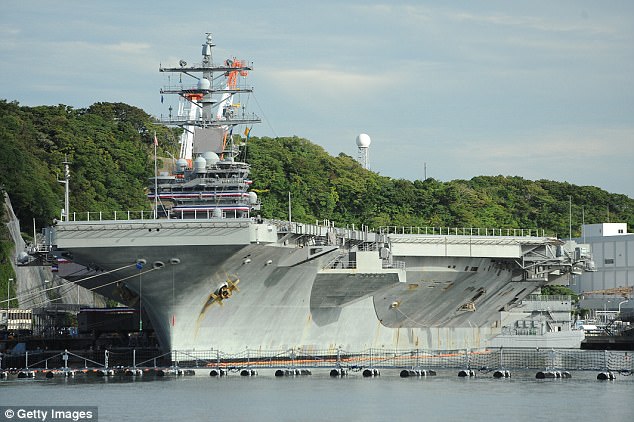 The nuclear-powered, Nimitz-class USS Ronald Reagan is seen docked at Yokosuka U.S. Naval Base at Yokosuka in southern of Tokyo in Kanagawa Prefecture, Japan, on October 02, 2015. Iran say this ship was among the fleet that fired the warning shots at one of its patrol boats

The Guards ‘ignored the unconventional move by the US ships and continued their mission, after which the supercarrier and its warship left the area,’ the statement added.

On Tuesday, a US Navy patrol ship fired warning shots at a Guards boat in the Gulf as it closed in on the American vessel, US officials said.

The Guards denied approaching the US ship on that occasion and said it was the American vessel that had been at fault.

There have been a string of close encounters between US ships and Iranian vessels in the Gulf in recent months.

In January, the USS Mahan destroyer fired warning shots at four Iranian Revolutionary Guard vessels that approached at high speed in the Strait of Hormuz, which connects it to the Indian Ocean.

The force’s boats periodically approach US warships in international waters and the Strait of Hormuz, ignoring US radio messages and giving little indication of their intentions.

In January 2016, the Iranians briefly captured the crew of two small US patrol boats that strayed into Iranian waters.

The 10 US sailors were released 24 hours later.

The latest incident comes after the US Congress approved new sanctions against Iran.

Today, Iran condemned new sanctions passed by the US Congress against its missile programme, which President Donald Trump is set to sign into law, and vowed to continue it.

‘We condemn the hostile and unacceptable action,’ he said of the sanctions.

Classes to resume at British School of Bahrain tomorrow