I’m not someone who collects things. I like to live as simple and unencumbered a life as is possible. But I have one exception to this, and that is luxury watches – they don’t require much storage space, require minimal maintenance, don’t devalue (provides you buy them right) and I love looking at them as object of art. I first became aware of the Panerai brand in the early 2000’s. Panerai, a small Florentine watch manufacturer, was established over 150 years ago. They supplied watches for the Italian Navy before and during World War 2 and were particularly favoured by military frog divers because of their large size, robustness, and highly luminous numerals which makes it easy to see in the dark underwater. 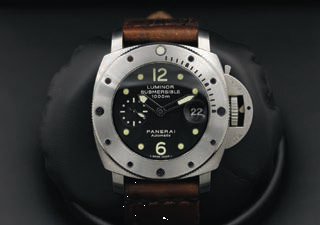 Panerais are instantly recognizable due to their distinctive design and famous patented crown protection guards – often copied by other brands. In 1997 the company was taken over by the Richemont Group, resulting in their value and brand image moving upwards. Panerais are designed to easily change straps and a secondary industry of independent leather craftsmen supply a myriad of strap styles to Panerai owners. I have various straps and regularly interchange them. For some reason I don’t like metal straps when it comes to this brand. They just don’t seem right. I am now the happy owner of four Panerais that I’ve had for many years. They have each been consistently reliable and a pleasure to own:

Panerai 005 and 113 – both these 44mm watches have hand wound mechanical movements. They are probably among the most sought-after Panerai models because in many ways they define the brand. The 113 has a white face and a clear crystal back exposing the watch movement. The 005 has a black face and solid back.

Panerai 243 – This chunky 44mm automatic is designed to go to ridiculous depths of up to 1,000 meters where light no longer penetrates. It has a super thick 5mm crystal and a helium escape Valve (something only a serious diver would ever need). I confess the deepest I’ve taken it so far is along the bottom of the deep end of my swimming pool (2 meters!). 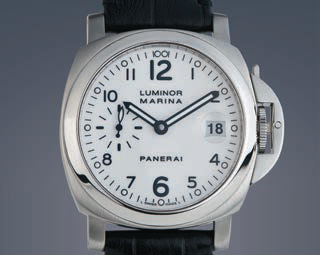 Panerai 049 – At 40mm this automatic is considered small for a Panerai yet is the same diameter, but noticeably chunkier, than a Rolex Submariner. This model is now out of production.

The official dealership for Panerai in Bahrain is Asia Jewellers, Tel. 1753 5344