If it weren’t for a kind-hearted nurse and social media, the family of a Punjabi woman, who had gone to Saudi Arabia as a housemaid, wouldn’t have come to know about her torturous existence there, nor could she have returned home.

The woman, Sukhwant Kaur, 55, was sold as a housemaid for Rs 3.5 lakh [approx US$600) to a Saudi Arabian family by an illegal travel agent in January. During her 5-month service with her ‘owners’, she had to endure blows, slander and often go without food. Ultimately, she fell severely ill and was admitted to hospital.

On her return from Saudi Arabia via Mumbai on Wednesday, Sukhwant told TOI, “There was a nurse from Kerala who realized the trouble I was in and called my family.” Sukhwant, a resident of Ajtani village in Nurmahal subdivision of Jalandhar district, said she was forcibly made to work morning till midnight and even forced to eat meat despite being a vegetarian.

She said she had gone to Saudi Arabia in January to augment her husband’s income and help repay their loans.

Her husband Kulwant Singh said, “Initially, she used to call me often, but then her calls stopped all of a sudden, which had us worried. I came to know about their condition on May 7 when I got a call from the UAE hospital. One of my friends suggested that I send a message to external affairs minister Sushma Swaraj on Twitter. Thankfully, she responded quickly and my wife is back home 24 days later. 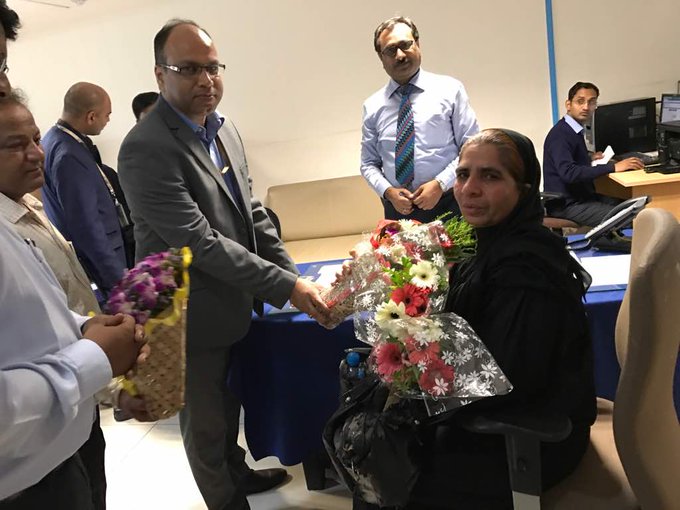 Sukhwant said the travel agent, Pooja, had taken Rs 40,000 from her and sold her to the Saudi family for a higher sum.

The woman was flown to Mumbai with the help of Indian Embassy officials in Saudi Arabia. The government arranged for her travel to Amritsar since she had no money. Her eyes brimming over, her daughter Ranjeet Kaur said that she could never ever imagine that Sukhwant was sold like a commodity and expressed gratitude towards the government for rescuing her mother. The travel agent has been held by Mumbai police.