Sri Lanka’s President Gotabaya Rajapaksa has said he will step down on July 13 following protests that shook the country Saturday, in which first thousands of protesters earlier stormed his residence and later set Prime Minister Ranil Wickremesinghe’s private home on fire.

Parliament Speaker Mahinda Yapa Abeywardena said he was informed by the president of his intention to step down.

It comes after Rajapaksa’s official residence was earlier stormed by protesters demanding his resignation after months of unrest over Sri Lanka’s economic crisis. The private home of Prime Minister Ranil Wickremesinghe was later set on fire by protesters just hours after he said he would resign. We don’t yet know the whereabouts of the PM at the time it was set alight.

The unrest between protesters and police has intensified outside Wickremesinghe’s residence in the country’s capital Colombo.

As the protests continue, the exact location of Rajapaksa remains unknown after he earlier fled his official residence. Rajapaksa was escorted to safety after people gathered outside the gates, and he is being protected by a military unit, a top defence source told the AFP news agency. However, there are reports that he’s next to Colombo Port amid claims “that two ships that docked at the port were seen loading some travelling bags, suggesting that the president is going to leave”.

Sri Lanka down to last day of petrol, says PM

Sri Lanka down to last day of petrol, says PM 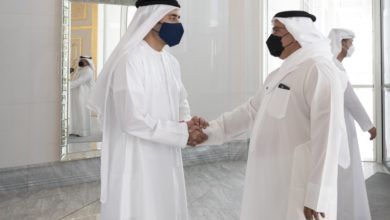 HRH arrives in UAE to extend his condolences to UAE President